In order to keep warm during cold exposure, heat production must be increased. This can be achieved through non-shivering and shivering thermogenesis. The main tissue involved in non-shivering thermogenesis is brown adipose tissue (BAT) which is located in discrete depots around the body. The activity of BAT is reduced with obesity and diabetes, so interventions increasing the amount of BAT could be important in preventing these types of ill-health. Potential approaches to increase the amount of BAT would be to transplant brown-like cells back into patients in order to stimulate their metabolism, or identify treatments able to increase the amount of existing BAT directly. 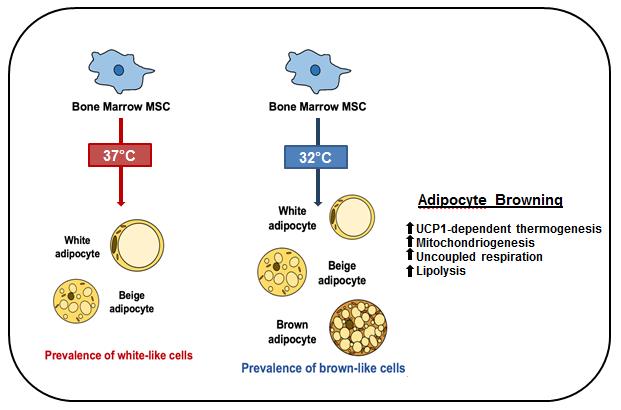 The primary marker of BAT is the presence of a unique mitochondrial uncoupling protein (UCP)1, so we examined whether mesenchymal stem cells isolated from bone marrow could be used to generate more adipocytes containing this protein. We thereby developed a cell model to induce adipocyte browning which relied on differentiation at a cool temperature of 32°C instead of the usual temperature of 37°C. The low temperature promoted browning in adipogenic cultures of both mouse and human origin, with increased adipocyte differentiation and upregulation of adipogenic and thermogenic factors, especially UCP1. These cold-exposed cells exhibited enhanced uncoupled respiration (a unique characteristic of UCP1) and metabolic adaptation. They also showed a marked translocation of leptin (a hormone classically considered to be involved in controlling food intake) into adipocyte nuclei, suggesting a previously unknown role for leptin in the production of BAT. These results indicate that bone marrow-derived mesenchymal stem cells can be driven to forming brown-like (or beige) adipocytes in vitro by exposure to a reduced temperature. This type of in vitro model now provides a powerful tool to elucidate the precise role of leptin and related hormones in the browning process. Ultimately, it may enable the production of BAT that could then be transplanted into relevant patient groups to treat obesity related diseases.