In recent years approval has been granted to many therapeutic agents for the treatment of patients with metastatic melanoma. They include small molecule inhibitors, such as the selective inhibitors of the mutant BRAF (BRAF-I) or of MEK (MEK-I), and immunotherapeutic agents, such as monoclonal antibodies targeting the immune checkpoint molecules Cytotoxic T-Lymphocyte Antigen 4 (CTLA-4), Programmed Death 1 (PD-1) and Programmed Death Ligand 1 (PD-L1). Results of clinical trials have convincingly shown that these therapeutic agents increase the frequency and extent of clinical responses and prolong the overall survival of treated patients with metastatic melanoma as compared to standard chemotherapy. However the efficacy of both types of therapies is limited. Drug resistance represents the major obstacle to the successful application of BRAF-I and/or MEK-I in the treatment of metastatic melanoma carrying an activated BRAF. Immune escape mechanisms represent the major limitation to the therapeutic efficacy of immunotherapeutic agents. These clinical findings in conjunction with the need to develop effective and lasting therapies have prompted the design of combinatorial strategies which utilize both targeted and immunotherapeutic agents. It is noteworthy that so far no clinical trial has shown that any of the described strategies which combine these two types of agents prolongs melanoma patients’ overall survival. 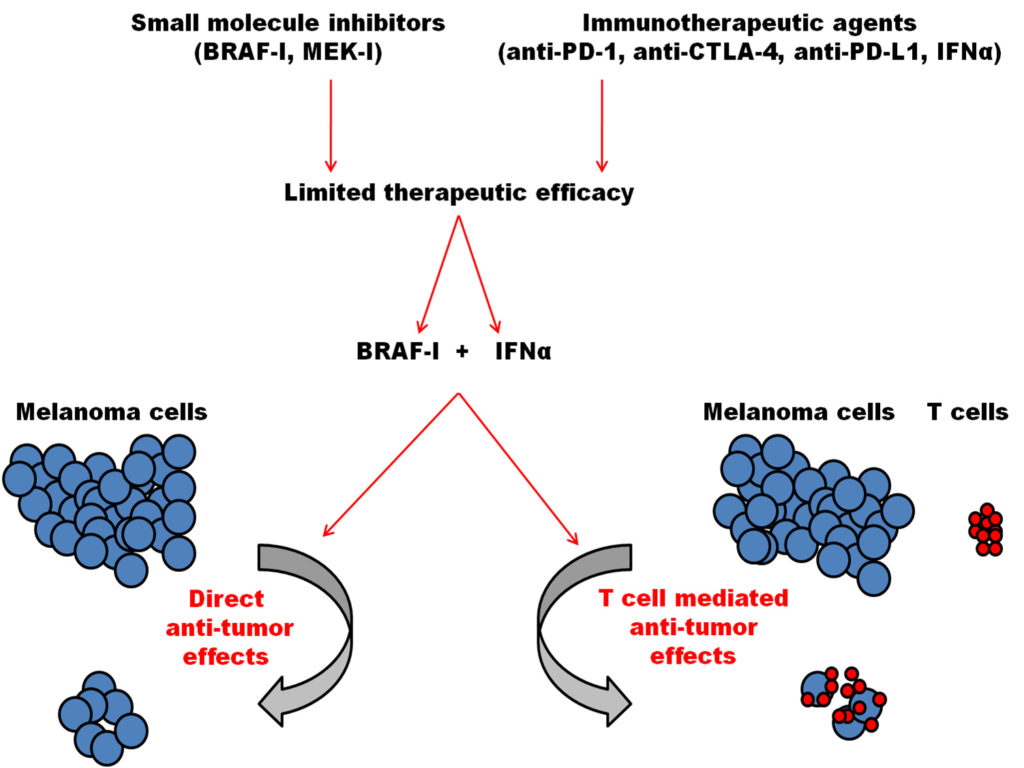 Rationale underlying the use of BRAF-I and IFNα combination for the treatment of BRAF mutant melanoma cells.

In their recently published paper Sabbatino et al. provide experimental evidence which justifies the combination of BRAF-I with interferon alpha (IFNα), a cytokine currently used for the adjuvant treatment of high risk melanoma patients. Specifically, they show that melanoma cells carrying a mutant BRAF display a down-regulation of type I IFN-α receptor-1 (IFNAR-1).  This receptor, which mediates the anti-proliferative, pro-apoptotic and immunomodulatory activity of IFNα, is down-regulated in mutant BRAF melanoma cells because of an increased ubiquitination and degradation by βTrcp2/HOS protein, an E3 ubiquitin ligase. The latter is up-regulated by ERK activation which is induced by the activated BRAF.

In vitro treatment with BRAF-I and IFNα combination  up-regulated IFNAR1 expression level on BRAF mutant melanoma cells and enhanced their susceptibility to the anti-proliferative and immunomodulatory activity  of IFNα. As a result the BRAF-I and IFNα combination enhanced significantly more than the individual agents the expression of HLA class I antigen processing machinery components and melanoma antigens by BRAF mutant melanoma cells. This led to their increased recognition and destruction by T cells genetically engineered with T cell receptors specific for  HLA class I antigen-melanoma antigen derived peptide complexes expressed on targeted melanoma cells.

The in vivo relevance of these in vitro results is indicated by the statistically significant survival prolongation of immunodeficient mice transplanted with human BRAF mutant melanoma cells, and treated with BRAF-I and IFNα combination. The latter also enhanced the efficacy of adoptive immunotherapy with genetically engineered T cells in immunodeficient mice grafted with BRAF mutant melanoma cells.

In conclusion the results  obtained by Sabbatino et al in vitro.and in animal model systems have provided a strong rationale to translate to a clinical setting the novel  BRAF-I and IFNα combination for the treatment of melanoma patients carrying a mutant BRAF. The results of the clinical trials which have been implemented will assess the clinical relevance of the experimental results described by Sabbatino et al.