Brain imaging of the oldest old who aged successfully

The oldest old, defined as 90 years and over, is the fastest growing segment of the population worldwide. Dementia is one of the major health challenges at this age, since the risk of dementia increases steadily with ageing. However, dementia is not inevitable even if individuals live well into the 10th decade of life. Those oldest old who are dementia free could, therefore, serve as a model of successful cognitive ageing. This study aims to characterise the brain imaging of those oldest old who aged “successfully” without dementia. The uniqueness of this study is the large sample and its focus on dementia-free ageing in exceptional longevity. 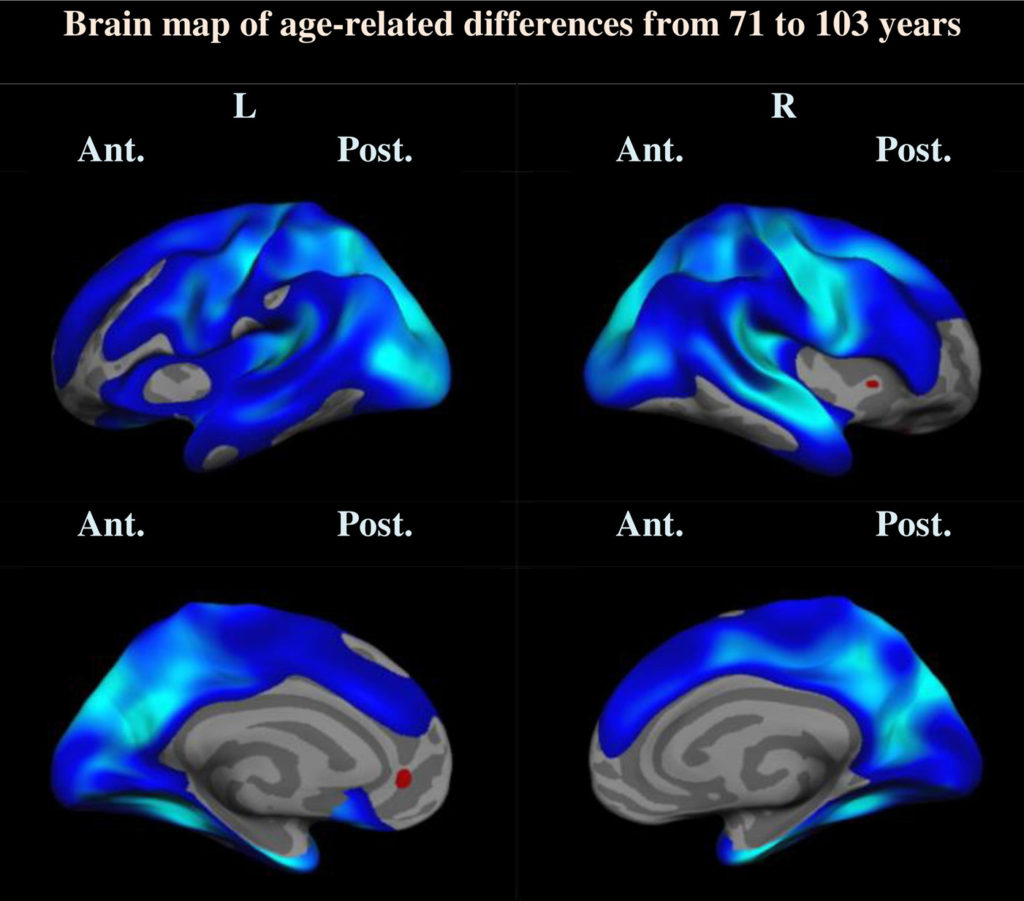 We examined 277 participants, including 70 oldest old, who underwent a comprehensive neurocognitive assessment and a brain magnetic resonance imaging (MRI) in the Sydney Memory and Ageing Study and Sydney Centenarian Study in Australia. All participants were diagnosed as dementia-free by expert consensus upon review of their assessments. MRI-derived brain measures, including brain structures and cerebral vascular lesions, were quantified using neuroimaging software packages. The differences in measures on brain imaging were then related to age (ranging from 71 to 103 years), and the age groups of the young old (71 – 89 years) and oldest old (90+ years) were contrasted.

The results showed that the brains were smaller and had more cerebral vascular lesions (more specifically white matter lesions) as individuals aged. These age-related differences were not homogenous across the brain, i.e. some areas had substantially larger age-related decline than others. Such heterogeneity in brain ageing is demonstrated in Figure 1 using a brain map, with the most prominent decline being in the temporal, parietal and occipital regions as shown by the brightest colours. This pattern was further confirmed by comparing the oldest old directly with their younger counterparts.

Brain loss in the oldest old is most focussed on the hippocampus and its surrounding structures, comprising the medial temporal lobe. It is regarded as the key structure in memory, which is a cognitive domain quite vulnerable in ageing.

Other age-sensitive brain areas in the oldest old comprised the primary sensory cortex (for auditory and visual perception) and some brain regions that are typically involved in Alzheimer’s type dementia. Involvement of these “posterior” regions is not generally seen in younger elderly, and seems to be unique to the oldest old who aged without dementia. The underlying reason for these findings is not clear. We speculate that prominent brain loss in primary sensory cortex is related to the extremely common hearing and visual impairment in the oldest old, and may be common in the process of ageing. Furthermore, the neuroimaging profile of successful ageing at very old age is found to share some similar features of ageing with Alzheimer’s disease in young elderly. The fact that these individuals experience such brain changes and yet remain dementia-free suggests that there are some incompletely understood resilience factors that warrant further investigation.

This is the first study examining the brain imaging of a large oldest old population. Given the global increase in the very old population, results of this study should prompt further investigation to inform strategies for dementia prevention.