Melanoma is an aggressive and potentially fatal type of skin cancer.  Once a suspected melanoma has been cut out, a pathologist will look at it under a microscope to confirm the diagnosis and measure its “Breslow thickness”. Breslow thickness is the term used to describe the thickness of a melanoma, in other words, how deeply the melanoma has extended under the skin. This melanoma thickness measurement is then used to decide the “stage” of the cancer. This cancer stage, in turn, guides the decision about which treatments to use. For example, if a person has a stage T2 melanoma (Breslow thickness equal to or greater than 1.0mm), sampling a “sentinel” lymph node to determine whether there is any tumor spread to the lymph node is usually recommended, as well as a wide surgical excision of the primary melanoma site. However a stage T1 melanoma (less than 1.0mm) does not usually require this extra surgery. A Breslow thickness of 1.0mm is also the cut-off between a stage “T1” and a stage “T2” melanoma, so it is important for measurements around this point to be as accurate as possible. 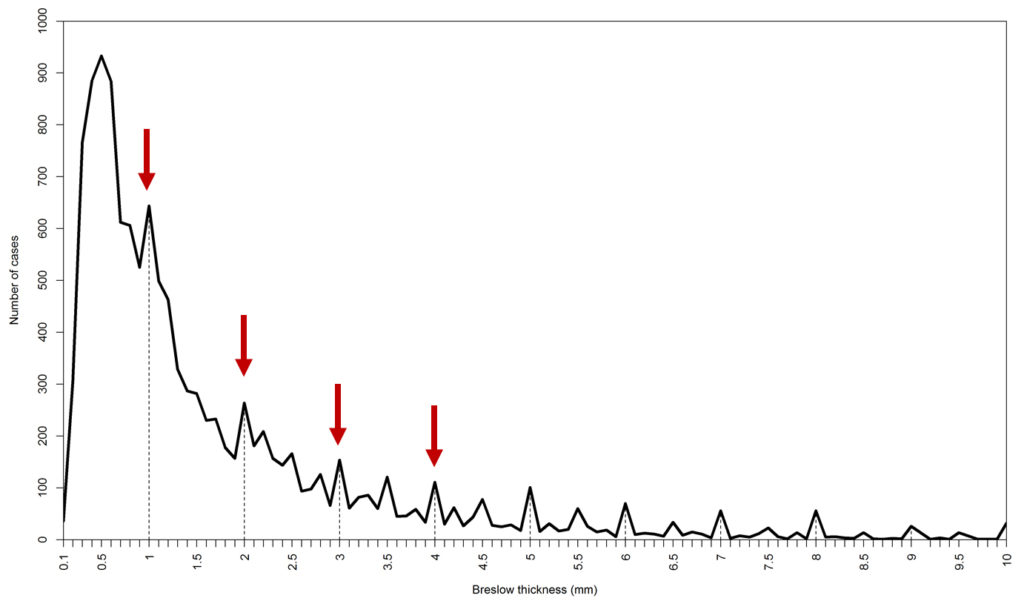 We therefore undertook a study to try to determine why these measurement abnormalities were occurring. From our database, we took 125 melanoma samples that had previously been reported to be between 0.9mm and 1.1mm thick. Two pathologists then independently re-measured the Breslow thickness and recorded their findings.

The new re-measurements did not show an abnormally high number of melanomas exactly 1.0mm thick, but an even spread of thicknesses between 0.9-1.1mm. The two pathologists had very similar results, meaning they were likely very accurate in their measurements. This confirmed our theory that there is no natural reason for so many melanomas to be reported as exactly 1.0mm thick, and that instead there must be issues with the measurement of Breslow thickness. Based on the new measurements, many of the melanomas in the patients in our study would have been staged differently. This means that some of the melanomas may have been under-treated, whereas others may have been over-treated.

As part of the study we examined possible reasons why so many melanomas are reported as exactly 1.0mm thick. One possibility is the phenomenon of “terminal digit bias” – which is a psychological tendency to choose round number (0s), halves (5s) or even numbers when there is an uncertain or borderline measurement. Another possible cause may be the lack of standardized guidelines for pathologists, leading to differing and inaccurate measurements.

We suggest that educating pathologists to recognize and avoid terminal digit bias and standardizing their measurement guidelines for melanomas may improve accuracy around the important cut-off points for Breslow thickness measurements. Clinicians should also be educated to understand that Breslow thickness measurements have an inevitable margin of error, and to take this into account when making treatment recommendations for patients with melanoma.