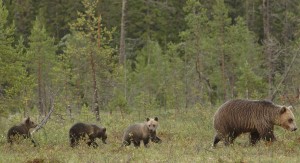 The study of animal personality is of growing interest in ecology and evolution. For example, differences in boldness among individuals can have an important impact on survival, reproductive success and even population dynamics. To overcome the anthropocentric views and interpretations of personality and to adequately study personalities of wild animals, we use rigorous statistical analyses applied on very detailed individual data. To do so, we captured more than 30 brown bears and equipped them with GPS collars programmed to take a location every 30 minutes. We coupled GPS relocations with information on habitat types, and used the data to explore the differences in habitat selection of bears. Now, with all these data, how can we determine if bears displayed animal personality? We performed so-called repeatability tests. This statistical technique allowed us to show that there are pronounced differences among individual bears in how they select their habitat, or in other words, that brown bear displayed habitat selection personality. For example, some bears always selected for forest cut blocks more strongly than others, while other bears always avoided bogs more strongly than others. 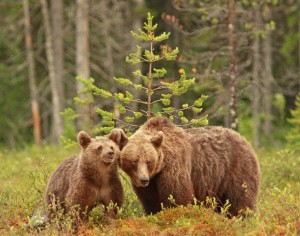 Second, our results showed variation between individuals, which is the raw material needed for evolution to occur. Brown bears are hunted in Sweden and hunters might select, consciously or not, bears that display a specific habitat selection patterns. For example, hunters likely kill more bears in habitats that are more accessible for humans (e.g., closer to roads), or in habitats with higher visibility, such as bogs or cut blocks. If hunters exert a selective pressure and if habitat selection of bears is a heritable personality trait, then evolutionary consequences in habitat selection are expected.

Finally, as we showed that bears had large personality differences in their preference of certain habitat types, managers could use this information to develop more “personalized” solutions when facing problematic bears, when developing conservation areas, or to increase the success rate of reintroduction programs.