Building and rebuilding gastric epithelium: Trop2 as a common denominator

In mammals, the stomach is lined by a contiguous layer of cells called epithelium, further organized into units called glands. Gastric glands are divided into two areas: corpus and antrum, according to their specific function depending on the type of cells that they contain. The corpus is composed by chief and parietal cells that release enzymes and hydrochloric acid needed for digestion and mucus producing-cells in order to protect the mucosa. In the antrum, there are mainly mucus producing-cells as well as endocrine cells which produce hormones or peptides as local messengers. The gastric epithelium is constantly renewed thanks to a definite type of cells designated adult stem cells (ASC) residing in the glands. These epithelial ASC are capable of dividing indefinitely giving rise to daughter cells that can maintain their own pool (self-renewal capacity) or differentiate into the short-lived specialized cells described above. In mice as well as in humans, ASC can be identified by peculiar markers specifically present on their cell surface; the receptor Lgr5 is the one used to label antrum ASC (referred as Lgr5+ cells). When Lgr5+ cells are isolated, they can be cultured in petri-dishes as “mini-glands”. These mini-glands are very small tridimensional structures mimicking the real glands, i.e. containing both ASC and differentiated cells (Fig. 1). This tool is very useful to study cell requirements or drug effects, for example, over the different cell types. 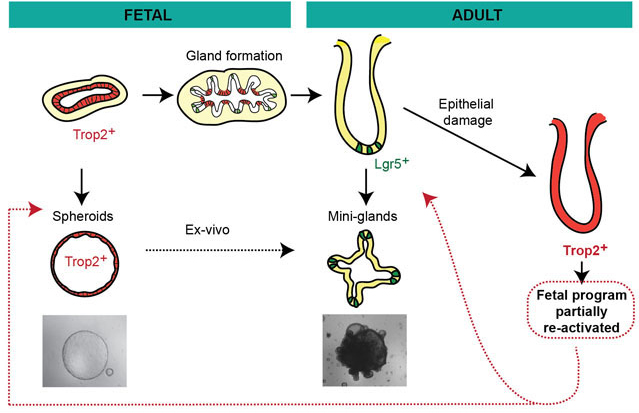 Many studies have addressed the role of Lgr5+ cells in adults and defined the conditions for growing the “mini-glands”, but little was known till recently about the fetal cells that are involved in the initial gland formation stage. Are these cells the same as the adult Lgr5+ ones? Do they grow as mini-glands in a dish? If not,… what is their ID card, i. e. their genetic expression profile? Moreover, which is the identity of the cells involved in adult tissue reconstruction after local injury?

To answer these questions, we isolated mouse fetal cells from the antrum and cultured them in 3D. Similarly to ASC, they grow indefinitely showing high self-renewal capacity, however they generate tridimensional structures very different from the adult-type mini-glands. Indeed, unlike Lgr5+ ASC, fetal cells grow as hollow homogeneous spheroids that do not generate specialized daughter cells and can be identified by the surface marker Trop2/Tacstd2 (Fig. 1).

Remarkably, these fetal Trop2+ cells share many characteristics with the ones similarly identified during small intestinal morphogenesis. A “progenitor signature” made of more than 600 genes commonly expressed by these cells originating from different tissues has been defined. Like an ID card, this signature identifies fetal Trop2+ cells, only transiently present during gastric and intestinal development, which are devoted to build brand-new tissue prior emergence of definitive ASC.

Finally, what makes Trop2 a very interesting marker is the fact that it re-appears in adult gastric epithelium after damage induced either by specific killing of Lgr5+ ASC or treatment with the pro-ulcerative drug Indomethacin. Soon after the injury, a regenerative process is engaged bringing short-lived specialized cells near the lesions to completely change their ID expression profile. These cells re-acquire “fetal-like” properties, with transient re-expression of part of the genes belonging to the progenitor signature (around 150 genes), including the Trop2 marker (Fig. 1).

Altogether, these findings shed new light on developmental and adult regenerative processes taking place in the mammalian stomach. Evidences are provided that both transient states, aimed at building or re-building brand-new epithelium, share common molecular pathways. Future research will help to determine if persistence of regenerative processes in adult stomach can be directly associated with development of chronic diseases or cancer.