Bush-cricket males use genital titillators to stimulate females during mating

Mating and the transfer of the sperm from the males to the females are crucial for siring offspring. If a male is unable to attract a female for mating he cannot spread his genes to the next generation. Therefore, the sexual organs are often very complex. This is particularly true for the male’s genital organs of most species. To secure matings, males of many insect species bear genital structures for grasping the females. Some of them have also genitals which may stimulate the females to accept the mating and the transfer of the sperm. 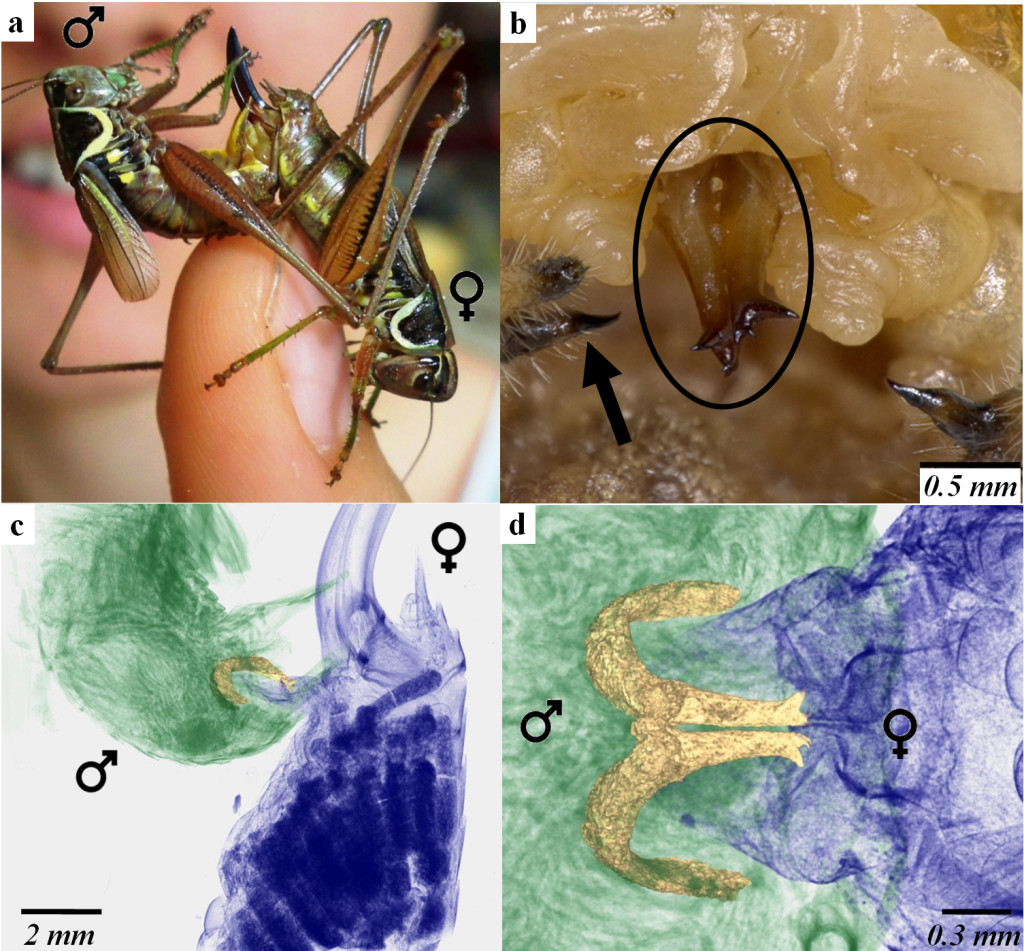 Fig. 1 a) Roesel’s bush-cricket couples are not easily distracted during mating. b) Opened male mating apparatus with a pair of titillators (circle) and two cerci (arrow). c & d). Flash-frozen couple scanned in micro-computed tomography (µCT), titillators are shown in yellow, male in green and female with dark blue eggs in blue. c) Lateral view and d) enlarged detail as viewed from above. (©2015 Elsevier Ltd. All rights reserved. http://www.sciencedirect.com/science/journal/14678039)

Males of Roesel’s bush-cricket possess a pair of elaborated genital appendices (Fig. 1b). Those “titillators” are strongly chitinized and concealed inside the male’s genital chamber. They are only partially visible during copulation. It was not known so far if the structures were used to hold the females or to stimulate them during mating.
We therefore used a unique combination of several biological techniques to analyze the titillator’s form and function for mating. Couples were flash-frozen in liquid nitrogen during copulation and scanned by X-ray micro-computed tomography (µCT) to study the interaction of the male’s titillators with the female’s genitals (Fig. 1 c & d). This was the first time that we were able to visualize how the titillators are inserted inside the females during copulation. Moreover, video recordings of copulating couples in combination with light and scanning electron microscopy as well as histological sections were used.
Males of Roesel’s bush-crickets grasp the females during mating with a pair of claw-like cerci (Fig. 1 b, arrow). The titillators of the males are inserted and retracted rhythmically and repeatedly from the female’s genital opening for a timespan of approximately half an hour. During that time, the titillators touch a soft area of the female’s subgenital plate (Fig. 1 c & d). This area is covered with sensory cells, which indicats that the females could sense the titillators’ tapping.
In a combining study we show that females stay motionless during copulation (Wulff and Lehmann 2015, Biol J Linn Soc). Females resisted those males that had artificially shortened titillators, especially when they had become asymmetric.

The titillators could support the male’s effort to keep the females cooperative in order to allow the males to continue mating and finally transfer it’s sperm to the female’s genitals.