Parkinson’s disease is a common disorder of the brain that affects around 127,000 people in the UK alone. The disease is characterised by the loss of nerve cells (neurons) that control mobility. Symptoms include muscle stiffness, tremor and a slowing of movement. The cause of Parkinson’s in the majority of patients is unknown, but some genes can contribute. The most common genetic risk factor is a mutation in the GBA1 gene which increases the chance of developing the disease by up to 20 times. Why a mutation in GBA1 can lead to Parkinson’s however, is currently unknown. 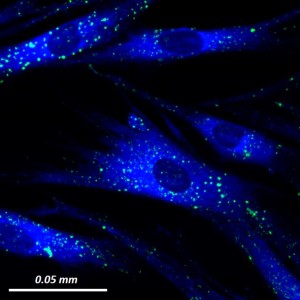 Fig. 1. A microscope image of the ER (blue) and lysosomes (green) inside human skin cells.

Calcium is best known for making bones and teeth solid. However, calcium in dissolved form also plays a vital role within our cells where changes in its levels control almost all processes of life. Inside a cell, calcium is contained inside various specialised structures, including lysosomes (the waste processing system of cells), and the endoplasmic reticulum (ER; where proteins are made). These compartments (pictured in Fig. 1.) often work together to produce a calcium signal which instructs the cell to perform various tasks. When the calcium concentration inside cells is disturbed, diseases (like Alzheimer’s) are known to develop. With this background information, we decided to investigate whether disrupted calcium can also contribute to GBA1-Parkinson’s.

In our study, we measured calcium levels in cells grown from the skin of Parkinson’s patients with mutations in GBA1. Our model used skin cells as it’s difficult to study neurons from living patients. We found that the calcium content of the ER were increased in GBA1-Parkinson’s cells. Intriguingly, this defect was only obvious in younger GBA1-Parkinson’s patients. When healthy individuals age they also exhibit increased ER calcium levels. As ageing is the best known Parkinson’s risk factor, advanced age and GBA1 mutations might increase the risk of getting disease through early changes in ER calcium. 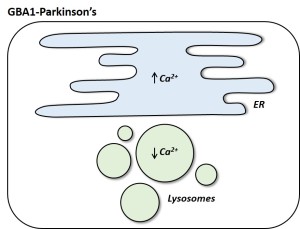 Fig. 2. Calcium levels inside the ER of GBA1-Parkinson’s patient cells are increased, whereas lysosomal levels are reduced. GBA1-Parkinson’s cells also have enlarged and clustered lysosomes.

The gene GBA1 makes an enzyme which breaks down a specific fat molecule inside lysosomes. We investigated whether a loss of GBA1’s ability to digest fat is the reason for disrupted ER calcium. However, we found that inhibiting GBA1 with drugs or removing it altogether with genetic tools did not impair ER calcium levels. We speculate that mutations in GBA1 mis-shape the enzyme causing it to get stuck on the ER (which is where the enzyme is produced) and this is what disturbs ER calcium.

Additionally, we examined the calcium content of lysosomes. In contrast to the ER, we found reduced calcium levels. We also found that lysosomes appeared swollen and clustered in GBA1-Parkinson’s. This is similar to disturbances in cells from Parkinson’s patients with mutations in different genes. This suggests that disrupted lysosomes are a common feature of Parkinson’s.

In summary, calcium has been re-distributed in the cell where the ER has increased, but lysosomes have reduced levels (Fig. 2.). By confirming a role for calcium in Parkinson’s, this work could lay the foundations for developing new drugs.