Can antioxidants benefit the diabetic kidney?

People who have diabetes are at high risk of developing kidney disease that may require dialysis or transplantation. This has been known for a long time but there is still a need for new ways to prevent and treat this disease. So what can a person with diabetes do? One of the causes of the kidney disease is a higher than normal level of damaging molecules called reactive oxygen species (ROS), in the kidneys of people with diabetes. Kidney failure results from damage to both the filtering units, or glomeruli, and the long tubules that help to transport substances both into and out of the urine. Antioxidants can act to neutralize oxidants, including ROS. 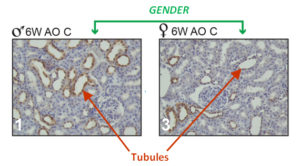 We have shown in a rodent model of Type 2 diabetes (Zucker rat) that putting a unique mixture of antioxidants into the diet can improve kidney function in diabetic females. In the kidney there are certain enzymes called nitric oxide synthases (NOS), which normally produce a beneficial molecule called nitric oxide (NO). NO is important for normal blood flow in the kidney which in turn promotes effective filtration of the urine. However, overproduction of NO can result in increased levels of ROS. We wanted to see if the antioxidant diet had an effect on these enzymes in the kidneys of our rats, and on the damage to the glomeruli and tubules. We studied rats who were on the antioxidant diet starting at four weeks old and compared their kidneys with those of rats on the control diet without added antioxidants. We had 8 different study groups: males and females at 6 and 20 weeks old on control or experimental diet (2 x 2 x 2). We looked at the quantity of sugar-rich molecules called mucopolysaccharides and the size and structure of the glomeruli, as well as location and intensity of staining for the three NOS enzymes in both tubules and glomeruli.

Fig. 2. NOS 3 in kidney of diabetic Zucker rats (brown staining). At both 6 and 20 weeks of age female rats on a regular diet (↓) (Panel 3 and Panel 1) show more staining in glomeruli than is seen in females on the antioxidant (AO) diet (Panel 4 and Panel 2).

We found that eating the antioxidant diet was associated in both males and females with less glomerular mucopolysaccharide content and structural change, a decrease in potentially damaging levels of one of the NOS enzymes (NOS 2) in the tubules of females (Fig. 1) and a decrease in potentially damaging levels of another of the NOS enzymes (NOS 3) in the glomeruli of the females (Fig. 2). We concluded that kidney damage in diabetes is in part due to damage to cells by abnormal expression of NOS and that an antioxidant fortified diet can help ameliorate this in females. We also concluded that this diet partially prevents glomerular damage in both sexes. Thus, persons with diabetes may benefit from incorporating foods with high levels of antioxidants into their diet, under the supervision of their medical care team. Many delicious foods such as berries, beans, dark green leafy vegetables, and nuts are high in antioxidants.