Antibiotic resistance in bacteria is on the rise worldwide, making some previously-treatable infections incurable or even life-threatening. Thus there is a growing need for the discovery and development of new antibacterial methods of disinfection. Ideally these methods should be easy to use, cost effective, and have low toxicity to humans and no resistance from bacteria. 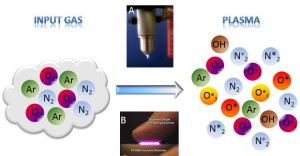 Fig. 1. Atmospheric-pressure plasma devices and their output. An electric current is passed through a flowing gas, producing plasma with a mix of reactive species originating from the input gas as well as the ambient air. Plasma is used for treatment either (A) as an indirect plasma jet or (B) as a direct floating-electrode dielectric-barrier discharge (FE-DBD) plasma.

Cold atmospheric plasma (CAP) has attracted attention as a new tool to eradicate bacteria. Plasma, or ionized gas, is the fourth state of matter. CAP, as the name suggests, is formed at atmospheric pressure, and it produces several molecular, atomic, radical and ionic species that are at close to room temperature. CAP can be generated by a range of devices using different gases (most commonly argon, helium, nitrogen, air or oxygen) or gas mixtures (Fig. 1). Through the generation of a reactive mix of atoms, excited molecules, charged particles, reactive oxygen species (ROS) and reactive nitrogen species (RNS), and UV photons, CAP has been shown to inactivate microorganisms, including bacteria and their spores.

Several studies have shown that CAP can inactivate bacteria. Most of these studies used bacteria growing in liquid culture (planktonic cells) in laboratories. However, the planktonic mode of growth does not represent bacteria’s natural growing style. In their habitat, bacteria grow in communities attached to a surface, forming a biofilm.

In our study, we have tested the efficacy of CAP toward biofilms of the bacterium Pseudomonas aeruginosa. This bacterium has been associated with disease in both humans and plants. It is commonly found in soil, water and man-made environments. P. aeruginosa has many antibiotic resistances, which makes it hard to eradicate with antibiotics. Susceptible people, especially those with a weakened immune system, can develop life-threatening infections from P. aeruginosa biofilms. 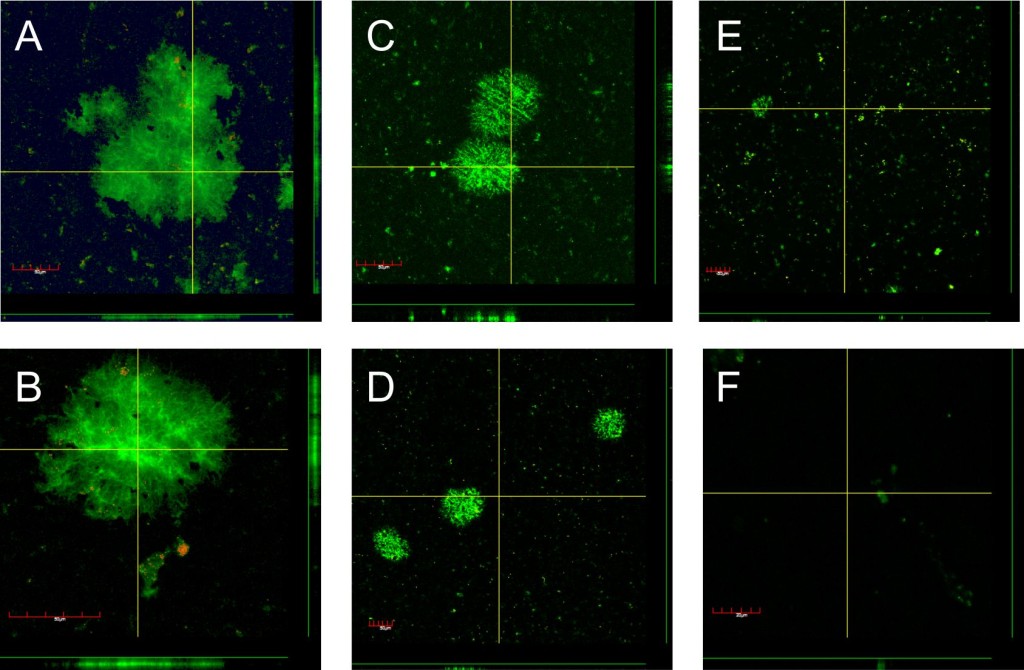 Fig. 2. Confocal microscope images of P. aeruginosa biofilms cells after argon plasma treatment stained with BacLight Live/Dead. Live cells are stained green and dead cells are stained red A) Untreated control, B) 10 min gas control, C) 1 min plasma, D) 3 min plasma, E) 5 min plasma and F) 10 min plasma treatment. Each image shows a representative horizontal section (main picture), and two vertical sections (to the right of and below the green lines on the right-hand side and bottom of the main picture, respectively). The vertical sections correspond to the two yellow lines in the main picture.

To investigate the resistance mechanism, the chosen colonies were subjected to whole genome sequencing. Several gene mutations, including in phenazine (a pigment produced by the bacteria) were identified. It remains to be investigated whether the surviving colonies had either a favourable natural mutation before the treatment or that plasma exposure induced such a mutation.

Our study demonstrates that CAP can be a valuable tool in combating bacterial biofilms. However, care must be taken, as low doses may lead to the emergence of resistant bacteria and the formation of persister cells.