The intake of simple sugars in the human diet has risen in the last decades, especially due to the elevated consumption of sugar-sweetened beverages. This increase in simple sugar consumption has been associated with metabolic pathologies, such as obesity and diabetes, and more recently it has also been related to cognitive alterations. However, it remains unclear whether these effects are related exclusively to increased energy intake, and the molecular mechanisms involved are not fully understood. 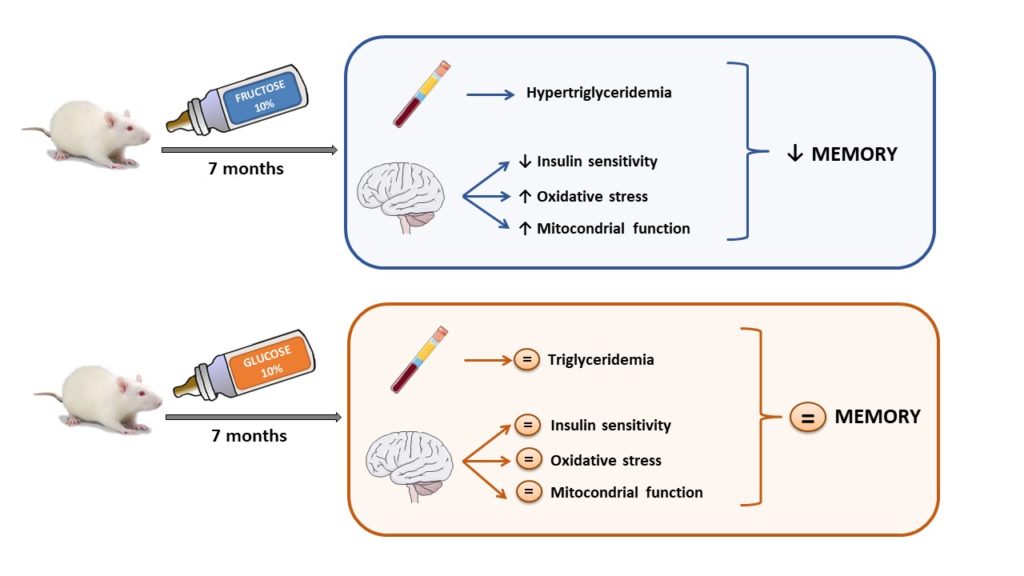 In this study, we examined whether long term supplementation with liquid glucose or fructose, providing the same amount of calories, causes not only metabolic but also cognitive alterations in female rats, and to explore the molecular mechanisms involved.

To this purpose, we supplemented female rats with 10% w/v fructose in drinking water or with isocaloric glucose solution for seven months. Once finished this period, we evaluated rats’ memory using the novel object recognition (NOR) and the Morris water maze (MWM) tests. The NOR test compares the time the animal spends exploring a novel object (an object that the animal has never seen before) with the time spent exploring a known object. When the rat spends more time exploring the novel object than the known one, it means it has a good memory. On the other hand, in the MWM test, the animal has to find a hidden platform submerged in a circular pool using four different cues located around the pool. The test is performed during several consecutive days. If the animal reduces the time needed to reach the platform over the days, the animal has a good learning capacity.

We also performed a glucose tolerance test (a test that determines the ability of the body to clear glucose from the blood) and measured different plasma parameters and protein and mRNA expression in the two main brain areas related to memory function: the frontal cortex and the hippocampus.

So, what we obtained?

Although the MWM test showed no differences between groups, rats supplemented with fructose, but not glucose, showed less memory than control animals in the NOR test. This difference in the performance in the NOR test between glucose- and fructose-supplemented rats was observed despite both groups of rats consumed the same amount of calories.

In addition, two parameters showing the damage produced by oxidative stress, advanced glycation end products (AGEs) and thiobarbituric acid reactive substance (TBARS), were higher only in fructose-supplemented rats compared to the control groups. Moreover, fructose supplementation reduced the expression of antioxidant enzymes and altered the amount of proteins involved in mitochondrial fusion/fission in the frontal cortex.

Finally, we found a significant correlation between memory impairment in the NOR test and triglyceride and insulin plasma levels as well as the expression of molecules related to oxidative stress and mitochondrial dynamics in the frontal cortex.

In conclusion, our study shows that high fructose consumption induced memory deficits in female rats, which are not exclusively due to increased caloric intake (since isocaloric glucose supplementation did not cause these alterations) and are related to hypertriglyceridemia, impaired insulin signaling, increased oxidative stress and altered mitochondrial dynamics, especially in the frontal cortex.