Can Radon radiation become a source of treatment for Rheumatoid Arthritis?

Rheumatoid arthritis (RA) is the most common type of autoimmune disease. It is triggered by a faulty immune system of the body. However, the real cause of the disease is not completely known. The disease affects the wrist and small joints of the hand, including the knuckles and the middle joints of the fingers and causes severe pain in the affected joints. RA is found to be more prevalent in females and particularly above the fourth decade of age. RA can be differentiated from other arthritis by stiffness of bones and joints which is most often worst especially in the morning. It may last one to two hours, or even the whole day.

While there is no treatment yet, the disease can be diagnosed by blood test for rheumatoid factor, a blood protein which is found in almost 80 percent of patients. X-rays can also be used to diagnose RA at early stages. In the past people had the belief that bathing in naturally occurring water in between rocky caves could relieve joint pain. Later, these ponds were found to be rich in Radon, which is a noble gas and also exposes public to ionizing radiation. 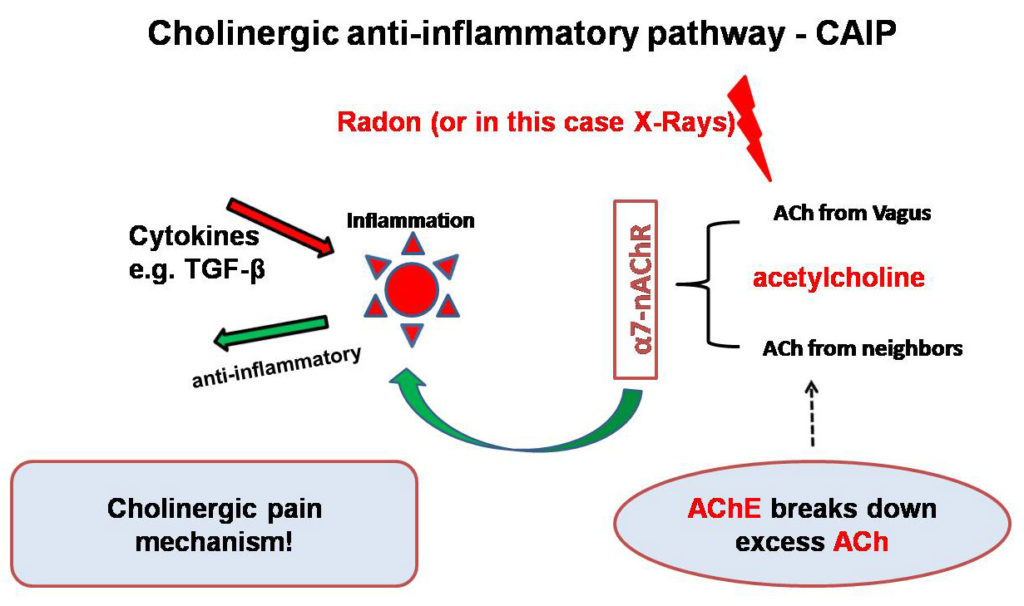 Fig. 1. Schematic action of cholinergic anti-inflammatory pathway (CAIP) in inflammation: Ionizing radiations either radon or X-rays might trigger the vagus nerve to produce ACh. Non-neuronal ACh acting via a7-nAChRs is considered to counteract inflammatory cytokines, like TNF-alpha, in order to balance inflammation and pain reactions.

Our idea was to utilize ionizing radiation as a source of therapy for RA. To be more precise, we used X-rays in the first step, but ultimately the aim is to go for radon treatment. Having not yet access to an experimental Radon chamber, we here used X-rays instead. Anyone would be aware of X-rays and its role in biomedicine. To facilitate the early studies, we needed a model system which could mimic the development of cartilage (chondrocytes) and bones (osteoblasts) in vitro. For this, we used limb buds from embryonic mouse which were 11 days old. The reason being that at this stage the limb buds are not completely differentiated, or, in other words still were developing and the mesenchymal cells from the buds can be manipulated to either develop into cartilage, or bones, or both by providing particular nutritional environments under 3D cell culture conditions.

After successful establishment of a model system for cartilage and bone, we induced a disease-like condition in the cells by treating them with TNF-alpha, a factor which plays a major role in progressing RA. The treatment clearly indicated disturbance in cartilage and bone, as documented by corresponding stainings (Alcian Blue for chondrocytes, and Alizarin Red for bone mineralization respectively). In envisaging future therapeutic possibilities, we exposed the diseased cultures to different doses of X-rays (0.5, 1 and 2 Gy). In vitro, low dose X-rays were not effective, but with 2 Gy a considerable reversion of TNF-alpha effects was observed, giving us the hope of using radiotherapy for RA.

The biological mechanism of action of X-Rays remains unknown. But during the course of study, we observed that the activity of the important enzyme acetylcholinesterase (AChE), whose normal function is to breakdown the neurotransmitter acetylcholine at the nerve junctions, was found to be affected after X-ray treatment. This provided an important link on the biological mechanism of action. Already scientific evidences are available on how the Vagus nerve, if activated, can stimulate the production of acetylcholine, which in turn activates its receptors and leads to a series of signal transductions, leading to anti-inflammatory responses. This pathway is called cholinergic anti-inflammatory (CAIP) pathway.

To prove the above hypothesis, we blocked the activity of AChE by specific chemicals in the culture system, and interestingly, the effects of TNF-alpha went down, proving that the cholinergic system might be involved in vital cross talking during signal transduction, thereby improving the anti-inflammatory responses, which however, need further research.