In the central nervous system (CNS) nerve regeneration is severely hampered making recovery from lesions such as spinal cord injury (SCI) extremely difficult and one of the most formidable challenges for regenerative medicine. So far, there are no effective treatments available to reverse the damage to spinal cord.

The very limited neuroregeneration seen after SCI is mainly hampered by the formation of a scar (the glial scar) containing different cellular debris (resulting from the immediate cell death arising from the primary injury) and inflammatory cells. This leads to the buildup of inhibitory molecules at the lesion site that not only blocks nerve regeneration but also contributes to further neural degeneration. Different inhibitory molecular pathways activated in the aftermath of an SCI are thus amenable to regulation to counteract their negative effects to regeneration.

Antisense oligonucleotides (ASO), represent one type of oligonucleotide therapeutics (or more broadly, RNA therapeutics) that can achieve, by eliciting RNA degradation, potent inhibition of different molecules or molecular pathways through specific silencing of gene expression. These are particularly attractive as drugs for CNS as they present a very specific and long-lasting activity with low toxicity.

A further approach in investigation is the application at the lesion site of biomaterials that can bridge the injury site providing not only a physical support but also a permissive environment towards axonal/nerve regeneration.

In our work, we have explored the combination of both approaches using fibrin, a natural human protein involved in blood clotting, to create a biomaterial-based hydrogel able to store ASOs which could then be applied locally at the injury site. To study this system, we have used two models: in vitro dorsal root ganglion explant cultures and an in vivo SCI model system where a hemisection of the rat spinal cord is made (the partial spinal cord injury allows to re-create an injury where some of the tissue was not affected and can still influence the outcomes of the recovery). The production of the fibrin-based hydrogel containing the ASOs is a simple process involving the sequential mixing of appropriate amounts of fibrinogen and oligonucleotides followed by the addition of a solution of thrombin, CaCl2 and aprotinin which initiates the gelification process.

We demonstrated that the ASOs were physically linked to the fibrin network that is formed after the gelification. This suggested that these gels could make for excellent local depots of the oligonucleotides for later local sustained delivery (Fig. 1). We went on to show in the in vivo rat SCI model, that this ASO-containing hydrogel could be applied specifically before gelation to better fill in the cavity formed by the lesion (the partial sectioned region of the spinal cord). Additionally, to further enhance the amount of AONs released at the injury site we used a pre-polymerized ASO-containing hydrogel that could be place directly on top of the pre-filled lesion.

With this hydrogel system we observed extensive release and diffusion of the oligonucleotides, not only at the lesion center but also extending some distance rostral and caudal to the lesion site. Most importantly, in our model system we could demonstrate potent antisense activity mediated by the released ASOs, achieving strong down-regulation of an endogenous target gene used as proof-of-concept (Fig. 2). 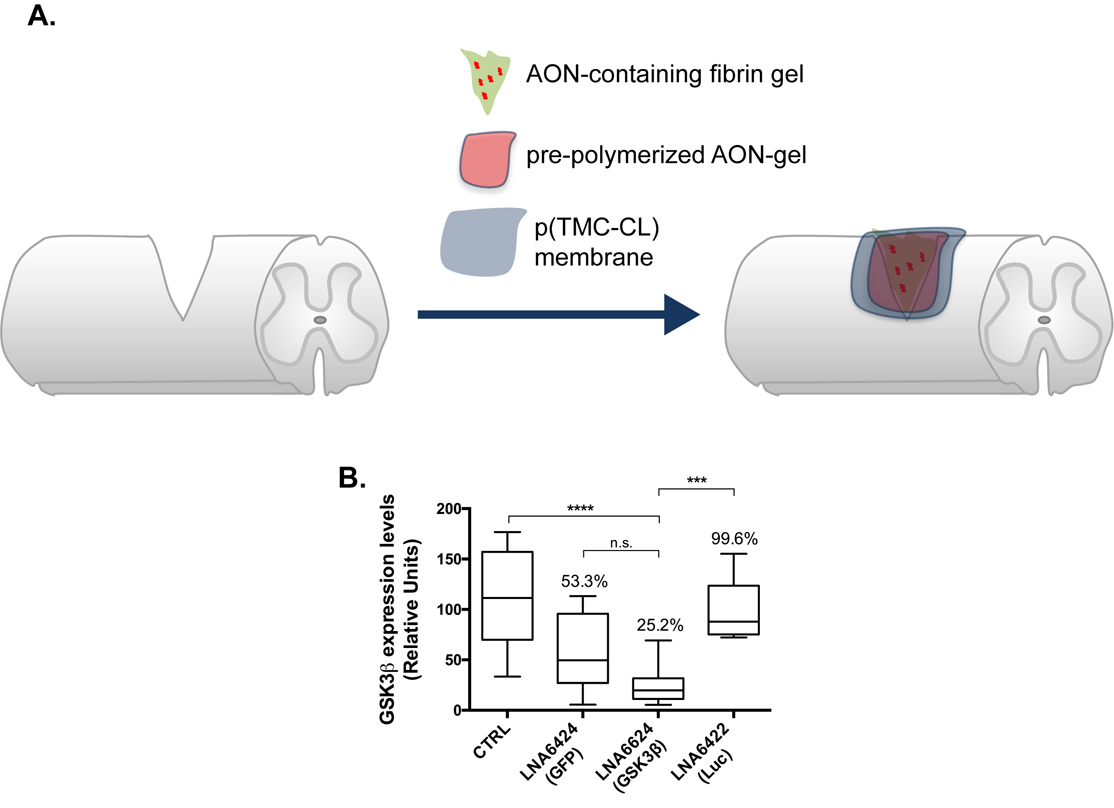 Finally, these results point to the potential of the proposed ASO loaded fibrin-based hydrogels to exert combinatorial pro-regenerative effects, where the biomaterial (hydrogel) provides a permissive scaffold for cell infiltration and axonal re-growth sustained by the modulation of cellular gene expression achieved by the ASOs intracellular action.