Can we select best sperm?

About 48.5 million couples worldwide have been unable to birth a child after five years or more, and have used assisted reproductive technologies (ART). Male infertility is a cause in 30-50% of these cases. Infertile men tend to have abnormal sperm characteristics, which could be a low sperm concentration, poor sperm movement, abnormal shape and size, and high levels of damage to the DNA. DNA damage is one of the more important characteristics because higher levels of damage are associated with lower pregnancy rates, early loss of pregnancy, and increased disease rates of offspring that are conceived through ART. ART are technologies that are used to help achieve pregnancy in cases of infertility, and only a third of these cycles result in pregnancy. Thus, it is important to develop methods to select the healthiest sperm for ART. 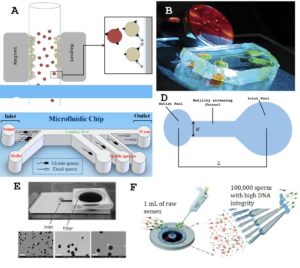 The most commonly used methods, or conventional methods, utilize a technique called centrifugation. This technique spins the sperm samples around really quickly, and at the end, the most motile sperm are used in ART. These methods are efficient at selecting motile and morphologically normal sperm, however, they are problematic because they tend to increase levels of certain chemicals that cause DNA damage. They are also less efficient at getting rid of sperm that are near death or selecting mature sperm.

There are now several newer methods that utilize other sperm characteristics to select the healthiest sperm for ART while minimizing centrifugation and thus reducing DNA damage. These methods have been shown to select sperm with less DNA damage and improved motility and morphology, but there are still some conflicts on whether these are significant improvements over the conventional techniques. Selection based on charge can select sperm with better overall health, but not enough data has been collected to assess its affects on pregnancy. Selecting sperm based on presentation of death markers also improves sperm quality, but is still reliant on conventional methods for the first step, and thus may damage DNA. Microfluidic devices (Fig. 1) have also been created to select sperm. These are devices that use small volumes of fluid and are created to mimic what happens naturally in the female genital tract. These devices show promising results in selecting high quality sperm, but they are still a relatively new technology and need to be assessed in a clinical setting.

Sperm separation techniques should be quick, easy, low-cost, and have the ability to select motile and morphologically normal sperm while decreasing damage done to sperm DNA. Since centrifugation tends to increase DNA damage, it should be avoided. Future studies should focus on creating sperm selection devices that can improve pregnancy outcomes and reduce birth defects.