Can women themselves assess the outcome of their abortion after an early medical abortion?

In many countries where abortion is legal, women face many barriers from seeking safe and legal abortion services. Most importantly, there is a shortage of abortion facilities and providers in rural areas. In the last few decades, providing abortion at primary care facilities has become more feasible since medical abortion can even be provided by providers not skilled to perform surgical abortion. However, traditionally, it required at least three clinic visits to get a medical abortion service. For women living in rural areas, who have limited transport facilities, it becomes difficult to repeatedly go to a clinic. In order to reduce the need for repeated visits for medical abortion, some studies have been done to assess whether women undergoing an early medical abortion can avoid going for a follow up visit, and can instead themselves assess the completion of their abortion through a urine pregnancy test. However, most of such studies were done in high-income countries or in tertiary hospitals of developing countries. We conducted a study to assess whether women residing in low resource settings can assess the outcome at home, after an early medical abortion, as compared to those who return to the clinic for a follow-up visit. 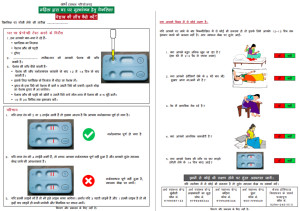 This study was conducted at 6 health centres in the state of Rajasthan in India. In Rajasthan, 70% population is rural and less than half the women are literate. Women seeking early medical abortion upto 9 weeks of pregnancy were randomly assigned either to routine clinic follow-up or to home-assessment. Women in the home-assessment group were advised to conduct a low-sensitivity pregnancy test at home, after 10-14 days of taking the first tablet of mifepristone, along with a pictorial instruction sheet (Fig. 1). The low sensitivity pregnancy test was used since the regular pregnancy test, which is highly sensitive, does not become negative for almost a month after abortion, while low sensitivity pregnancy test becomes negative at around 10 days after abortion. Women in the clinic follow-up group were asked to return to the clinic after 10-14 days where they underwent a check-up by a doctor or trained nurse-midwife. Women in the home assessment group were contacted after 12-15 days at their homes or on phone to inquire the result of their test and about other symptoms.

A total of 731 women were recruited in the study (353 in clinic follow-up group, 378 in home-assessment group). In the clinic follow-up group, 93% women had a complete abortion (absence of on-going pregnancy or incomplete abortion requiring additional surgical or medical treatment), whereas in the home-assessment group, 95% had complete abortion. There were no major adverse events in both the groups- only 0.3% women in each group had haemorrhage that required IV fluids or blood transfusion. Majority of women in home assessment group conducted their low sensitivity pregnancy test on their own without difficulty. The test was found to be quite accurate as a screening test to rule out on-going pregnancies.

Home-assessment using a low sensitivity pregnancy test is a feasible and effective method to identify women with on-going pregnancy after early medical abortion, even for women living in remote areas of developing countries. In areas where an additional visit to the clinic could deter women from seeking services from safe legal providers, reducing the need for a routine follow-up visit would increase women’s access to safe abortion services, save the time of the health staff, and will contribute to reduction in abortion related maternal mortality.