As any other organ of the human body, cancer needs a blood supply to provide oxygen and nutrients and to eliminate wastes.  Although already the ancient Greeks had realized that there is a close relationship between tumours and blood vessels, the nature of such a relationship has been debated for centuries. During the last forty years the prevalent view, based on the work of Judah Folkman, has been that a tumour can only growth if it is inducing production of new vessels. No cancer could become larger than a few millimeters, or no metastases could develop if new vessels were not produced, i.e. if there was “angiogenesis”. The induction of angiogenesis is considered to be so imperative for all the tumours that are currently included among the fundamental Hallmarks of Cancer. 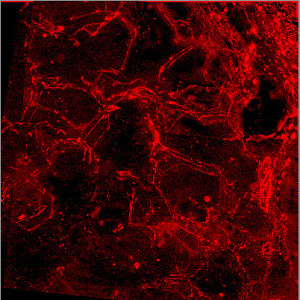 Fig. 1. Section of a normal lung. The vessels of the alveolar walls are shown in read and show the characteristic “chicken wire” appearance. The alveolar cavitie are containing air and are shown as black as they are empty.

This concept lead to the conclusion that drugs able to block the growth of new vessels could therefore “cure’ or at least “block” cancer. Such was the enthusiasm that in 1998 the Nobel Prize winner James Watson stated in an interview that   ‘Judah (Folkman) is going to cure cancer in two years’. While some benefits have indeed been achieved, these have occurred only in a subset of cancers and have been usually modest. More worrying, both in animal models and in human trials, advancement of tumours during anti-angiogenic treatment has been sometime observed.

In 1996 in my laboratory we observed that some advanced and aggressive cancers of the lung were growing without the formation of any new vessel whatsoever. A lung has very much the architecture of a sponge: it is full of very small cavities (the alveoli) and channels in which the air can go throughout. Within the thin walls delimitating the air spaces are the normal blood vessels, which collect the oxygen form the air.

What we saw therefore were some tumours made up just by the normal lung in which cancer cells filled the small cavities, the alveoli. The only blood vessels present were the one belonging to the normal lung. Since than many other laboratories have confirmed our results and discovered that cancer can grow without forming new vessels, but just exploiting the normal, existing one, also in many other organs, like brain and liver. 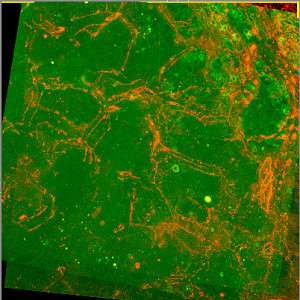 Fig. 2. A lung non-angiogenic cancer. As in Figure 1 the staining in red shows the same vessels seen in the normal lung, However the alveolar cavities are filled by cancer cells here stained in green.

What does this mean for patients diagnosed with cancer?

First that a drug which blocks the formation one vessels should be given only to patients with a truly angiogenic tumour but not in those with non-angiogenic cancers. A more personilised use of these drugs is likely to lead to better results.

Second that the tumours growing exploiting only the pre-existing vessels are, at least in some aspect, very different form the angiogenic once. Therefore, by studying how they work, we could identify new targets for treatment.

Third that the cancer cells in these tumours are able to recognize the normal vessels of the human body, stick to them and growth along them without destroying them. By studying how cancer cells achieve this we could, again, develop drugs that stop this phenomenon and could be very effective in these tumours therapy.

We cannot be as optimistic as James Watson was in 1998, however we think that some optimism is allowed as the more complete picture we are getting of the interaction between cancer cells and blood vessels is likely to deliver some improvement in treatment in the future by targeting both new vessels formation and the taking over of existing vessels.