Cannabinoid receptors and incidental associations: a way to creativity?

Animals and humans adapt to changes in the environment through previous experiences. In our daily life, while we are engaged in a particular activity or social event, we are continuously surrounded by random associations between low salience stimuli that might represent crucial learning processes determining our future choices. These incidental associations are gaining popularity in the neuroscience field as they might represent the most evolutionarily advanced way to increase the chances of predicting future events and adapting individuals’ behaviour. 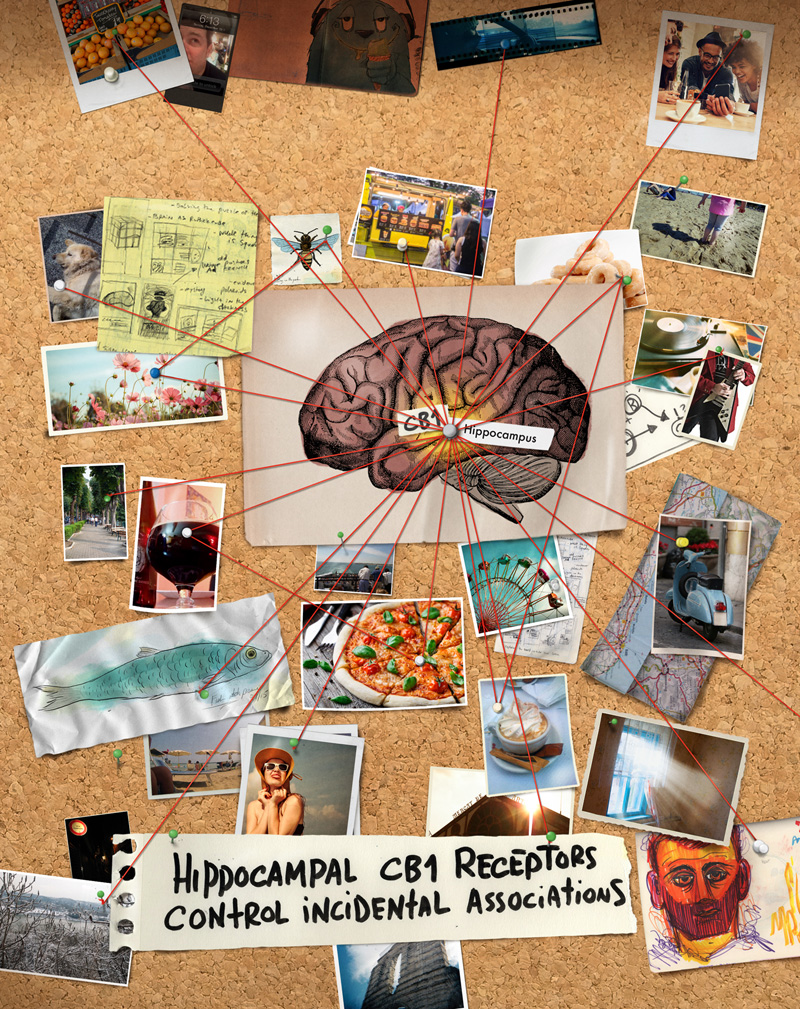 Fig. 1. TV crime bulletin boards with clues all pinned on connected by strings. Hippocampal CB1 is at the center and connected by strings to all sorts of random photos and newspaper clippings, allowing the brain to build links between some of them. This drawing represents the central role of hippocampal CB1 receptors in the formation of incidental associations between low-salience stimuli. Our original paper published in Neuron, (Busquets-Garcia et al., 2018) reports that cannabinoid CB1 receptor signaling in the hippocampus underlies the mammalian ability to associate randomly encountered stimuli, allowing future inferred memories and possibly explaining seemingly ungrounded responses toward certain cues. ©charlie padgett design.

Most of learning and memory studies in laboratory animals over the last decades focus on “direct” conditioning associations. In these settings, a conditioned stimulus with low-salience (i.e. with low intrinsic attractiveness or repulsiveness, such as a tone or a light) is paired with an unconditioned high-salience stimulus (e.g. with high attractiveness or repulsiveness, such as food or shocks). However, large part of learning processes involves incidental associations between low-salience stimuli, whose simultaneous (or sequential) occurrence is stored because of its potential value for future experiences. Interestingly, animals are also able to form these higher-order conditioning processes, but more research is needed to understand how the brain encode and store these complex cognitive processes. In this sense, our work published in Neuron (Busquets-Garcia et al. 2018) aims at further elucidating the mechanisms underlying how incidental associations are encoded in our brain.

Although this piece of work and other add new information into the field, higher-order conditioning processes must be further explored as they dictate human choices in normal and pathological conditions. For example, on one hand, incidental associations and their cognitive consequences can be the explanation of particular human abilities such as creativity, which is characterized by the ability to make connections between seemingly unrelated phenomena to generate solutions. On the other hand, the “Diagnostic and Statistical Manual of Mental Disorders V” (DSM V) defines delusions, a classical positive psychotic symptom, as “erroneous beliefs that usually involve a misinterpretation of perception or experiences”. This implies an erroneous mental representation of sensory stimuli, a characteristic that can be addressed in animal models using such higher-order conditioning tasks.