Microvascular damage is characterized by enlargement and distortion of capillary loops, micro-haemorrhages and progressive devascularization.

Peripheral microangiopathy can be recognized by nailfold videocapillaroscopy (NVC), a non invasive and safe method, that is well established in the investigation of patient’s with Raynaud’s phenomenon and SSc. 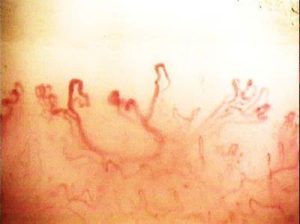 The ‘Late” SSc pattern (Fig. 1) is characterized by irregular enlargement of the capillaries, severe capillary loss with evident avascular areas, ramified or bushy capillaries and a severe disorganization of the normal capillary array, although giant capillaries and microhaemorrhages are almost absent.

The scleroderma patterns have been correlated with the different clinical manifestations of SSc, suggesting a possible relationship between capillary abnormalities, primarily the capillary number (CN), and the extent of visceral involvement. Aim of this study was to assess for the first time possible correlations between absolute  nailfold CN and organ involvement, in SSc patients with the “late” NVC pattern diagnosed at baseline and during a follow-up of five years.

In our study twenty-three patients (22 women, 1 male) affected by SSc according to the ACR/EULAR criteria, displaying the “Late” NVC pattern at baseline, were recruited and followed for 5 years. The most frequent type of SSc subset at baseline was the limited cutaneous form (lcSSc; 91%), while diffuse cutaneous SSc (dcSSc) was observed in 9% of cases. Esophageal manometry, pulmonary function tests with diffusing capacity of carbon monoxide (DLCO), chest x-ray, lung CT scan, electrocardiography (ECG),

Skin involvement was assessed by modified Rodnan skin score to classify SSc patients as affected by either lcSSc or dcSSc cutaneous SSc. NVC was performed to identify SSc patients with the “Late” pattern of microangiopathy, and to calculate the microangiopathy evolution score (MES). Absolute CN is calculated counting the capillary loops observable in the first (distal) row of the nailfold bed, along 1 mm per field, over 16 NVC fields (8 fingers, 2 fields per finger, fingers 2–5 of each hand).

Interestingly, the decrease of CN positively correlated over time with the worsening of FVC and DLCO values, and negatively correlated with the increase of renal arterial RI, renal and heart involvement, total DU number, PAPs values and MES.

No difference regarding the mean CN was noted between patients with anti-centromere and anti-Scl70 positivity.

The present study reports for the first time, in SSc patients in the context of the “late” NVC pattern of microangiopathy, an association between progressive decrease of absolute CN and organ involvement during a five year follow-up, despite the treatments. (Tab. 1) 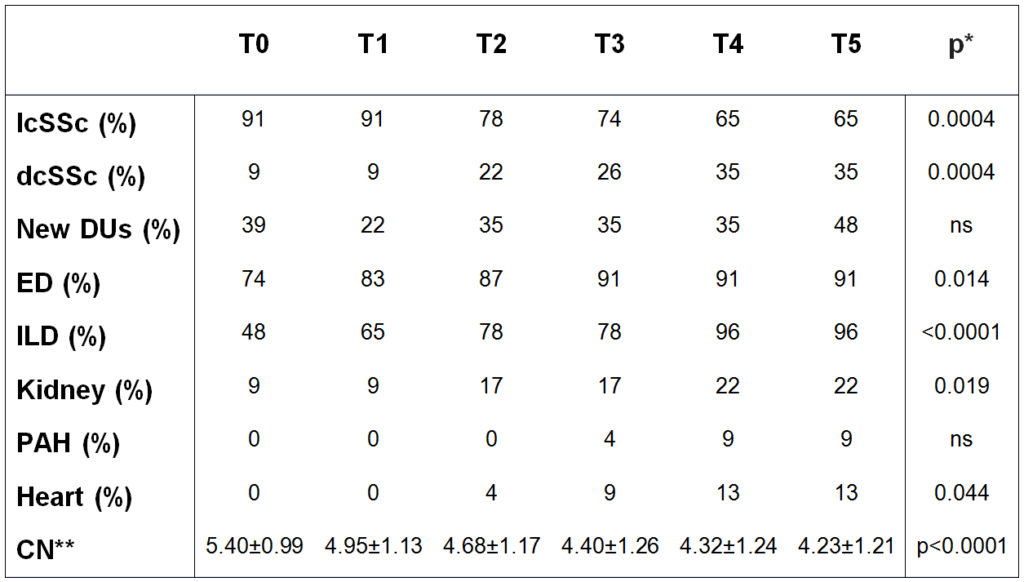 The results herein obtained underline how important might be the parameter “absolute number of capillaries” in order to better define the microvascular status.

The authors Smith V. et al have constructed a simple NVC scoring modality limited to the mean score of capillary loss that can be used as a clinical prognostic index for present and future digital trophic lesions.