Antibiotic resistance occurs when bacteria causing an infection survive after being exposed to a drug that, under normal conditions, would kill it or inhibit its growth. As a result, this surviving strains multiply and spread due to the lack of competition from other strains sensitive to the same drug. In 2017, the World Health Organization (WHO) published a list of antibiotic resistant bacteria against which there is an urgent need to develop new antibiotics. This list is divided into three categories depending on the urgency with which new antibiotics are needed: critical, high, and medium priority. Within the critical priority group are carbapenem and 3rd generation cephalosporin resistant Enterobacteriaceae. These bacteria are common pathogens causing severe infections such as pneumonia, complicated urinary tract, intra-abdominal and bloodstream infections. Thus, antibiotic resistance in Enterobacteriaceae has significant clinical and socioeconomic consequences. 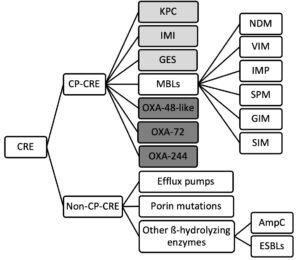 Initially, Enterobacteriaceae posed a threat to the public health due to their ability to produce extended-spectrum ß-lactamases. To fight this threat, the medical community turned to drugs such as carbapenems which, in turn, caused an even more serious problem, the emergence of carbapenem-resistant Enterobacteriaceae (CRE).

There are three major mechanisms by which these bacteria become resistant to carbapenems: enzyme production, efflux pumps and porin mutations. Of these, enzyme production is the main resistance mechanism. Gram-negative bacteria generally develop resistances through the production of ß-lactam-hydrolyzing enzymes. Thus, the enzyme that hydrolyzes the carbapenem ring is called a carbapenemase. Generally, CRE are divided into two main subgroups: carbapenemase-producing CRE (CP-CRE) and non-carbapenemase-producing CRE (non-CP-CRE) (Fig. 1). CP-CRE can produce a large variety of carbapenemases of which three are the most clinically relevant: Klebsiella pneumoniae carbapenemase (KPC), metallo-ß-lactamases (MBLs), and OXA-48-like carbapenemases. KPCs are the most prevalent and most widely spread worldwide. These enzymes are particularly dangerous because they produce multi-drug resistance to all the antibiotics within the ß-lactam family, which limits the therapeutic options to treat infections caused by these bacteria. Regarding MBLs, their clinical relevance comes from the fact that they have a high potential for horizontal transfer between bacteria, they lack clinically useful inhibitors, and they can counteract most ß-lactam antibiotics except for monobactams. Furthermore, MBL-producing isolates often express other enzymes, broadening their resistance profile. Lastly, OXA-48-like enzymes have an extraordinary ability to mutate and expand their activity spectrum.

Non-CP-CRE become resistant using mechanisms such as the production of other ß-lactamases, porin loss and efflux pump overexpression. These mechanisms aim to block the penetration of the antibiotic within the bacterial cell. These non-CP-CRE present a wider range of resistance because, while carbapenemases specifically target carbapenems and other ß-lactams, these mechanisms block different families of antibiotics.

The first case of CP-CRE was isolated in Japan in the 1980s. Since then, CRE have rapidly spread worldwide. Epidemiology studies suggest that different carbapenemases predominate in different areas of the world (Fig. 2). 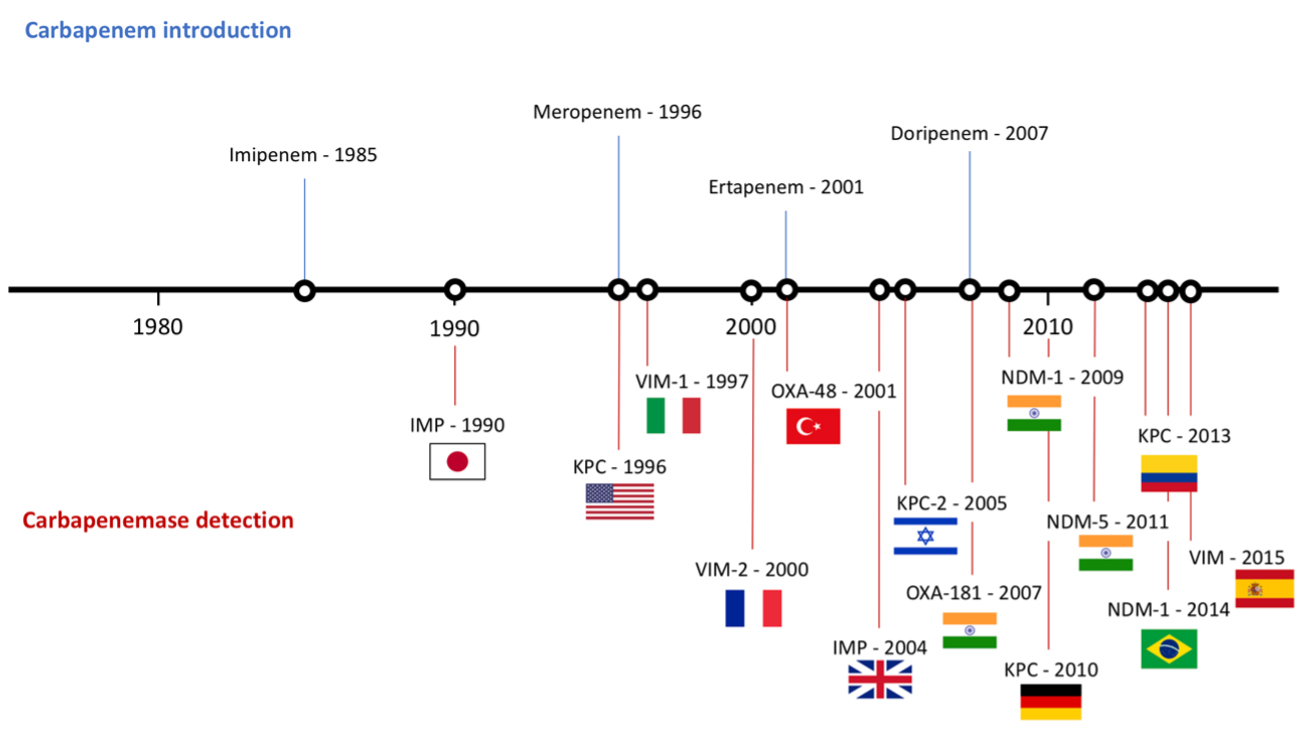 While carbapenems continue to be used for the treatment of infections caused by Enterobacteriaceae, CRE are an increasingly common issue in the clinical practice. Thus, different approaches to treat these infections are being used. These treatment options include the repurposing of already existing antibiotics, dual therapies with these antibiotics, and the development of new ß-lactamase inhibitors and antibiotics. Regarding existing antibiotics, certain “old antibiotics” are still effective against CRE. For example, fosfomycin, frequently used to treat urinary tract infections, continues to be effective against 80% of CRE. Other examples include aminoglycosides, colistin, polymyxins, and tigecycline. Regarding new drugs, ceftazidime/avibactam, meropenem/vaborbactam, plazomicin and eravacycline are the latest antibiotics approved to treat CRE infections. Furthermore, there are 6 molecules in developmental stages, imipenem/cilastatin and relebactam, cediferocol, SPR741, zidebactam, nacubactam and VNRX 5133.