The CCN family of proteins is composed of six members playing critical biological roles, both in normal and pathological conditions. The first three CCN proteins discovered were designated Cyr61, Ctgf, and Nov because of the context in which they were identified.

As they share important and unique structural features, but show distinct physiological properties, they have been grouped under the CCN acronym (using the first letter of each original name). Three more CCN proteins were discovered later. 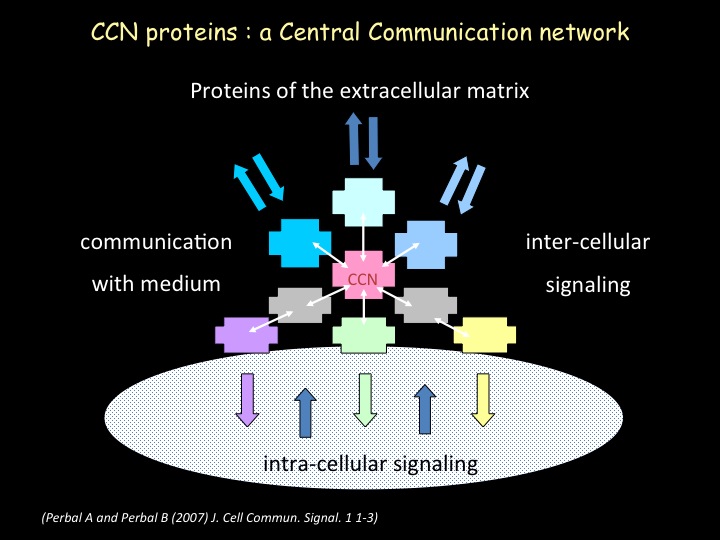 In the normal environment they regulate cellular cross-talk which governs the fate of living organisms, from birth to death. As such, they are involved in the regulation of cell –medium [matrix ?]1 and cell-cell communication.  They are secreted signaling proteins. Hence they have the capacity to act at distant sites (ectopically).

For a long time scientists focused their attention on intracellular signaling, i.e., the biochemical modifications, also called signal transduction, that occurs in response to a wide variety of external proteins and ligands such as hormones, cytokines, small peptides, and ions.  In the last few decades more attention has been directed towards signals that inform the cells about their environment. This is because cells need to be informed about the modifications to their immediate cellular and biochemical surrounding, to which they must adapt.

Signaling molecules such as CCN proteins deliver microenvironmental information both in a temporal and spatial way. As a result  signaling pathways are triggered that are part of a huge regulatory complex, necessary to achieve balanced development and maintenance of human life.  Signaling pathways must act in sequential and coordinated ways.  « Super-regulators » are required to allow coordination of complex regulatory pathways. CCN proteins are good candidates. 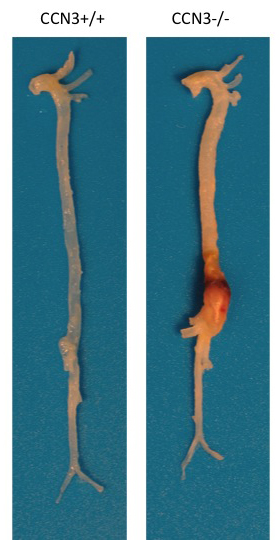 How can this be done? Indeed, CCN proteins are made of four parts, called modules, each interacting specifically with several proteins that have been identified as key regulators of basic biological functions.  We have proposed that the various combinations of regulatory factors binding to the four modules of each CCN protein dictate specific kinds of coordinated signaling to occur.  Since the CCN proteins are produced at different times of cell life, and at different locations in the body, the coordination provided by one combination of bound factors will only occur at specific times. Various regulatory factors are not expressed everywhere at any one time.  Therefore, the occurrence of various combinations will depend upon the presence of both bound factors and CCN proteins. The CCN acronym could therefore stand for Centralized Communication Network.

In other words, different coordinated signaling pathways rely on combinatorial events that depend upon spatial and temporal production of each particiapting molecule. We therefore expect CCN proteins to show a wide range of biological functions.  Indeed, expression of CCN proteins was shown to be essential in the biology of bones and cartilage, cardiovascular and nervous systems,  tissue remodeling and wound healing, blood cell differentiation, cellular proliferation and differentiation.

Ongoing studies have established that CCN proteins are potential tools for early detection and therapy of several pathological conditions.  Along this line, CCN3 has been recently shown to mitigate abdominal aortic aneurysm, a disease for which there is presently no treatment aside for surgery with all risks associated to this kind of procedure.

Aside from this kind of major scientific breakthrough,  other important medical applications based on the use of CCN proteins are sure to surface in the very near future.