Celiac disease (CD) is an autoimmune condition with a worldwide distribution that affects genetically predisposed subjects. It is classified as a permanent intolerance to gluten, and is prompted and maintained by gluten-containing products. The majority of CD patients (around 90%) have the HLA-DQ2 genetic marker, while a minority (around 5%) have the HLA-DQ8 marker. However, up to 40% of the general populations of North America and Europe, and people from South-East Asia also have these genetic markers yet they do not exhibit CD. 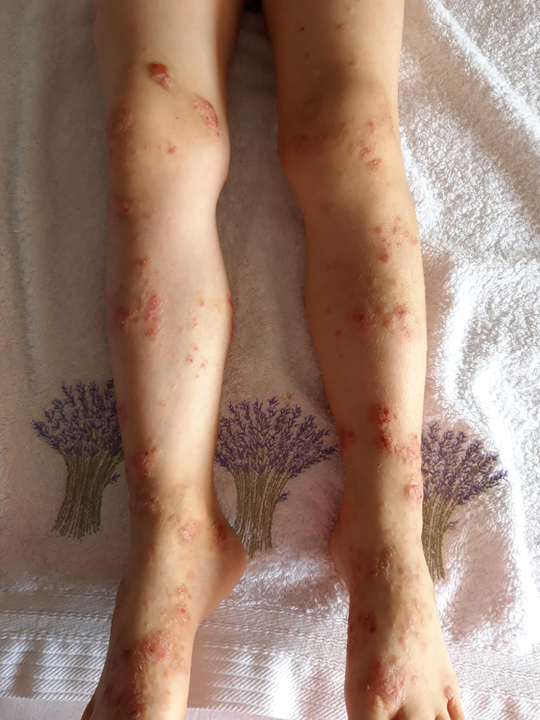 Fig. 1. Image of the anterior surface of both legs in a 6-year-old child, showing extensive Dermatitis Herpetiformis lesions in different stages of evolution.

The presence of inflammatory changes in duodenal biopsies, which range from lymphocytic enteritis, including Marsh stage 1 types, to various degrees of villous atrophy (Marsh stage 3), are the gold standard for CD diagnosis, even in the absence of positive serological findings. A life-long gluten-free diet (GFD) is the only effective treatment that can produce histological and clinical remission in most patients.

Cutaneous diseases are frequently associated with Celiac disease, and can be grouped into four categories based on their pathogenic characteristics with respect to their mechanism of production: autoimmune, allergic, inflammatory, or miscellaneous. This categorization was established by Humbert et al. in 2006.

The most common CD-associated skin disease is Dermatitis Herpetiformis (DH), which occurs in approximately 25% of cases of Celiac disease. It typically presents as a pruritic disease, which exhibits different forms of clinical affectation, starting as vesicular papules evolving from epidermal excoriations, to eczematous and crusty lesions leaving pigmented areas when it heals. Lesions at different stages of their evolution can coexist (Fig. 1).

DH is more common in males (children and adults), and predominantly affects caucasian people. A thorough review of this disease was recently published.

In some cases of Chronic Urticaria (CU), the adoption of a GFD has proved to be effective at controlling skin flares, suggesting that CU may be a cutaneous manifestation of CD, rather than a fortuitous association.

Atopic Dermatitis (AD) has also been linked to Celiac disease. Ress et al. compared the prevalence of CD in 351 children with AD with a pediatric population. They found that infants with AD had a four-fold greater risk of developing CD (OR=4.18; 95% CI, 1.12-15.64) compared with the general population.

Psoriasis is a chronic autoimmune inflammatory skin disease. The typical cutaneous signs are highly characteristic (Fig. 2). A three-fold greater risk of CD was found in patients with psoriasis compared patients not exhibiting this disease (OR=3.09; 95% CI, 1.92-4.97). The relatively frequent coincidence of CD and psoriasis justifies monitoring patients with either condition to establish any clinical evidence for the other.

Recurrent Aphthous Stomatitis (RAS) is a common clinical process that produces painful ulcerations in the oral cavity, including the tongue. RAS has been recognized for many years as being closely associated with CD. A recent meta-analysis confirmed that Celiac disease patients are more likely than those without the condition to have RAS (OR=3.79; 95% CI, 2.67-5.39), the odds being even higher when only children are considered (OR=4.31; 95% CI, 3.03-6.13). 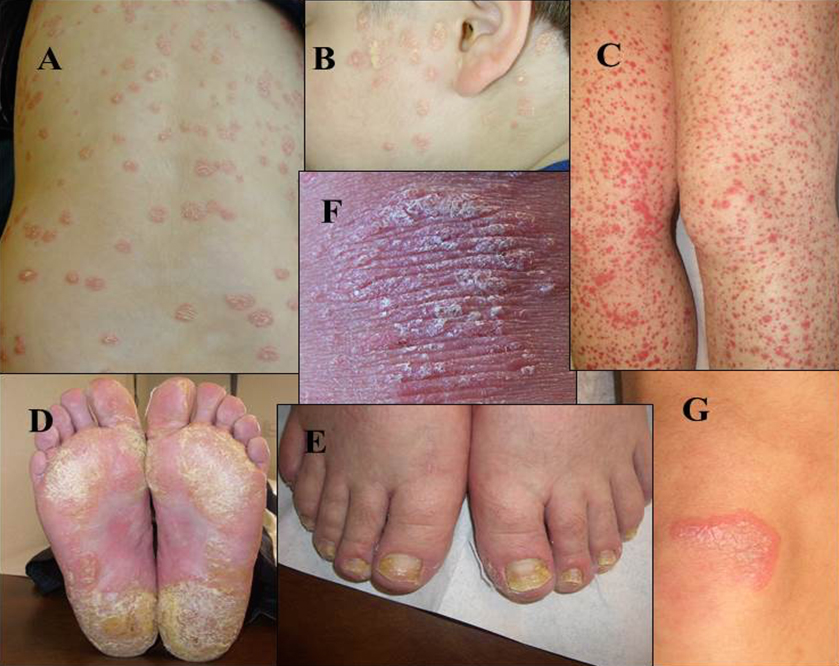 The relatively frequent coexistence of CD, can be applied to the other related skin diseases, and justifies the routine monitoring of patients with all of these cutaneous conditions, in order to gather any clinical evidence of CD, even in the absence of the typical gastrointestinal symptoms with gluten intolerance. In the presence of these associated skin diseases, it is advisable to perform the entire protocol for the active search of CD, including taking several duodenal biopsies too. In cases with negative findings for CD, a trial implementation of a gluten-free-diet (GFD) for at least 6 months, would be of great help in confirming or ruling out, the common association in all these patients.