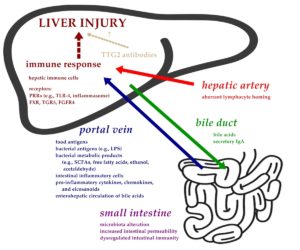 The liver, traditionally viewed as the central organ engaged in metabolism, nutrient storage, and detoxification, is also an immune organ, having an important regulatory role in innate and adaptive immunity. From an immunological point of view, the liver is exposed to large numbers of foreign molecules coming from the gastrointestinal tract via the portal vein. These non-self-antigens are derived from food (including gluten peptides derived from wheat and related cereals), and from the intestinal microbiota (i.e., bacterial components and products) that have breached the intestinal barrier. The liver must tolerate these gut-derived molecules, while still providing immunosurveillance for pathogenic infections and malignant cells. The liver sinusoids and the sub-endothelial compartment (the space of Disse) are populated with various resident immune cells (of the innate and adaptive immune system) capable of dynamic interaction, antigen sensing, phagocytosis, antigen presentation, cytokine and chemokine production, cytotoxicity, T cells programing, and communication with circulating immune cells passing through the liver. The diversity of immune interplay determines the balance between tolerance, protective immunity (against infection, tissue damage, or metastases), and autoimmunity in the liver. Constituents in portal blood circulating from the intestines to the liver, such as food antigens (including gluten), bacterial antigens and products, can under specific conditions trigger the hepatic immune response, which is connected to liver inflammation and fibrosis.

The relationship between celiac disease and liver disorders is common, and have been clinically evident for more than 40 years. However, its pathophysiology is far from being fully understood with many explanations being hypothetical. The putative pathogenetic mechanisms of liver injury in celiac disease include disturbances in the gut-liver axis, impaired intestinal barrier function, changes in the microbiota composition, circulation of tissue transglutaminase antibodies, and vitamin D deficiency (Fig. 1). Moreover, a shared genetic predisposition to autoimmunity also plays a role in relationship between celiac disease and associated autoimmune liver diseases.

Patients with autoimmune liver diseases associated with celiac disease can also benefit from a gluten-free diet. Early recognition and treatment of celiac disease with a gluten-free diet in patients affected by associated autoimmune liver disorders can prevent celiac complications and may, in addition to specific hepatology treatment, contribute to the alleviation of hepatic injury.

Screening for celiac disease should be integrated into the diagnostic routine not only in patients with unexplained elevation of liver transaminases, but also in patients with above mentioned associated autoimmune liver diseases, with chronic hepatitis or cirrhosis of unknown origin, and with non-alcoholic fatty liver disease presenting without context of metabolic syndrome (i.e., without obesity or type 2 diabetes mellitus).