Cell division is essential to morphogenesis, tissue spreading, and tumor invasion. In particular, the hallmark of tumor invasion is the ability of cancerous cells to divide in extreme numbers. Our findings on the effect of cell division provide new insight into how division-induced flows influence coordinated migration of cells.

Fig. 1. Generation of a dipole-­‐like flow field due to a cell division event modelled as a local increase in concentration (left) and experimental measurements of the flow field around a dividing cell (right).

Vital physiological processes are driven by collective motion of groups of migrating cells. Movement of many cells within a tissue, typically involving tens to hundreds of thousand cells, leads to swarming and the formation of large-scale rotating flows. Such dynamics cannot be explained by considering the motion of individual cells. Instead, the whole assembly must be treated as an exotic type of matter – active matter – where the continuous energy input from cellular processes drives the tissue far out of equilibrium. To characterise the impact of cell division on collective motion in cellular monolayers, we have introduced the notion of cell division-induced activity. Our work shows that the cell division can itself act as an energy source, driving coordinated motion in a tissue. 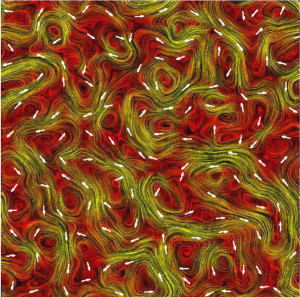 Fig. 2. The emergence of collective cell motion due to the cell-­‐division. The colour maps indicate the magnitude of the velocity and white arrows the local direction of the velocity

We verify our theory through direct experimental measurements of the flow produced by dividing Madine Darby Kidney (MDCK) cells. Averaging over many division events, experiments confirm that the cell division generates rotating flows around dividing cells as predicted by our model. In addition, the emergence of collective cell migration in a growing band of dividing cells is shown both in experiments and theory.