Cells must communicate to maintain normal uterine and placental functions

Cell-cell communication through specialized channels known as gap junctions (Fig. 1) regulate cellular metabolism and coordinate cellular functions during growth and differentiation of organs and tissues. Gap junctions are composed of six proteins known as connexins (Cx) that create intercellular channels that allow ions and small molecules to pass freely between cells. Gap junctions are present in all organs in mammalian species. 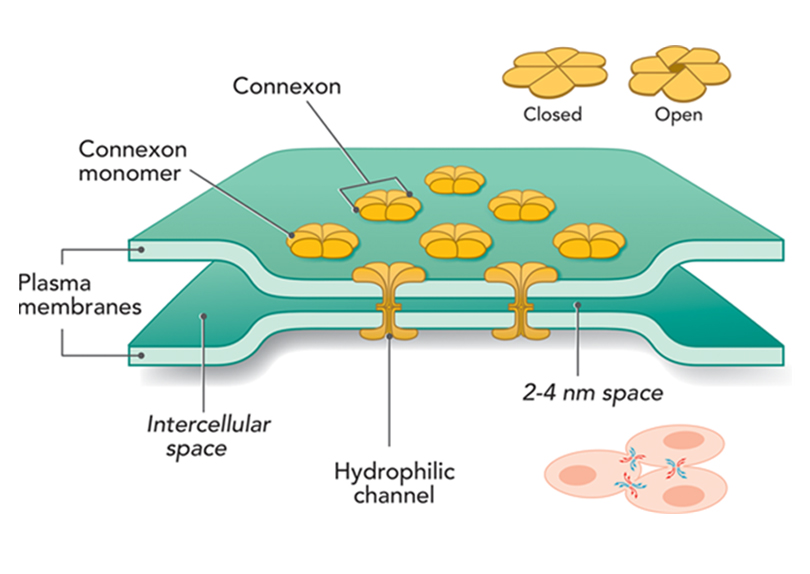 In rats, mice, and humans, Cx messenger RNA (mRNA) and proteins have been detected in uterine and placental tissues and shown to be influenced by hormones such as estrogens and progesterone. The ovine placenta is different from these species and we know less about Cx expression in uterine and placental tissues in sheep. We hypothesized that the mRNA for four major Cx (Cx26, Cx32, Cx37 and Cx43, named by their weight/size) is present in the uterus and placenta of sheep. Thus, we designed three experiments to begin to understand where and how these Cx were expressed and what role they might play in the problems with embryo losses that occur during early pregnancy and in pregnancies using assisted reproductive techniques (ART).

Uterine and/or maternal and fetal placental tissues were collected: 1) from ovariectomized ewes at 0 (controls) through 24 hours after treatment with estradiol-17 beta (E2) implants (Experiment 1); 2) on days 14 through 30 of early pregnancy from naturally (NAT) bred ewes (Experiment 2); and 3) on day 22 of early pregnancy established after transfer of embryos (i) from hormonally treated and naturally bred ewes (NAT-ET), or created through in vitro (ii) fertilization (IVF; with maternal and fraternal genes) or (iii) activation (IVA, with only maternal genes; Experiment 3). RNA was extracted from snap-frozen tissues and assayed using real time quantitative reverse transcriptase polymerase chain reaction technology.

Most embryonic loss occurs during early pregnancy and these losses may be compounded when ART methods for treatment of infertility are used. Our results have shown that Cx26, Cx32, Cx37 and Cx43 are expressed in uterine and placental tissues of sheep in a time-specific, hormonally responsive manner and are influenced by embryo origin. Since expression of Cx26 and Cx43 was strongly affected by E2, these Cx may be the major regulators of uterine and placental functions in sheep. Increased expression of Cx37 and Cx43 in the fetal portion of the placenta suggests that these Cx are involved in the regulation and promotion of blood vessel growth that occurs in this tissue.

Thus, in future studies, we may be able to determine the specific roles Cx play in maintaining the placenta and preventing embryonic loss. We must localize Cx proteins to specific cells using immunohistochemistry, and examine the effects of growth factors and hormones on Cx expression in selected cell types from uteri and placenta. Knowledge derived from these studies may contribute to development of therapeutic strategies to treat impaired uterine functions, particularly those resulting from ART application.