Finding a needle in the haystack is not that difficult after all: Just use a strong magnet, and you have a good chance to get it. Picking up, among millions of different compounds, the right ones that will in the end lead to a drug that will be sold on the market is more challenging. Scientists have developed many different approaches to separate the wheat from the chaff, that is to weed out compounds with unfavorable properties and to select those that are most likely to be tolerable and efficient in patients. An important class of such screening steps from the drug hunter’s toolbox are so-called cell-based assays, in which test compounds are applied to cells that in some way replicate aspects of the disease to be treated. Sometimes, establishing such assays with a satisfactory sensitivity (i.e. that do not miss too many compounds with desirable properties) and selectivity (i.e. not selecting too many false-positives) can be a true challenge, and in many instances may delay the advancement of a compound to the next stage of additional testing. 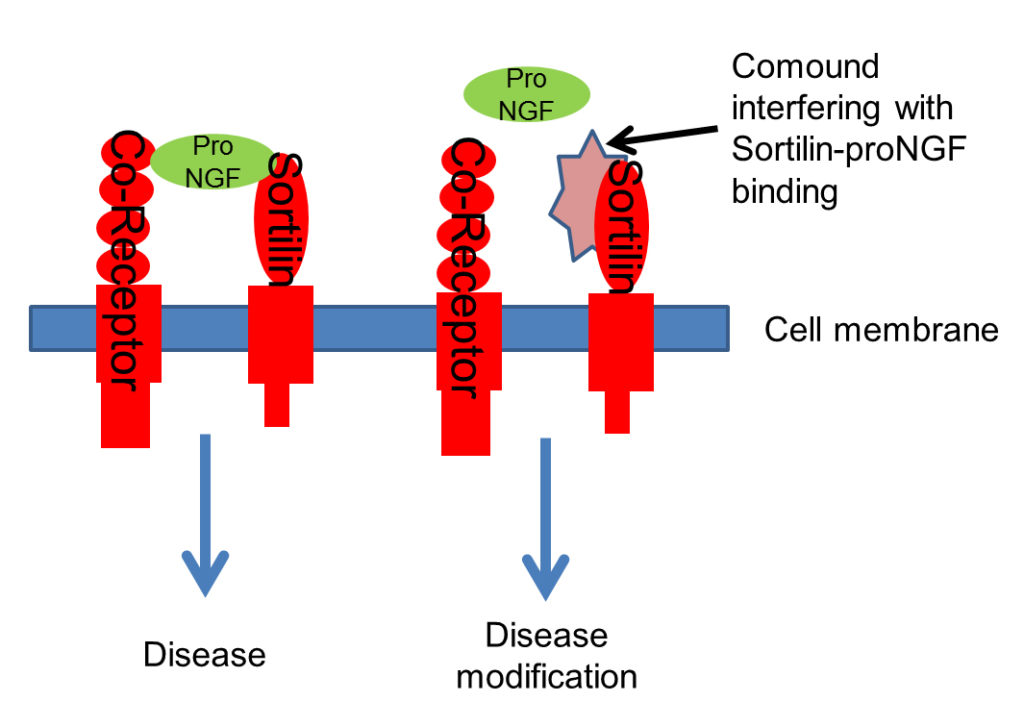 Fig. 1. When a pro-Form of nerve growth factor (NGF, or other pro-growth factors) binds to Sortilin and an additional receptor, a cascade of signaling events in the central nervous system might in some cases be triggered that can lead to diseases, such as Alzheimer‘s, Parkinson‘s, chronic pain, and others. Thus, it may be advantageous to develop drugs that specifically bind Sortilin (brown structure), thus blocking access of proNGF to the site that could otherwise interact with Sortilin and its coreceptor.

In a recently published paper by Malik et al.(Malik et al., 2018), we describe a method for a cell based assay to support developing compounds interfering with the binding of the so-called receptor sortilin to a part of a protein called nerve growth factor (NGF). The binding of Sortilin to a “pro-form” of NGF is thought to be involved in serious diseases, such as Alzheimer’s and Parkinson’s disease, seizure, retinal ischemia, and pain signaling (Fig. 1). It is thus thought that interrupting Sortilin-proNGF interaction using a drug could be beneficial for many different patients. Like in any drug discovery program, it is critical to select and modify promising compound candidates in a way that they have a high affinity for their target interaction site. Ideally, the drug would fit into the interaction site like a high-security key into its lock. That key, however, should ideally not fit into any other lock. In other words, the drug should not bind to other proteins, to avoid unwanted effects on those. So-called “off-target effects” could otherwise cause unwanted side effects in the patient.

To that end, Malik et al reprogrammed cells in a culture dish to highly express the Sortilin receptor, by introducing copies of Sortilin DNA (Fig. 2). The cells were then plated in a dish with 96 wells, so that on one plate, many different conditions could be tested. Next, the test compounds were added, together with the NGF pro domain. Then, Sortilin is labeled with a red fluorescent dye, and the NGF pro domain is labeled with a green fluorescent dye. Next, microscopic images are collected automatically using a robot. An automatic image analysis algorithm determines the intensity of fluorescence present only in those cells that also express Sortilin. Little proNGF staining on Sortilin-positive cells means that the test compound interfered with Sortilin-proNGF binding, i.e. that the drug might be promising. Next, different concentrations of promising compound candidates are tested, allowing to quantify the affinity of the compound for the receptor. With some additional adjustment to the assay, thousands of compounds could be tested within weeks. It is not only useful to assay promising structures, but also to test whether efforts to further optimize drug leads by modifying them is moving into the right direction, i.e. improving their affinity for the Sortilin-proNGF interaction site.

Establishing  a cell-based assay solves one importang step in the long and arduous process of developing a compound into a drug that can in the end successfully treat patients. The methodology described in the paper could be modified to be applicable to other drug discovery projects as well.

Development of a Cell-Based Assay to Assess Binding of the proNGF Prodomain to Sortilin.
Malik I, Christensen S, Stavenhagen JB, Dietz GPH
Cell Mol Neurobiol. 2018 May