Gonad development requires the integration of multiple cell types of various origins. Testis development in particular depends on the crucial step of vascular endothelial cell migration from the mesonephros (the embryonic kidney) into the neighboring gonad tissue. This is a sex-specific morphological event that patterns the testis and allows the formation of seminiferous tubules. The textbook chapter “Mesonephric Cell Migration into the Gonads and Vascularization Are Processes Crucial for Testis Development” within the book Molecular Mechanisms of Cell Differentiation in Gonad Development provides a detailed look at how and why this endothelial migration event is so essential. It also covers evidence for the migration of other non-vascular cells of mesonephric origin such as peritubular myoid cells or other interstitial cells. 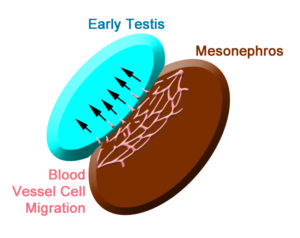 The reader is offered 1) a comprehensive assessment of the timing of migratory events, 2) a comparison with ovarian development, 3) a historical context for the research that led to these discoveries, 4) an in-depth overview of the signaling molecules involved (especially the pathways related to Vascular Endothelial Growth Factor), 5) a description of the cellular mechanisms of migration, and 6) a discussion of the reintegration of the vascular cells into their target tissue and their ultimate role in the testis.

The timing of migratory events presented utilizes the mouse and rat developmental timelines, as these are the species in which much of the research regarding male mesonephric-gonad migration has been performed. The events take place over a matter of hours in the rodent, and the described migratory and morphogenetic processes can also overlap/occur simultaneously. A brief description of events taking place in the female gonad during the corresponding timeline is also included.

The series of research studies from initial histological evidence to directly tracing labeled migratory cells is presented, along with a discussion of how the cellular identity of the majority of the migrating was determined. Next is offered an in-depth look at a variety of signaling pathways and factors that affect the mesonephric migration event. A table summarizing each of the relevant genes, their function, the site and timing of expression, and the effects of mutation or inhibition of the genes is included for easy reference. The factors/signaling pathways reviewed include the following: SRY, SOX9, SF1, FGF9, WNT4, CITED2, RSPO1, VEGFA, PDGF, neurotrophins, AMH, and DHH.

Additionally, the final sections of the chapter delve into what is known about the cell behaviors that drive the mesonephric cellular migration and the role of the migratory cells once they re-integrate into the testis. Cellular migration requires reorganization of the cytoskeleton and cellular adhesions as well as directional cues. An interesting aspect of the vascular cell migration is that the cells follow specific tracts through an as-yet-unknown mechanism. And, during and after the vascular cell migration event, there is communication between the migratory cells and the somatic cells of the testis and even tissues beyond the testis.