For decades, researchers have attempted to construct artificial cell – like systems using biomolecules such as DNA, RNA, proteins, and lipids. Artificial cell – like systems are microcapsules constructed from giant liposomes or water-in-oil (W/O) microdroplets that encapsulate biological machinery and biochemical reaction systems (Fig. 1). The principal obstacles to the synthesis of artificial cell-like systems are the size control of the microcapsules, their generation throughput, and the encapsulation efficiency of biomolecules in the microcapsules. Microfluidic generation strategies must address these challenges; however, the use of microchannels is hampered by complicated microfabrication processes, difficulties with the precise control of the liquid flow in the microchannels using syringe pumps, and the requirement for addition of large amounts of sample solutions into the syringe pumps. Thus, simplified methods for the generation of monodisperse liposomes and W/O microdroplets have been needed.

Fig. 1. Schematic illustration of artificial cell-like systems based on liposomes (left) and water-in-oil (W/O) droplets (right).

Recently, centrifugal capillary-based microfluidic methods for construction of micrometer-sized liposomes and W/O droplets with uniform sizes were developed. The methods do not require complicated microfabrication processes because the device for those methods is constructed from a glass capillary, a polyacetal holder for the glass capillary, and a microtube. Here, two methods are introduced (Fig. 2): a) droplet-shooting and size-filtration (DSSF) method; b) centrifuge-based axisymmetric co-flowing microfluidic method.

The DSSF method can create micrometer-sized liposomes (5–20 μm in diameter; Fig. 2a). The DSSF method is based on two physical phenomena: (i) small and large water droplets are discharged from the tip of a glass capillary into an oil phase by a centrifugal force, resulting in the formation of W/O droplets; (ii) the small W/O droplets are spontaneously selected by kinetic size-filtration in droplet transfer through an oil-water interface, and the transferred small W/O droplets form liposomes. 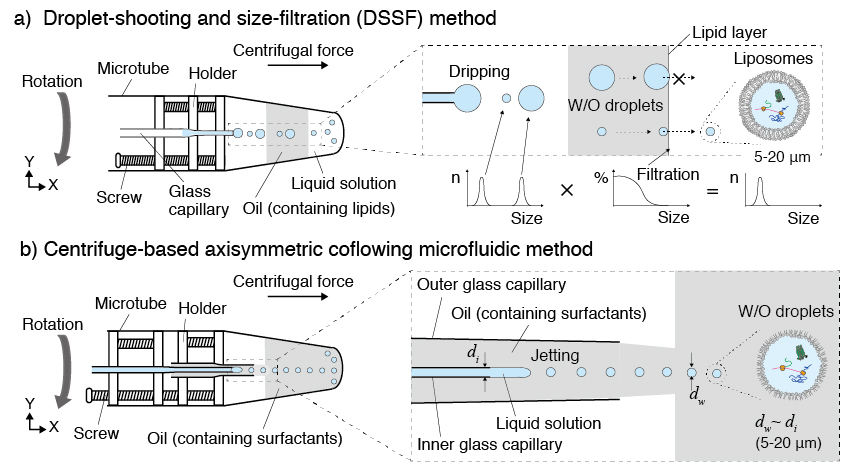 The centrifuge-based axisymmetric coflowing microfluidic method, another type of centrifugal capillary-based microfluidic device, generates monodisperse W/O droplets measuring between 5 μm and 20 μm in diameter (Fig. 2b). This device is composed of two types of round capillaries (inner and outer capillaries), a capillary holder, and a microtube. In this method, W/O droplets are generated by droplet breaking via the Plateau-Rayleigh instability of a jetting flow.

Both these methods have the ability to generate hundreds of liposomes or W/O droplets with a uniform size from just small volume of sample solutions (~0.1–1 μL) including gene-encoded DNA and a cell-free protein expression system. Additionally, proteins can be successfully produced inside liposomes and W/O microdroplets. Thus, these methods will help researchers study the biochemical reactions in artificial cell-like systems, and could facilitate the constitution of the models of living systems from the bottom-up for a variety of research purposes.