The chronic inflammatory disease lupus can involve the brain, including increasing stroke risk for reasons which are not fully understood. Cerebral small vessel disease (SVD) is a disease of the blood vessels in the brain that can lead to stroke. We were interested in whether patients with lupus had features of SVD on brain imaging, as a way of helping us to understand how the brain might be affected in lupus. The known features of SVD on brain images include white matter hyperintensities (WMH) and visible perivascular spaces (PVS). Our aims were to measure and compare imaging biomarkers of SVD in patients with lupus with healthy controls that did not have lupus, and patients with minor stroke. 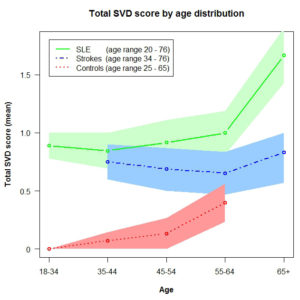 This was a brain magnetic resonance imaging (MRI) study that recruited patients with lupus between April and December 2014. The lupus clinic reviews all patients diagnosed with lupus in one health region from the point of diagnosis onwards. We recruited as consecutively as possible and patients represented a wide range of lupus, being of varying disease durations and severities. All patients were seen by a consultant rheumatologist. The project received research ethics committee approval (14/SS/0003) and all participants gave written informed consent.

Medical histories including smoking status, high blood pressure and diabetes were recorded. Blood was taken to measure various molecules, including the level of inflammation. Lupus disease activity was assessed by an experienced rheumatology nurse specialising in lupus who interviewed each patient and had access to all medical data and blood results. We used routine tools to assess cognitive abilities as well as anxiety and depression as these can be affected in lupus. All patients and controls had an MRI scan of the brain.

All MRI scans were reviewed by a consultant. WMH and PVS were assessed and quantified. The amount of brain tissue was calculated. A total SVD score from 0–4 was calculated from the MRI scans. 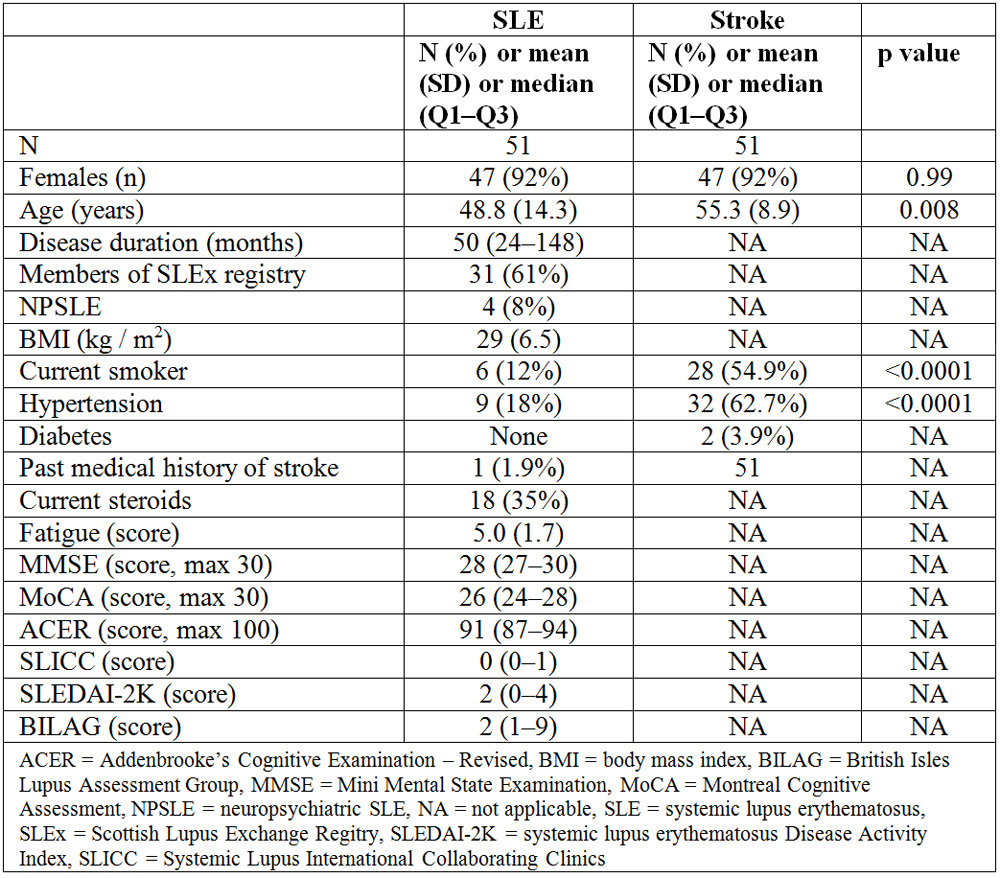 We contacted 55 patients with lupus and 51 agreed to take part. There were 47 women and 4 men and the average age was 49 years old (the youngest was 20 years, the oldest 76 years). Clinical data are given in Table 1. Healthy controls were of similar age while the stroke patients were on average six years older than the lupus patients. There were more smokers and patients with high blood pressure in the stroke group.

An analysis of the brain scans showed the lupus group had more brain imaging evidence of SVD compared with healthy controls. We also compared the group of lupus patients with a group of patients that had already suffered a minor stroke. In this comparison we found similar levels of SVD generally between the groups and even more of some SVD features in the lupus group. We concluded a larger study was needed to confirm our findings.