Traumatic brain injury (TBI) is currently one of the most serious public-health problems, with an annual global incidence rate of 319/100,000. TBI includes primary injuries directly caused by mechanical stress and shear forces, as well as secondary injuries such as post-traumatic hematoma, cerebral edema, and brain swelling. It has been reported that monitoring of intracranial pressure (ICP) and cerebral blood flow (CBF) in the clinical management of patients with TBI can help reduce patient mortality and improve outcomes. In practice, the cerebral perfusion pressure is calculated from the difference between mean arterial pressure and ICP, which indirectly reflects the intracranial blood supply. However, this method has certain drawbacks, such as the influence and effect of cerebral venous hemodynamics on secondary brain injury outcome/progression being neglected. Monroe-Kellie’s theory states that ICP is regulated by brain tissue, cerebrospinal fluid, and intracranial blood, the balance of blood flux in and out of the brain is essential for maintaining ICP. Therefore, the restricted cerebral venous return may affect secondary injury and cause disease progression in patients with TBI. 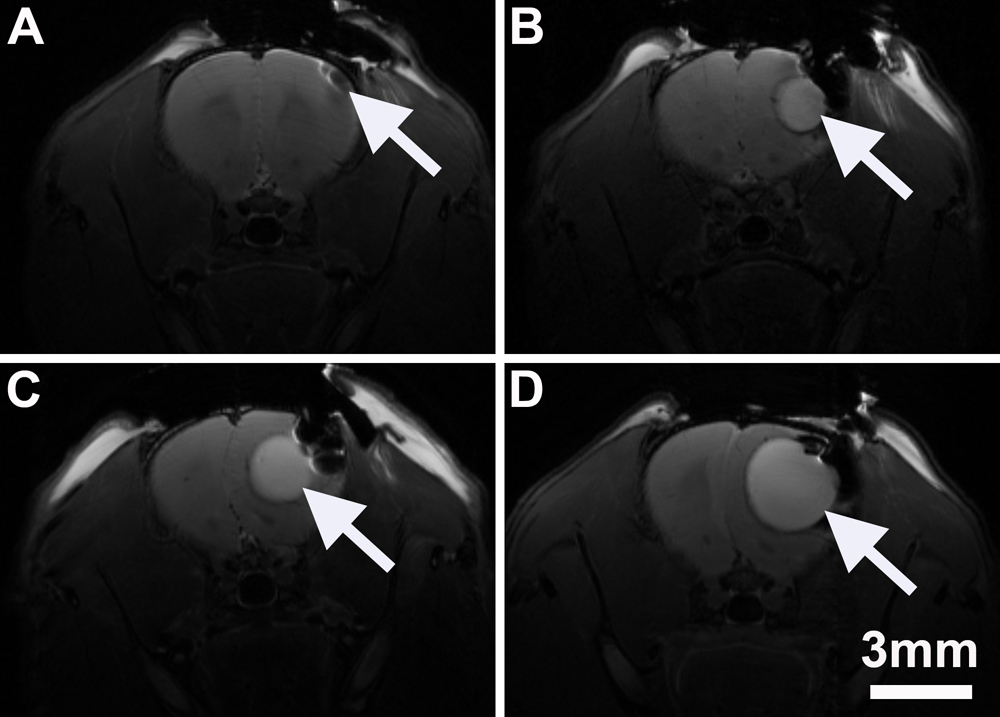 In our study, an acute epidural hematoma (AEDH) model was developed by placing a controllable micro balloon in the right epidural space of a rat to simulate a condition of secondary injury. The laser speckle contrast imaging (LSCI) system was used to observe CBF in real time, while ICP was monitored simultaneously. And the stability of this model was examined by magnetic resonance imaging (MRI). The MRI showed the brain tissue was not deformed under pressure in the sham group (Fig. 1A). But as the volume of the micro balloons increased, the degree of deformation of the right frontal lobe and the degree of left-lateral deviation of the brain line gradually increased (Fig. 1B–D). The LSCI system was used to perform real-time and wide-area observation of CBF, and the ICP value was recorded simultaneously. The results showed that, as the micro balloon volume increased, the blood flow and diameter of the SSS decreased (Fig. 2). Considering the change in diameter, blood perfusion rate (BPR) was introduced: BPR = V×π×D2/4 (V: blood-flow velocity; D: vessel diameter). Spearson correlation analysis of BPR of superior sagittal sinus (SSS) showed a significantly negative correlation between BPR and ICP (r = −0.818, P < 0.001; Fig. 2I). In addition, the ipsilateral cerebral venous blood flow was significantly decreased in the 100 μL group, the differences were statistically significant when compared with other groups (Fig. 2J). Futhermore, the 100 μL group was selected to analyze the trend of CBF over time. The data showed that the venous blood flow on the brain surface decreased significantly during the micro balloon injection, reached the lowest value after the injection, and then slowly rose back by 30 min after the end of the injection. There were statistically significant differences between the CBF in preinjection and other observed time series. 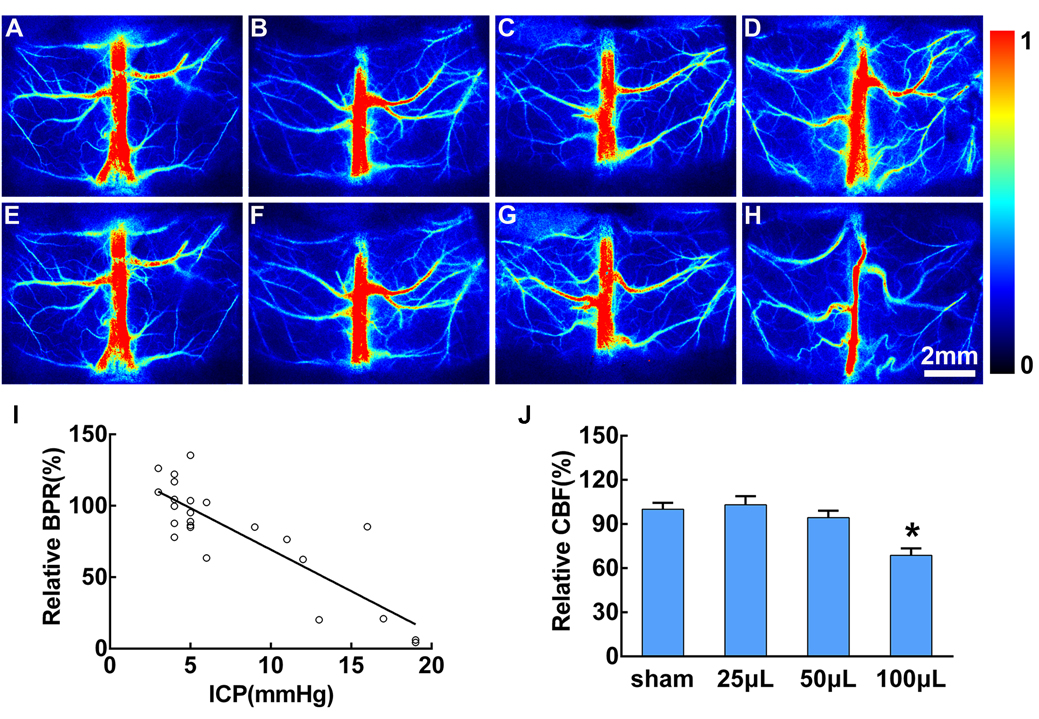 In this study, we successfully established a stable and reproducible model for controllable AEDH in rats by placing a microballoon in the right epidural space. Based on this model, changes of cerebral venous blood flow under intracranial hypertension and the role of cerebral venous hemodynamics in the progression of secondary brain injury were preliminarily described. After AEDH, local intracranial hypertension can cause cerebral venous return restriction, which is an indispensable factor leading to the aggravation of secondary brain injury. However, further studies are needed to provide theoretical basis for monitoring cerebral venous hemodynamics in clinical management of TBI patients.