Influenza and acute respiratory infections are the viral diseases having tendency for fast epidemic spread. The 2009 “swine flu” pandemic caused by the H1N1 flu virus has revealed the need not only for a detailed study of patterns and causes of previous pandemics, properties of viruses, and new strains emergence, but also of an improvement in the characteristics of existing antiviral vaccines. Various types of vaccines are currently used in clinical practice, differing in the development of the immune response and in the level of side effects. 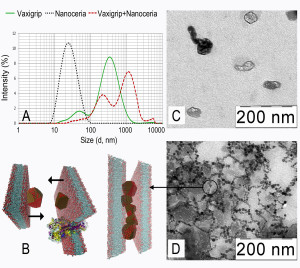 Positive vaccine properties (the ability to generate immunity to the virus) are summarized in the term “immunogenicity”, and the negative ones (the ability to produce adverse reactions) – in the term “reactogenicity”; the ratio of these parameters determines the quality of the vaccine (efficacy and safety). All vaccine formulations possess local and systemic reactogenicity, but it is not always combined with high immunogenicity. Therefore, the development of methods of increasing the immunogenicity of existing vaccines is a vital task. To do this, the world’s leading laboratories are exploring different types of the viral material, methods for their treatment, as well as auxiliary substances – including the use of advanced nanotechnology.

Recently, the effectiveness of vaccines has been shown to be boosted by combining antigens with carrier nanoparticles. Among a plethora of currently available nanomaterials potentially suitable for combining with vaccines, cerium dioxide nanoparticles (nanoceria) possess a unique set of physical and chemical properties that make them especially promising for biomedical applications. It is generally accepted that nanoceria has very low toxicity; moreover, the biomedical application of nanoceria can reduce greatly the damaging effects of oxidative stress, thus protecting living beings from adverse factors including of vaccines reactogenicity. In our previous studies, we have shown that the use of nanoceria could significantly enhance the biological activity of interferon. Considering that both interferon and the components of the influenza vaccines which are responsible for the induction of a specific immune reaction (hemagglutinin and neuraminidase) are glycoproteins, we suggested that the characteristics of the existing influenza vaccines could also be improved by their modification with nanoceria.

Thus, we’ve studied the influence of nanoceria on the immunogenicity of the split trivalent (containing two strains of flu viruses A and one of B) influenza vaccine Vaxigrip in vivo. It was found that ceria nanoparticles act as an adjuvant (enhancer) for Vaxigrip vaccine; high levels of antibodies to all virus strains caused by ceria-modified vaccine (more than 2 months after vaccination) have indicated considerable activation of immune response.

Analysis of the ceria-modified and non-modified vaccine samples by dynamic light scattering indicated that, upon addition of nanoceria to Vaxigrip vaccine, the size of the particles increased; this is evidence of a strong interaction between the split viral particles and nanoceria. The viral fragments were arranged into larger associates by membrane-ceria interaction (Fig. 1). TEM data confirmed the presence of the viral fragments of the Vaxigrip vaccine, and also indicated that the ceria nanoparticles were located as the coupling chains on the borders of viral fragments. Like Frankenstein’s monster, assembled from fragments of different bodies, such multicomponent vaccine composed of fragments of different influenza viruses and nanoparticles turned more “aggressive”, i.e. it activates the immune response more effectively and for a longer period, which ensures the protection from several strains of flu viruses. Such vaccine causes an increase in antibody titers to all antigens in their composition, including the antigens of low immunogenic influenza B virus (Fig. 2). This supposition requires further in-depth study. Nevertheless, we can state that the successful attempt to modify influenza vaccine described herein demonstrates the possible ways of increasing the specific activity of vaccines using nanoceria.