Porous solids are a class of material with high scientific and technological significance. Porosity permits molecules to access the surface and the bulk of the solid. MOFs or Metal-Organic Frameworks are hybrid organic/inorganic materials that are the latest class of crystalline porous solids. MOFs are synthetically made and are among the most porous materials, with in some case record surface areas, one gram of solid reaching up to 8000 m2 i.e., higher than the surface area of a football field. Their high surface area combined to their almost infinite structural and chemical diversity permits a unprecedented facility to tune the host/guest interactions and therefore optimum and tailored properties can be attained, paving the way for 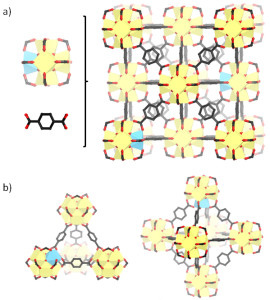 Fig. 1. Schematic representation of Cerium doped UiO-66 material. a) the material is composed of Zr/Ce metal clusters (in yellow and blue respectively) and benzenedicarboxylic acid linkers to form a 3D network composed of b) two types of cages i.e., tetrahedral (left) and octahedral (right).

potential applications in catalysis, sensing, separation, biomedicine etc… Among the large number of porous MOFs reported so far, UiO-66, a MOF material discovered conjointly by the University of Oslo (Universitetet I Oslo) and by CNRS (French center of national scientific research, is made of zirconium metal ions in octahedral geometry connected to benzene dicarboxylic linkers to form a tridimensional network (see the schematic representation below). Its high chemical and thermal stability associated to its easy functionalization make this solid one of the archetypal MOFs reported so far.

When it comes to design a MOF material toward specific properties for potential applications, a rational design is challenging but not impossible. Cerium(IV), a very active redox cation, based materials find many industrial applications such as catalytic converters or redox applications but porous Cerium(IV) based solids are very difficult to obtain, relying mostly on doping various metal oxides. The authors report the introduction of Ce(IV) ions into a porous MOF framework through the doping of UiO-66 by Cerium atoms (2 to 5 % randomly distributed in the UiO material, see scheme below), replacing some of the constitutive Zirconium atoms from the MOF framework. This is just enough to improve its catalytic performance while retaining its structural integrity. Here an example is given in which methanol (a toxic solvent) can be degraded in more environmentally friendly molecules.

Also, Cerium charge in the MOF can change (from Ce4+ to Ce3+ and vice versa), which means that electron can circulate within the material. This opens up a whole set of various applications for this type of doped material. The potential targeted applications of the material comprise electron transport in batteries, sensing and redox catalysis applications.