Molecular chaperones are a very special class of proteins found in all organisms from bacteria to humans. Like their name suggests, they accompany and supervise the correct folding of all the other proteins in cells. This process is essential for proteins, because very often they need to have a precise shape to function correctly. Incorrect protein unfolding is, in fact, the principal molecular basis of many neurodegenerative diseases characterized by conformational changes in proteins that result in misfolding, aggregation and intra- or extra-neuronal accumulation of amyloid fibrils. There are recent evidences that chaperones can provide their fundamental help also when protein association leading to Alzheimer’s disease starts to form amyloid fibrils. To know the chaperones structure in solution means to understand their functional mode and, hence, the possible mechanisms to challenge of the disease. A chaperone that has to be shown to be involved in Alzheimer’s disease and whose levels gradually increase or decrease during carcinogenesis in various organs is Hsp60, GroEL human homolog. GroEL is one of the most exhaustively characterized molecular chaperones in bacteria. We know it works in collaboration with the co-chaperonin GroES and its structure was resolved at atomic level by crystallographers. GroEL is a big protein, in fact, it exists in solution as a tetradecamer, a stack of two seven member rings. Hsp60 has been long supposed to be very similar to GroEL, in fact it works in close collaboration with Hsp10, like GroEL works together with GroES. However, some of us recently proved that Hsp60 presents in solution an equilibrium between single and double rings (heptamers and tetradecamers), and this fact may imply different functional mechanisms. 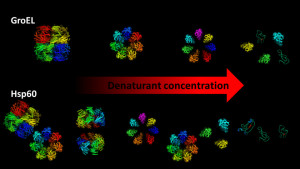 We deepened the structural comparison between Hsp60 and its bacterial ancestor GroEL, and explored their stability against chemical denaturants. The increasing quantity of the denaturant (Guanidine Hydrochloride) can progressively dissociate and disrupt the structure of the protein, hence provide information on the stability of the chaperones, and its folding mechanisms. By the combination of two biophysical techniques, Circular Dichroism, which exploits the specific interaction between polarized light and chiral molecules and Small Angle X-Ray Scattering, which provides low resolution protein structures taking advantage from high synchrotron brilliance, we followed the sequence of dissociation from tetradecamer (14 members) to low-size oligomers, heptamer (7 members) and/or monomer (a single unit) and the progressive protein secondary structure loss.

The unfolding proceeds in a cooperative way between heptamers and tetradecamers for Hsp60, while tetradecamers drive the unfolding of GroEL. The bacterial chaperone results more stable with respect to Hsp60. In addition, we obtained the unfolding free energies as well as their dependence on denaturant concentration by adopting a simple thermodynamic model.

The differences we observed between Hsp60 and GroEL seem to suggest us something about the evolution pattern and open several questions on balance stability/functionality. Research material on these issues are fundamental in our path toward a survey aimed to find biological agents able to assist us in challenging amyloid diseases.