One of the great promises of antibodies is to be magic bullets that specifically target diseased cells without affecting normal cells. Oncology researchers identify targets on tumor cells that are unique, overexpressed, or oncogenic drivers that can be specifically targeted with antibodies in order to identify and decimate cancer cells effectively.  Antibodies are typically specific for a single target. In addition to blocking oncogenic signals, antibodies may allow patients to use their own immune systems, by recruiting NK cells, to help fight cancer. Unfortunately, cancer cells, with their inherent genetic instability, evolve to escape different growth inhibitory mechanisms, such as cancer specific antibodies, by switching their growth dependencies to a different pathway. Designing antibody drugs to target one particular protein may not be effective long term because of the interlacing redundancies and escape mechanisms within protein signal transduction pathways. Like a Whack-a-Mole, as a cancer pathway is inhibited, another one emerges as driver. 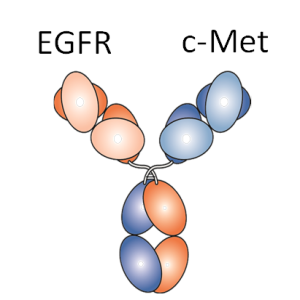 Hence bispecific antibodies can have better activity by modulating more than one pathogenic mechanism of action;   like a two-headed mallet, hitting two moles at once. It is a two-is-better-than-one philosophy, where two at once is better than the additive effect of two individually. By using controlled Fab arm exchange, we have generated a bispecific antibody (JNJ-61186372) that targets both EGF and cMET receptors on cancer cells.

Abnormally high activity of epidermal growth factor receptor (EGFR) has been implicated in the development of a wide range of epithelial cancers, including those of the breast, colon, lung, pancreas, and prostate. Treatment with EGFR inhibitors have been shown to improve survival, but resistance eventually occurs. Resistance can be linked to the hepatocyte growth factor receptor (also known as cMET) which is involved in cell proliferation, survival, motility, and cancer cell invasion. Elevated cMET activity has been associated with worse prognosis in lung cancer. JNJ-61186372 was designed to simultaneously control both the EGFR and cMET signaling pathways. 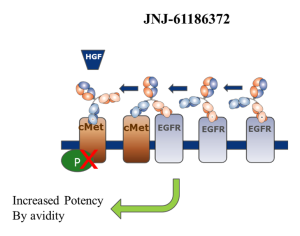 In the JBC paper (Jarantow SW et al., 2015 ), we demonstrate how JNJ-61186372 can bind simultaneously to both EGFR and c-Met using purified protein and on cell lines. Cell binding and EGFR and cMet phosphorylation inhibition by JNJ-61186372 depends on the levels of EGFR and cMet receptor density (as well as mRNA level) on the cell surface. Using a one-armed EGFR or cMet antibody, cell surface receptor density was measured. Interestingly, there was a bias of JNJ-61186372 binding towards the more highly expressed of the two receptors, EGFR or cMET. This bias of binding resulted in the enhanced in vitro potency of JNJ-61186372 to inhibit receptor phosphorylation of the lower level expressed target. On the basis of these observations, we propose an avidity model of how JNJ-61186372 engages EGFR and c-MET. In cells with higher levels of EGFR, the EGFR targeting arm of JNJ-61186372 binds to EGFR on the cell surface, increasing the quantity of EGFR bound antibodies to diffuse at the cell surface until binding to low abundance cMET receptor. Thus there can be a depot effect that results in having the EGFR targeting arm initially binding the cancer cells and increasing the probability of subsequent cMet binding arm to bind low density cMet receptor. In the JBC paper, we also demonstrate that conversely, cells with higher levels of cMet provide the avidity required for JNJ-61186372 to effectively inhibit EGFR signaling.

Affinity, target antigen density, and antibody binding are highly interdependent. That is, the binding of a lower affinity antibody arm will be influenced to a greater extent by the binding of a higher affinity antibody arm. Therefore, lower affinity bispecific antibodies might offer increased tolerability as avidity will depend on binding simultaneously to two antigens preferably expressed on cancer versus normal cells. This argument suggests how target antigen density and affinity might be used to guide bispecific antibody design.