Gold nanoparticles (Au NPs) constitute one of the most interesting model systems in the area of heterogeneous catalysis. Au NP hybrids with hollow nanocages, alloyed nanoparticles and core-shell structure play important roles in harvesting light energy and function as active catalyst in chemical reactions. For example, graphitic carbon nitride quantum dots and nanosheets composite well with Au NPs show enhanced photocatalytic property under UV irradiation. Hybrid of Au NP and multi-walled carbon nanotube acts as superior catalyst for hydrogenation of a series of substituted nitroarenes due to the concomitant presence of Au0 and AuI in the Au NPs. Porous carbon-supported Au NPs using molecular gold nanoclusters as precursors to perform regulated catalysis of oxygen is known. 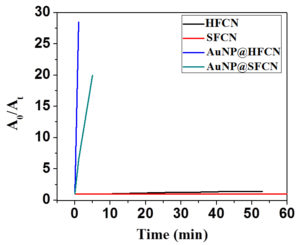 Fig. 1. Relative change in absorbance for SFCN, HFCN and AuNP@HFCN for the conversion of 4-NP to 4-AP.

This article proposes the development of a composite of fluorescent carbon nanoparticles (FCNs) and Au NPs and their application as catalyst. Promising electrical conductivity, high charge carrier mobility and bright photoluminescence have made the FCNs very good alternative supporting materials. This work has described production of chemically reduced Au NPs using hollow FCNs (HFCNs) that resulted into embedded Au NPs in the carbon substrate.

In the article, reduction of 4-nitrophenol (4-NP) to 4-aminophenol (4-AP) has been used as a model reaction. In general, reduction of 4-NP takes place with sodium borohydride (NaBH4) to produce 4-AP. The other purpose of choosing this reaction model is because of the fact that nitrophenol is one of the most hazardous organic pollutants that originate from industrial and agricultural wastes and its conversion to aminophenol, which is a precursor of some drugs, would help making the environment greener.

A mixture of appropriate amounts of glacial acetic acid, water and diphosphorus pentoxide yielded a brown foaming and sticky material in 10 minutes that, on cooling, and extraction with ethyl acetate produces the HFCNs. The AuNP@HFCN composite was synthesized using HFCNs as reducing agent and HAuCl4 as the Au precursor. The average size of the synthesized HFCNs was around 45 nm and diameter of the pore was ~30 nm providing an internal void volume of ~14000 nm3.

Reduction of 4-NP hardly takes place without catalyst even in presence of a large excess of NaBH4. This paper shows, that although solid FCNs (SFCNs) can initiate some transformation of 4-NP to 4-AP in absence of NaBH4 in aqueous medium, addition of HFCNs shows much accelerated conversion (Fig. 1). The change could be monitored from absorption spectroscopy that showed a decrease in the characteristic peak of 4-nitrophenolate at 407 nm after the induction period and growth of a new band at 298 nm with time. The catalytic mechanism has been hypothesized to proceed through reaction of the BH4– ions with the FCNs to form surface hydrogen species. During the induction period, the nitrophenolate ions get adsorbed on the unoccupied sites of the carbocatalyst. The hydrogen species formed from borohydride along with electrons get transferred to nitrophenolate ions and reduces the nitro group of 4-NP to amine. The catalytic activity is found to increase considerably with HFCNs compared to the SFCNs because the former provides a cavity for the reaction to occur in confinement.

It was observed that addition of Au NP inflates the catalytic activity of SFCN manifold and doubles with HFCN. It is believed that the dual action of the cavity of HFCN and the properties of Au NP is responsible for the super catalysis. SFCN and HFCN provided rate constants 4.16 x 10-7 and 1.285 x 10-4s-1, respectively that rise to 3.11 x 10-2 and 6 x 10-2 s-1 with AuNP@SFCN and AuNP@HFCN.