We use two types of laundries. One is dry-cleaning which is carried out using an organic solvent, and another is wet laundering is carried out using water and soap (surfactant). These observations are scientifically applied for the separation of a variety of compounds. The separation method is called “Chromatography” that was proposed by a Polish botanist Tswett in 1906. He observed that several color pigments from a vegetable extract in a glass tube packed with calcium carbonate. Such experiment can be performed at home.  You prepare a piece of white cloth or paper, ink, and liqueur. Dot the ink at one corner of cloth or paper, then dip the end in the liqueur. Liqueur moves on the sheet; then the ink follows, and the components are separated, because an ink color is a mixture of a variety of dyes and paints. When you use a polyester cloth, which is water resident, add soap (surfactant) in water to observe the moving color. The latter approach is an example of a scientific experiment, called reversed-phase ion-pair liquid chromatography. 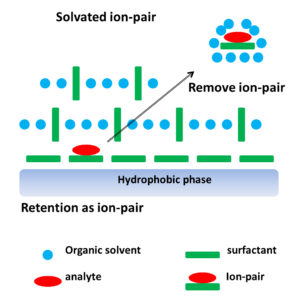 Fig. 1. Modeling of reversed-phase ion-pair liquid chromatography, where an analyte is retained by ion-pair formation; then, the paired-ion is removed by solvation.