Chemokines, an answer to the gut inflammation?

Our gut is a complex organ which not only digests the food but also acts as an immune organ. The gut is lined by a single layer of specialized cells called as intestinal epithelial cells (IECs) which form a physical barrier between the gut and an external environment which contains a variety of foreign materials like food and gut microorganisms. IECs are underlined by specialized immune tissue called as gut-associated lymphoid tissue (GALT) which contains different kinds of ‘ready to attack’ immune cells like T cells, B cells, dendritic cells, and macrophages. IECs form a strong sensing device that responds to the external stimuli by secreting specific messenger molecules called as cytokines and chemokines which play a major role in shaping the local immune system and maintaining gut in a healthy state. 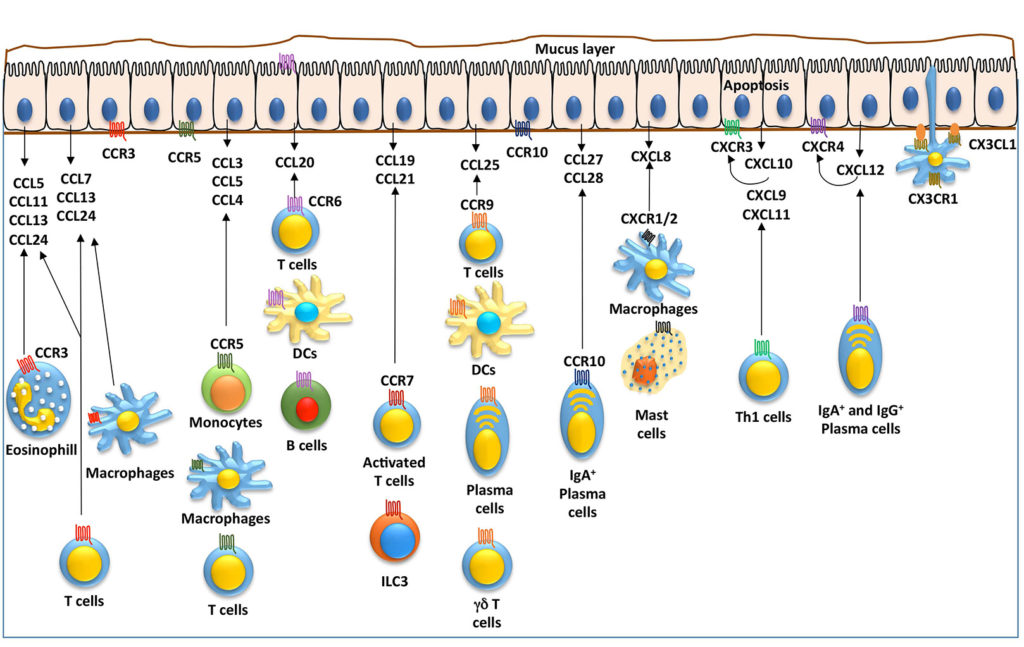 Chemokines are a large family of small structurally related protein molecules with well-established roles in directional recruitment and migration of cells. The chemokines secreted by IECs dictate the migration of immune cells into the gut. Moreover, IECs themselves express several chemokines receptors which regulate the differentiation, migration, and death of epithelial cells. There are a group of lymphocytes called as CD4 T cells and based on their identity and function they can engage in combat with gut pathogens. These cells develop in the thymus and migrate to the other parts of the body including GALT. Their migration is guided by a unique receptor present on cell surface known as chemokine receptor which senses the gradient chemokine molecules and drives the migration of various immune cells from peripheral tissues to the GALT (Fig. 1). For example, CCL11, a chemokine secreted by IECs is a potent recruiter of eosinophils and cause significant colon inflammation. CCL5 recruits Th1, a type of inflammatory CD4 T cells which plays important role in the pathogenesis of IBD. Similarly, chemokine receptor CCR6 and its ligand CCL20 along with the microbiota regulate the balance between functionally effector Th17 (a subset of CD4 T cells express cytokine IL-17) and regulatory CD4 T cells (Tregs), and any disturbance in their number or function influences the pathogenesis of colitis. Apart from above, chemokine receptors, CCR9, CCR10, CXCR1, CXCR3, CXCR4, CX3CR1, and their chemokine ligands are also known to play important roles in maintaining gut homeostasis and immune response (Fig. 1).

The key role of chemokines and chemokine receptors in the pathogenesis of gut-associated diseases makes them a potent drug target. Different strategies have been used to develop chemokine targeted therapies and tested against several inflammatory diseases. Drug Maraviroc and AMD3100 that target CCR5 and CXCR4, respectively are used successfully against IBD. ALX-0651, a Nanobody inhibiting CXCR4 shows a similar effect and clinical efficiency as AMD3100. Orally available CCR9 antagonist CCX282-B was developed to control IBD and Phase-III clinical trial was conducted but gained very limited success. But, chemically modified CCX282-B showed significant improvement. Anti-CCL20 antibody also went to Phase-I clinical trial for IBD. The anti-CX3CL1 mAb showed dramatically improved colitis lesion in mice. Even though Chemokine-based therapies have been developed but several of them have been dropped out after clinical trials because of lack of efficacy or side effects. Because chemokines not only recruit immune cells but also affect their functions, thus while designing the chemokine targeted drugs we need to consider their effect on the gut immune system. Most of the mechanistic details of chemokine and chemokine receptor biology are derived from the animal studies, and their functions in humans are poorly understood. Thus, extensive studies on human chemokines and their effect on the cellular immune response will be a big boost toward the development of effective drugs.