Familiarity with different foods is one factor that has been proposed to explain childhood eating behaviours such as picky/fussy eating and the rejection of uncommon or novel food stuffs. Some research has suggested that this rejection of novel or unknown food stuffs in children (otherwise known as ‘food neophobia’) stems from visual biases or, in simple terms, ‘what the food looks like’. However, to date, little research has focused on the investigation of visual looking preferences (or biases) in children with and without a tendency towards picky/fussy eating and/or food neophobia. This is despite the fact that in other phobias (e.g. spider-phobia), we know visual biases play a very important role. For example, individuals’ with fear-related phobias, and/or anxiety, will typically notice and look at their ‘feared’ stimuli much quicker than individuals without such fears. Therefore the purpose of this research was to investigate if children with a tendency towards food neophobia displayed visual looking biases towards certain food stuffs. So do children with a tendency towards neophobia and/or picky/fussy eating pay more attention to unfamiliar food stuffs as compared to familiar foods stuffs? 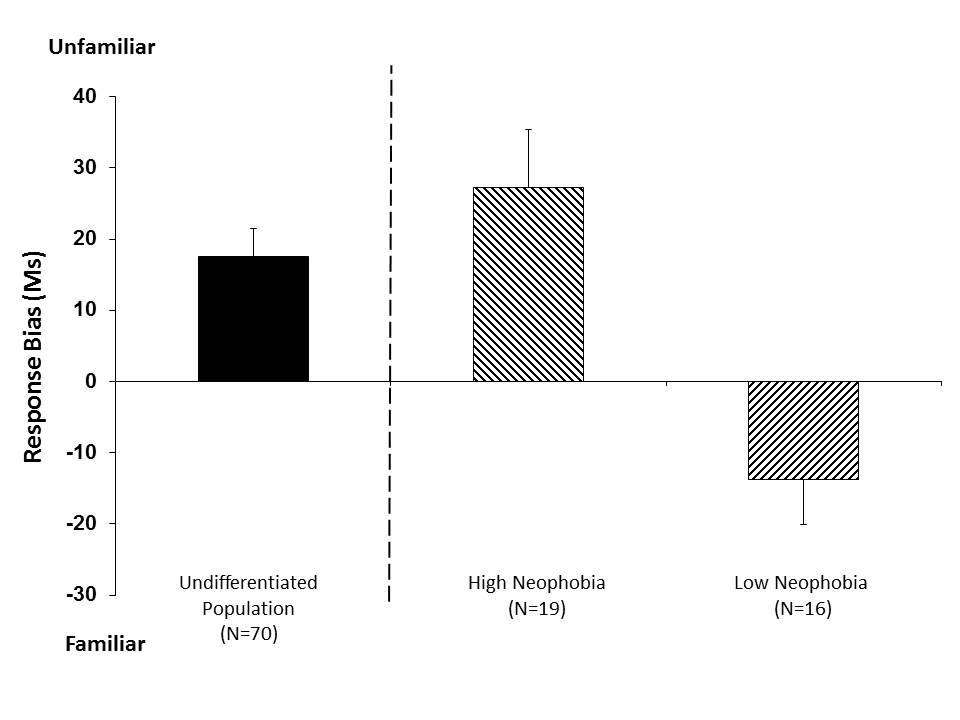 To investigate this, we recruited 70 eight to eleven year old children with differing levels of food neophobia and got them to complete a task in which paired photographs of familiar and unfamiliar fruits and vegetables were shown. On each trial one of these images was then replaced by a star. Measuring how quickly the child responds to the star allows an accurate indication of which food stuffs they were paying attention to. After this task, we also got the children to complete questions related to their fear of eating familiar and unfamiliar foods as well as their willingness to try certain foods. Our results revealed that when analysing all of the data together, children typically demonstrate a visual preference to first look at the unfamiliar fruits and vegetables. However, this visual preference towards the novel food stuffs was significantly exaggerated in children reporting high food neophobia, and missing in children reporting low food neophobia. In addition, we also found that the less willing a child was to try any of the various pictured fruits and vegetables, the more likely they were to demonstrate a looking preference towards the unfamiliar fruits and vegetables. As such our results suggest that basic visual aspects of food stimuli, such as their novelty/unfamiliarity, play an important role in childhood food neophobia. This result is important because it demonstrates that like other fear-related phobias and anxieties, visual processes may play a very important role in childhood food neophobia. Our results are also important because based upon them we suggest that something as simple as ‘brain training games’ (in which food stuffs are repeatedly visually presented to children in fun ways) could be of use in the treatment of childhood food neophobia. We argue that this would be a good area for future research.