Cholesterol: the eyes have it

Cell membranes are a complex mosaic of lipids and proteins. The membrane phospholipids are arranged in a bilayer with their polar heads interacting with the surrounding water and their hydrocarbon tails forming a hydrophobic core. Membrane proteins are embedded in the bilayer or are associated with the bilayer surface. The precise properties of the membrane bilayer depend upon the properties of the lipids and the proteins that compose it. An essential component of most animal cells is cholesterol, which is involved in an array of cell functions. The mechanism of its action involves both its ability to alter membrane lipid bilayer properties and to directly interact with membrane proteins. The review summarized here focuses on cholesterol modulation of the activation of rhodopsin, the light sensitive protein embedded in the disk and the plasma membranes of the retinal rod outer segment (ROS) (Fig. 1). Rhodopsin is of particular interest because it is the archetype of the large family of G-protein coupled receptors, which are responsible for cellular response to a wide array of signals. 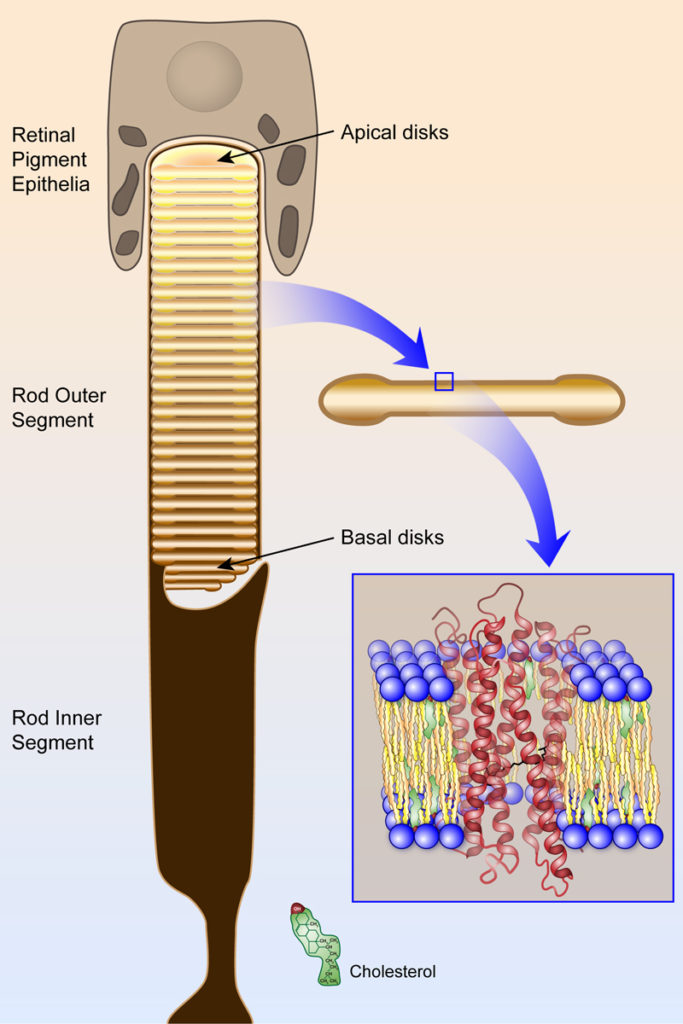 Fig. 1. The Rod Outer Segment. The decrease of disk membrane cholesterol and increase in the phospholipid unsaturation as disks are apically displaced is indicated by the dark to light gradient. Rhodopsin is shown embedded in the membrane bilayer.

The ROS consists of a stack of flattened disk membrane vesicles surrounded by a plasma membrane (Fig. 1). Light impinging upon the disk membrane induces a conformational change in the rhodopsin structure. This critical shape change allows a G protein, transducin to bind and become activated, thus triggering a cascade that culminates in the visual response.

The disk membranes are synthesized at the base of the ROS and are displaced over the next several days to the apical tip. The lipid composition of disks is modified during this transit. The studies reviewed show that the cholesterol composition of the ROS plasma membrane and newly synthesized disks is approximately 30%. As the disks are displaced, the cholesterol in the disks drops to less than 10%. This drop in cholesterol is accompanied by an increase in the unsaturation of the hydrocarbon region of bilayer lipids.

If the cholesterol composition of the ROS deviates from the normal composition, degenerative disease and other visual defects may result. Royal College of Surgeons rats provide a model of degenerative disease. These rats exhibit an abnormal cholesterol distribution among the disks and plasma membrane.  In the human disease, Smith-Lemli-Opitz (SLOS) syndrome there is a decreased ability to synthesize cholesterol. It is clear that cholesterol plays a complex role in the maintenance of photoreceptor structure and function.