Higher-order chromatin structure (architecture) plays the crucial role in DNA transcription, replication and repair. Defects to DNA architecture are permanently caused by internal cellular processes and various environmental factors, such as exposure to chemicals or ionizing radiation. In the present contribution, we point to changes in DNA higher-order chromatin structure after freezing-thawing of normal and tumor cells, respectively. Induction of DNA double strand breaks (DSBs), the most serious type of DNA lesions, remains a controversial issue in chromatin damaging by freezing-thawing processes.

While several studies reported extensive chromatin fragmentation, other studies failed to observe DSBs or recognized them only in subfractions of cells that were somehow defective already prior to freezing-thawing. 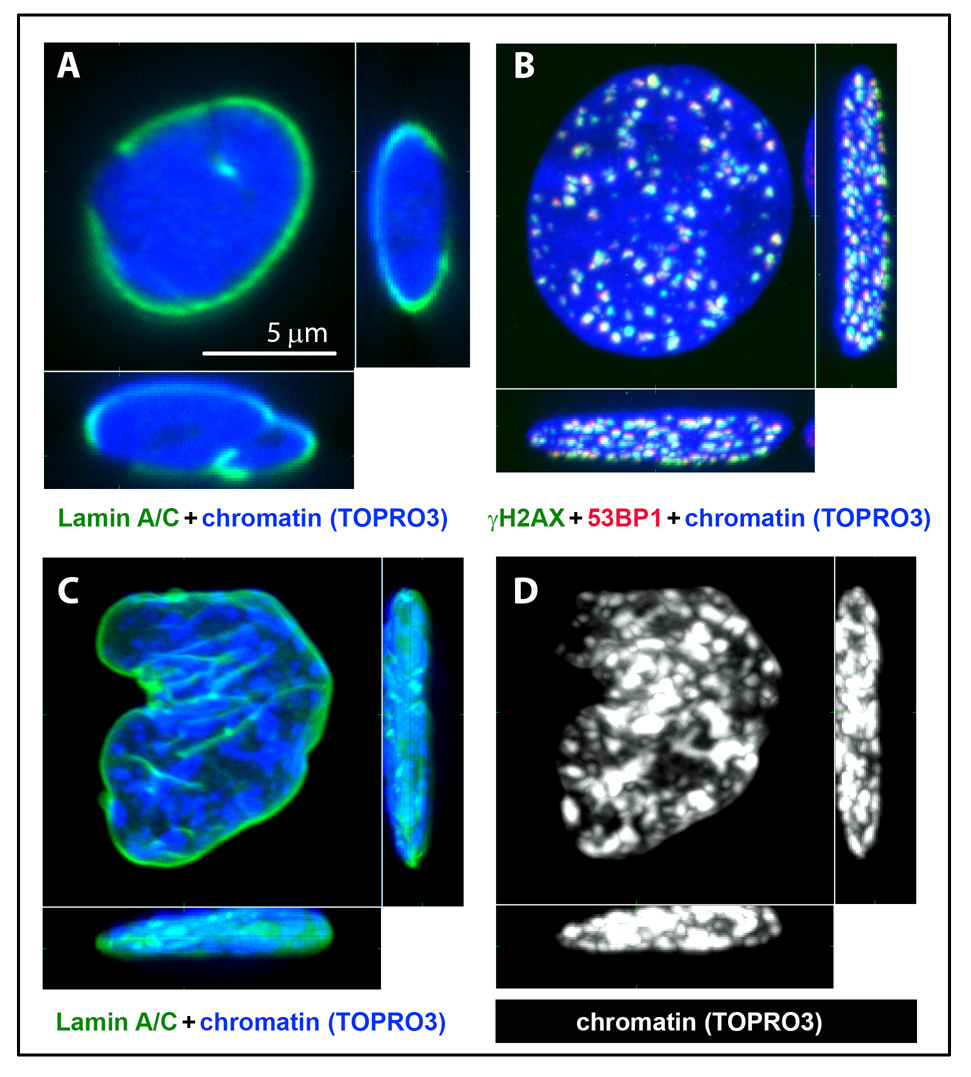 Interestingly, similar to the last alternative, we detected high amounts of DSB repair foci (marked by γH2AX and 53BP1) only in relatively small proportions of normal and cancer cell populations. The size of these proportions depended on the cell type and correlated with its proliferation capacity. Consequently, we identified the affected cells with just replicating (S phase) cells and DSBs with collapsed replication forks. The remaining (non S-phase) cells that were frozen-thawed without cryoprotectants showed dramatically damaged higher-order chromatin architecture but not DSBs (Fig. 1A). Importantly, the alteration to the higher-order chromatin structure, often associated with the disruption of the nuclear envelope (Fig. 1A), was to a different extent reduced by various generally applied cryoprotectants, such as anti-freeze proteins, trehalose, glycerol, and DMSO. On the other hand, the collapse of replication forks in S-phase cells (Fig. 1B) appeared independently of cryoprotection.

All types of DNA damage then correlated with the viability of frozen-thawed cells. In contrast to antifreeze proteins and trehalose, DMSO and glycerol (to a lower extent)— the cryoprotectants known to penetrate the cell nucleus—were recognized as the most efficient. We showed that this efficiency is based on the ability of DMSO/glycerol to dehydrate and condense chromatin before freezing (Fig. 1C,D), which reduces higher-order chromatin architecture changes provoked by freeze-thaw processes. Moreover, as faster replicating compared to normal cells, cancer cells were more sensitive to the replication fork collapse, probably followed by secondary induction of DSBs at the affected chromatin sites.

Collectively our results suggest that cryoablation could be an efficient (supportive) approach in treatment of some cancers and, at the same time, point to the important aspects of the mechanism of function of some cryoprotectants, thus facilitating the rational design of more efficient compounds.