Cancer is an age associated disease. In Western countries with people having longer life expectancies than e.g. 100 years ago, this means at present that 1-2% of those individuals are confronted with the diagnosis of leukemia during their lifetime. Leukemia, also referred to as ‘blood cancer’, originates from abnormal bone marrow cells.

Cancer cells are literally ‘abnormal’ compared to other cells of the human body: they have different shapes, properties and also behavior, e.g. in terms of their growth rate. It is common sense that all these ‘abnormal properties’ derive from an ‘abnormal genetics’ of tumor cells. And the ‘abnormal genetics’ differs from tumor type to tumor type (e.g. a specific leukemia compared to a breast tumor). Even within the same tumor entity, subclasses with different clinical outcomes can be defined, based on their genetic properties. Thus, a very important step during cancer diagnoses is to study the cancer cells by specific molecular genetic approaches. 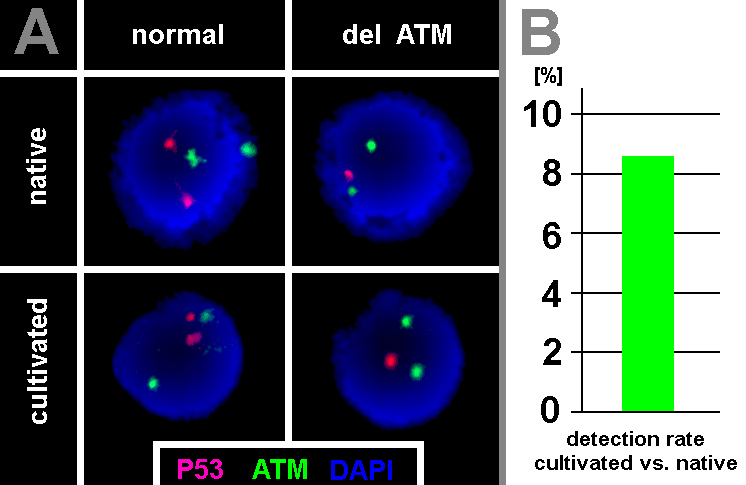 Fig. 1. A) Detection of genetic alterations, being done by fluorescence in situ hybridization (FISH) in interphase nuclei of two chronic lymphocytic leukemia (CLL) patients, is shown. In the first column two interphase nuclei with blue (= DAPI) counterstain and two red and two green signals are shown, indicating for a normal result and no deletion in P53 and ATM gene. In the second column the nuclei again show two green but only one red signal, i.e. a deletion of the ATM-gene was found. As visible, good FISH-signals can be obtained in native material as well as in cultivated one.
B) A comparative study of 60 CLL cases revealed, that detection rates of such deletions as shown in Fig. A are >8% higher in cultivated CLL cells compared to native ones.

The most frequent leukemia type of advanced age in Western countries is chronic lymphocytic leukemia (CLL). CLL is a heterogeneous acquired disease. First diagnosis is on average around 70 years; at time of diagnosis the patient may already have the problem since several years, as symptoms are mostly unspecific. The CLL patient may see the MD due to painless enlarged lymph nodes, night sweats, fatigue, fever, weight loss, frequent infections and / or pain in the upper left portion of the abdomen and enlarged spleen. In general, CLL progresses very slowly. In 60% of the cases a progression may be observed 5 to 10 years after diagnosis, however up to 25% of CLL progress fast towards acute phase leukemia.

Nowadays, molecular genetic diagnostic approaches like the so-called fluorescence in situ hybridization (FISH) technique allows for rapid analyses of genetic alterations being present e.g. in CLL. Important prognostic markers in CLL comprise loss of genetic material (called ‘deletions’) in specific chromosomal regions of the human genome, being restricted to the tumor cells. Based on the FISH-results (Fig. 1A) it is possible to align individual patients with their specific risk to experience a quick or slow progression of their disease. A favorable course of CLL can be expected if deletions are present only in chromosome 13, while bad prognoses is associated with deletions in chromosome 11 (the so-called ATM-gene) and/ or chromosome 17 (P53-gene) (Fig. 1A). In other words: in case an adverse predicting deletion is found, the CLL patient will receive a different treatment than such patients with favorable genetic markers.

In a recent study we could show that such prognoses relevant deletions can be much better detected in cultivated than in native cells. Detection rates were more than 8% higher in cells grown for 4 days with a CLL specific culture medium (Fig. 1B). This was surprising, as it is common sense that it is always better to study native rather than cultured material. The idea behind is, to be closer to the natural state being present in the patient. Here CLL has been shown to be an exception to this rule, as obviously the applied cell culture conditions are extremely suited for growth and later detection of malignant CLL-cells. Diagnostic schemes should be possibly adapted for the sake of better patient care and FISH studies should be done in cultivated cell rather than native ones.