Chronic myeloid leukaemia (CML) is a haematological malignancy caused by a chromosomal translocation that places the c-ABL oncogene, normally located on the long arm of chromosome 9, under the control of the breakpoint control region (BCR) on chromosome 22 (Fig. 1A). The product of this translocation, known as the Philadelphia chromosome, encodes the BCR-ABL fusion protein which is both necessary and sufficient for malignant transformation of granulocytic precursors through a process that involves deranged DNA repair, checkpoint control and growth factor signalling (Fig. 1B). 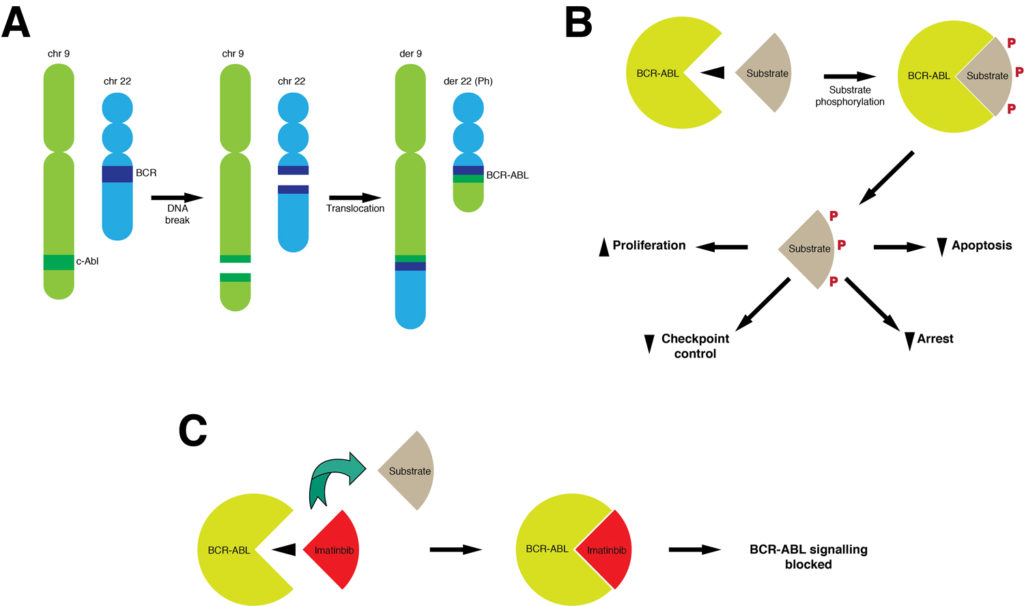 Fig. 1. BCR-ABL in pathogenesis and treatment of CML. (A) BCR-ABL fusion gene is formed by a reciprocal translocation which places the C-ABL oncogene on chromosome 9 under the control of the BCR locus on chromosome 22. The der 22 chromosome containing the BCR-ABL fusion product is known as the Philadelphia chromosome. (B) Phosphorylation of multiple targets by the BCR-ABL fusion kinase leads to deregulation of key cellular processes such as proliferation, checkpoint control, cell cycle arrest and apoptosis. (C) Mechanism of action of imatinib: by binding the active site of BCR-ABL, imatinib blocks downstream signalling from BCR-ABL.

Before the advent of modern therapeutic era, the mainstay of treatment of CML included chemotherapeutic agents, which were able to offer only temporary disease control and were associated with median patient survival of less than 6 years. In the 1980s and 1990s, introduction of interferon alpha, a potent immuno-modulating drug, into the therapeutic armamentarium, offered long-term disease control to a subset of patients (~30%), albeit marred with a slew of treatment related adverse effects (AE). However, this was all about to change in 1996, when high-throughput analysis identified a potent molecular inhibitor of the BCR-ABL fusion protein, imatinib, also known under its commercial name as Gleevec/Glivec, which interferes with signalling through the aberrant BCR-ABL product but not the normal C-ABL protein (Fig. 1C). In various trials, imatinib was able to induce a complete cytogenetic response (CCR, undetectable Philadelphia chromosome at the level of conventional cytogenetics) in up to 85% of patients and a major molecular response (MMR, >1000-fold reduction in BCR-ABL transcript level) in 53% of patients after one year of treatment. Long-term data show that the overall survival of CML patients on imatinib is 95% at 6 years, a figure that could have only been dreamed of in the era of conventional chemotherapy. The drug was well tolerated, with the most significant adverse effects being diarrhea and peripheral edema. Subsequent years have seen the development of second generation tyrosine kinase inhibitors (TKI), including dasatinib (Sprycel), nilotinib (Tasigna) and bosutinib (Bosulif). Each new generation of inhibitors was associated with more potent kinase domain inhibition and deeper repression of BCR-ABL transcript levels, albeit with some new and unique AE. For example, up to 82% of patients on dasatinib achieved a MMR within 18 months of therapy and 76% of patients maintained a MMR at five years. While gastrointestinal side effects and edema were still common, almost 20% of patients developed a pleural effusion, an AE rarely seen with imatinib. Interestingly, increased potency of BCR-ABL inhibition seen with newer generation TKI did not translate into improved patient survival: the 5-year survival rates of patients on dasatinib and nilotinib are 91% and 96%, figures very similar to those reported with imatinib.

Finally, while most drugs were effective against a number of BCR-ABL kinase domain mutants, none were able to target the T315I mutation, which confers resistance to TKI therapy in some CML patients. Ponatinib, the third generation TKI with activity against BCR-ABL with a T315I mutation has not been approved in first line setting due to concerns of thromboembolic events. Ponatinib excluded, multiple highly effective drugs are therefore available for front-line therapy of CML and the choice of therapy does not appear to affect patient survival but rather depends on patient-specific factors such as pre-existing comorbidities as well as lifestyle and reimbursement. The appearance of generic drugs on the global market, appears to be changing patient options. Future years will likely see a better understating of safety issues and issues related to TKI discontinuation, which currently appears to be feasible in approximately 40-50% of patients who achieve deep molecular response.