Temporary streams are those that undergo recurrent cessation of water flow or even complete disappearance of surface water. Waterways in which flow interruption occurs are frequent at headwaters in any climate type and are particularly conspicuous in Mediterranean, semi-arid and arid climates. Aquatic life in these streams can be very diverse and especially adapted to the recurrent lack of water. Even after the cessation of flow, water pools can remain during several months acting as refuges for aquatic life. Despite temporary streams have been largely disregarded for management and research, there is a growing interest in their study, because they are a relevant part of fluvial systems and provide unique spots of biodiversity. Current research acknowledges that they must no more be considered as stressed permanent rivers, but as a special type of fluvial systems. 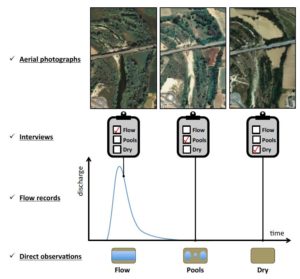 Fig. 1. Aerial photographs and direct observations are adequate for instantaneous determinations of the aquatic state. Interviews and flow records allow lasting estimates of their temporal patterns (stream regime). Note that flow records are unable to separate pools from dry states.

Many of the temporary streams have natural temporal patterns of flow and desiccation, but others suffer impairment of flow due to water abstractions (decreasing the length and frequency of flow periods) or to water spills (changing the regime from temporary to permanent). These hydrological alterations jeopardize the quality of these worthwhile ecosystems. Furthermore, the prevalence of temporary streams is expected to increase in the next future due to both increasing water human use and global change.

One of the main difficulties when studying or managing temporary streams is the lack of knowledge of their regimes. The regime of rivers is usually determined from continuous flow measurements made at gauging stations, but there are two main difficulties when this method is applied to temporary streams: (i) there is a severe lack of gauging stations in temporary streams (low interest to measure flow in dry streams) and (ii) gauging stations are inadequate to detect the occurrence of water pools after the cessation of flow. Indeed, current developments propose that the regime of temporary streams must not be defined as a chronicle of (quantitative) flows but as a sequence of transient (qualitative) states that offer diverse possibilities for the development of life. The full regime sequence defined for ecological applications is composed of six ‘aquatic states’, from flooding to complete surface and subsurface drying of the stream bed.

This regime categorization for temporary streams can be simplified into three simple states: the occurrence of flowing water, stagnant pools and dry stream bed. This facilitates the use of alternative methods for obtaining information of their temporal patterns. In this sense, interviews made in areas nearby the fluvial systems were successfully tested. The relative duration of flow was reasonably assessed, although the seasonal pattern was only partly reproduced for some test streams. The examination of series of aerial photographs provided also good results for assessing the relative duration of flow, although the temporal patterns could not be examined due to the limited number of images and the unawareness of the dates of capture.

Nevertheless, no one of the three tested methods (flow records, interviews, aerial photographs) was adequate to obtain information on the six aquatic states. These aquatic states may be easily determined in the field by professionals or slightly trained citizens; instrumented points and aerial photographs being necessary for temporal and spatial integration of the data obtained by the observers. Involving citizens in hydrological and environmental surveillance has many advantages in terms on temporal and spatial coverage of observations, as well as on public engagement in environmental problems and solutions. For these purposes, the LIFE TRIVERS project is developing freely-available tools for both professionals (the TREHS software) and citizens (a smartphone application).