Much has been written about ‘climate scepticism’, especially in the United States. Far less attention has been paid to Australia, despite the fact that climate change has emerged as a central issue for Australian politics and science.

Fig. 1. Use of ‘climate sceptical’ labels in All English Language News (Lexis Nexis)

The labels that are used to describe groups in societies play a key role in how we come to view these groups and how credible we perceive them to be. When studying the use of labels for those who hold critical views of mainstream climate science, we found that one of the earliest labels used in the media was that of ‘greenhouse sceptics’, and that it was first used in Australia. In our article for Public Understanding of Science we explored in some detail how this label has been used in Australian print media.

The label ‘greenhouse sceptic’ was first used in 1989 as soon as scientists began to talk about the dangers posed by the greenhouse effect.

When tracing the use of the label ‘greenhouse sceptic’ in Australian print media, we found three peaks which mirror events in Australian politics: 1990, when the first Australian greenhouse gas emissions reduction proposal was submitted to Cabinet; 1997, when at Kyoto Liberal Environment Minister, Senator Robert Hill, secured a controversial concession which allowed Australia to increase its emissions by 8%; and 2006, when climate change was in the top five issues of concern to Australian voters. 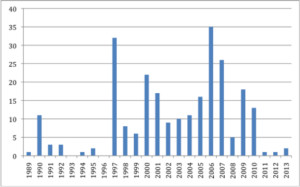 Between 1990 and 2006 the label ‘greenhouse sceptic’ performed two functions: (1) to label and criticise those seen to be outside the perceived consensus about climate change, or (2) to proudly (self-) label those fighting this consensus and exposing its perceived flaws, especially in relation to uncertainty and alarmism. Thus, the label performed important functions for self-identity and intergroup relations.

In 1990 scientists and sceptics began to be constructed as two distinct social groups. A focal point for discussion was Daly’s 1989 book The Greenhouse Trap: Why the greenhouse effect will not end life on earth. Climate scientists were accused of alarmism, while sceptics positioned themselves as ‘real scientists’ upholding the norms of science. This reflected a struggle for credibility between the two groups.

In 1997 greenhouse scepticism gained momentum. A popular book, The Heat is On: Climate Crisis, the cover up, the prescription, by the US author Ross Gelbspan, was used to brand climate scientists as ‘bullies’ and the label ‘greenhouse sceptic’ came to be used with pride. Articles published during this period and, particularly, those published in response to Gelbspan’s seminal book accentuated the divide between mainstream climate scientists and climate sceptics, and illustrated a more assertive sceptical identity.

2006 was Prime Minister Howard’s final year in office, amid important climate-related events, such as the IPCC’s fourth climate report and Al Gore’s film The Inconvenient Truth, combined with Australia experiencing its worst drought on record. Climate scientists attempted to re-appropriate the ‘sceptic’ label for themselves and to label ‘greenhouse sceptics’ as ‘contrarians’ and ‘deniers’. This led to a backlash by ‘sceptics’ against the label ‘denier’ which was seen as discriminatory. This move contributed to strengthening a sceptical identity.

Our article shows how labels and metaphors play an important role in the climate change debate, as they separate actors into sides, construct identities and imbue these identities with meaning and value. However, they can also inhibit debate and lead to political paralysis – leaving both sides at loggerheads, rather than willing to talk.