Clostridioides difficile infections: what is new in laboratory diagnosis and clinical treatment

Clostridioides difficile infections (CDI) have become a major economic issue from developing countries as well as from the Western World. Early and accurate diagnosis of CDI allows earlier treatment, which can significantly reduce the morbidity, mortality, medical cost, and family burden. An effective diagnosis of CDI requires both clinical symptoms and a positive laboratory test. The key clinical manifestation is diarrhea, which is defined as loose stools, and is usually accompanied by abdominal pain as well as by systemic features such as fever, hypotension, and/or shock. Diagnostic methods target different aspects of CDI (Fig. 1) and include toxinogenic culture (TC), cell cytotoxicity neutralization assay (CCNA), enzyme immunoassays (EIA) for toxins, and/or glutamate dehydrogenase (GDH), and nucleic acid amplification tests (NAATs). Each of these tests have been used for laboratory diagnosis. However, a two-step algorithm starting with either NAATs or GDH-EIA tests is currently recommended. For this algorithm, samples with a negative result from either NAATs or GDH-EIA tests are reported as CDI negative, but those having a positive result should be tested for toxin using a toxin-EIA. Samples that test positive by this second toxin-EIA test are reported as CDI positive. It should note that relying too much on NAAT especially PCR testing in low-risk patients may lead to the misdiagnosis, as C. difficile PCR is a very sensitive method and frequently identifies colonized patients. Colonized patients should have contact precautions, but do not require treatment. 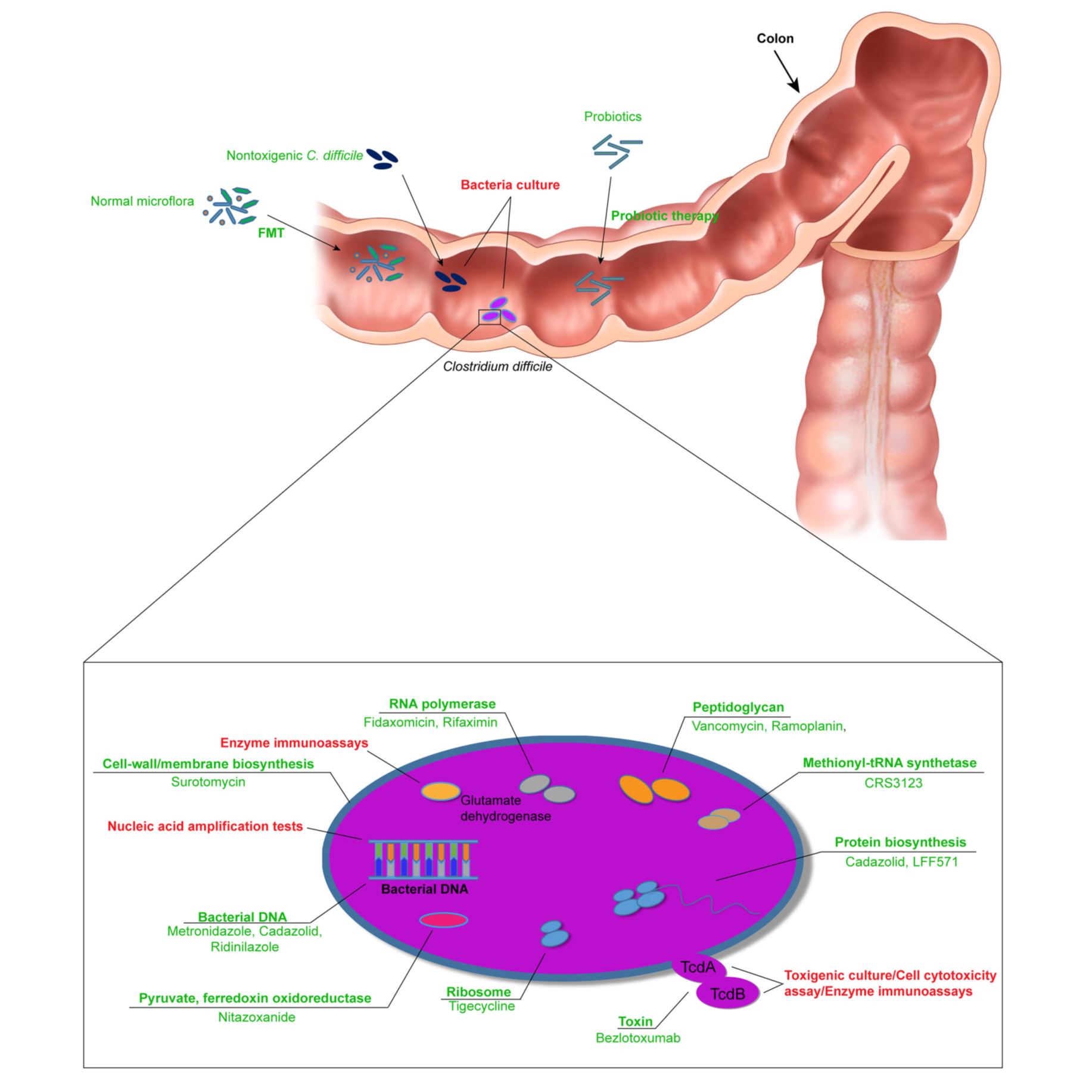 Oral antibiotics remains the first choice for the treatment of CDI. Recommended antibiotics that are effective and currently available include metronidazole, vancomycin, and fidaxomicin; each works through different mechanisms (Fig. 1). Many other antimicrobial agents including emerging antibiotics, synthesized and/or natural compounds as well as phage-derivates are being studied in the laboratory phases, and/or being evaluated in clinical trials. It should be noted that specific antimicrobial therapy guideline recommendations are based on the severity of the disease. In addition to antimicrobial therapy, other effective strategies include monoclonal antibodies, fecal microbiota transplantation (FMT), the administration of non-toxigenic C. difficile strains, and surgical consultation, all of which have been documented to be effective treatment for some cases. While some studies in the medical literature have noted that probiotic therapy is safe and effective in treating and preventing CDI, other studies have found no benefit with probiotic administration in the prevention of CDI. Therefore, currently probiotic therapy is not recommended for the therapy of CDI due to the limited data and/or potential risk of bloodstream infection. Currently, there is still having no effective vaccines against CDI available, but three C. difficile vaccines are now in different stages of clinical trials.

Due to the limited available therapeutic agents and lack of effective vaccines, active prevention has an increasingly important role in the management of CDI. As most CDIs are hospital acquired, and C. difficile is commonly present in healthcare facilities, measures aiming at preventing the spread of the disease in healthcare facilities should be implemented. Environmental cleaning and disinfection are particularly important for reducing C. difficile transmission and lowering the incidence of CDI. Because antibiotic use is regarded as the most important risk factor for CDI, antibiotic stewardship is also important aspect for the prevention and control of the disease. Finally, since C. difficile is able to colonize the intestinal tract of many animals, and the bacterium and its spores are commonly found in meats, fish, fruits, and vegetables, proper managements of animals, especially those that are in close contact with humans on a daily basis, and/or animals that humans consume as food, and good food habits such as washing meats, fish, fruits, and vegetables as well as thoroughly cooking meats and fish before eating may also contribute to the prevention of the disease.