Collateral damages and self-inflicted scars by inflammation in cardiovascular diseases

Inflammation is a double-edged sword used by the body to initiate the healing process. However, persistence of immune responses can cause progressive destruction of tissues culminating in self-destructive autoimmune reactions which is a hallmark of many diseases.  We hypothesized that autoimmunity is a key player in atherosclerosis or hardening of arteries that causes cardiovascular diseases (CVD). Indeed, patients with wide range of autoimmune diseases such as systemic lupus erythematosus, antiphospholipid syndrome, rheumatoid arthritis and type 1 diabetes, suffer from higher incidence of CVD. 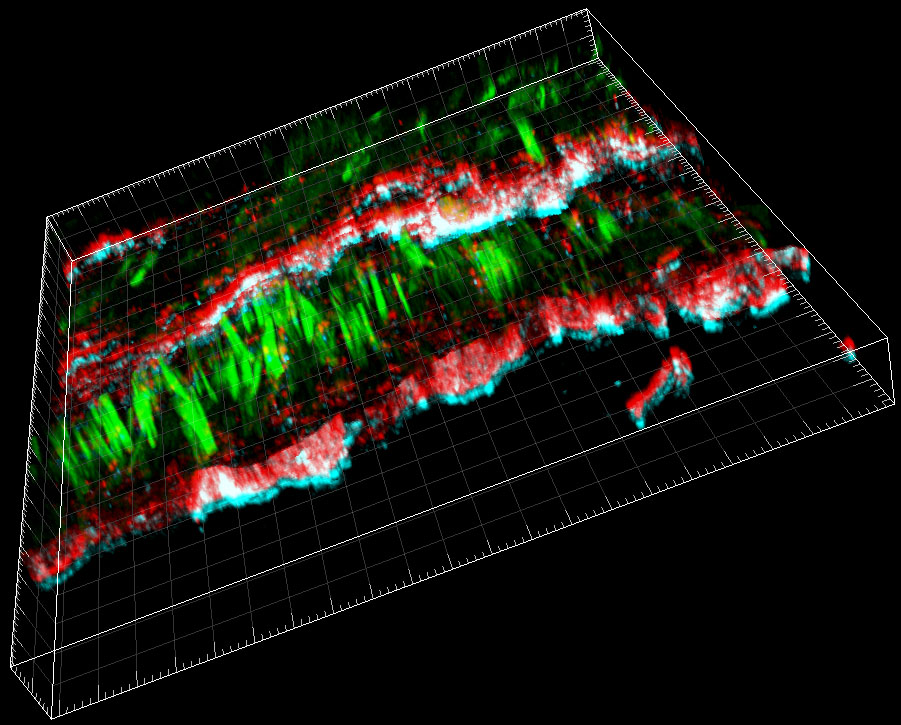 New evidences of autoimmunity-driven atherosclerosis. A cross section of aortic lesion was examined by confocal microscopy. 3D projections were digitally reconstituted from stacks of confocal optical slices. Immuno-histochemical analysis reveals “waves” of auto-antibodies (red) that creates “a molecular tsunami” leading to the buildup of lesions in the arteries. Green thunder-like shapes are smooth muscles . White and cyan blue staining colocalizes with some molecular targets of autoimmunity (here actinin).

The aims of our study was to uncover the mechanisms of autoimmunity-accelerated atherosclerosis and identify the molecular targets of  autoimmunity in the arteries. We created a mouse model combining autoimmunity (by silencing FcRIIB gene,  involved in self-control of immune reactions related to antigen production) and hyperlipidemia (which confers to mice high susceptibility to develop  atherosclerosis).  This  strategy allowed us to have a closer and dynamic look at the buildup of lesions in the arteries which may be considered  as a battlefield involving the immune defensive army and other molecular belligerents in the vascular wall. Moreover, we used for the first time in this setting an autoantibody-based proteomic approach, which is a setting of simulated confrontation capable of revealing affinities between antibody-mediated immunity and many potential molecular preys. By using this approach, we were able to collect  information and identified many specific targets of autoimmunity using proteomic database.

With this intelligence in hand, we did a “forensic examination” of the arterial battlefield by tracing (immunostaining) the different players which we monitored using high resolution microscopy. We were able to find the smoking gun of the immune system (autoantibodies) in “crime scenes” around cell debris and dead cells (necrotic cores). Other evidences were  revealed  showing autoimmunity in flagrante delicto  confronting local cell crowds gathered at the vascular wall (at the junctions separating different cell type layers).

The decryption of these experimental files suggests that excessive responses and strong-handed tactics by the immune system which is, in normal host defense, aiming at restoring peaceful resolution of conflicts and healing, can cause civil disturbance and wars. These inflamed conditions promotes the creation of atherosclerotic lesions. Indeed, the vascular war zone results in the buildup of “barricades” where immunity soldiers are entrenched and using their arms at locals and bystanders. This vicious circle of inflammatory responses keeps adding fuel to the never-ended fire and leads to many collateral damages.

This chaotic situation may occur because of immunoregulatory defects or when the immune defensive system is exhausted and overstretched by multiple overwhelming activities such as massive housekeeping duties related to hyperlipidemia and inflammation (e.g. removal of excess of lipids, promoting healing after extensive injury, elimination of immune complexes, etc..).

In summary, using an experimental model of autoimmunity-accelerated atherosclerosis and an autoantibody-based proteomic approach, we demonstrated that autoimmunity targets an unprecedented panel of 25 neoepitopes from 19 distinct proteins within the aortic wall, which we termed  “vascular autoimmunosome”. These proteins are involved in vital cellular processes linked to cell adhesion and junctions, the extracellular matrix and other housekeeping functions. We present evidences connecting defective housekeeping and clearance machinery of phagocytosis to the generation of these post-necrotic neoantigens.