Electrochemistry / mass spectrometry ( EC / MS ) has many applications in science and industry such as drug discovery, elucidation of redox mechanisms, identification of drug metabolites, and online chemical derivatization for improving analytical figures of merit such as ionization efficiency, sensitivity, and selectivity. Typically, EC flow cells are combined with electrospray ionization MS (EC/ESI-MS; Fig 1a), an expensive configuration that is susceptible to carry over effects, not easily amenable to studies of complex multicomponent reactions, and difficult to arrange in high-throughput configurations. 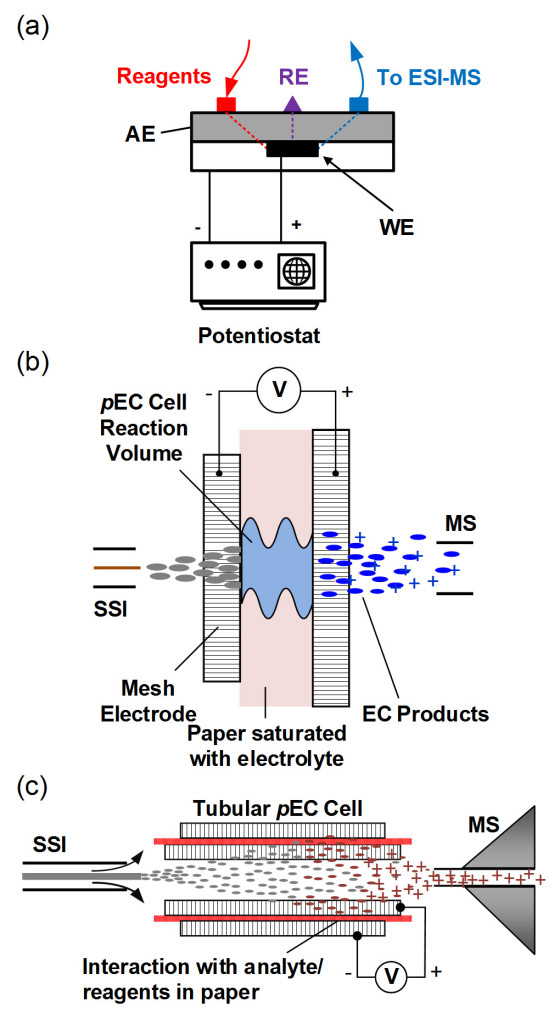 In recent years, there has been significant interest in paper-based devices (PAD) for analytical and biosensor applications because they are cheap, malleable, disposable, easy-to-use, and simple. Paper-based electroanalytical devices (ePAD) offer the potential for high sensitivity and low limits of detection. Online coupling of paper-based EC cells to MS (pEC/MS) would provide a new set of analytical techniques and applications, as well as provide mechanistic information about pEC processes that could improve performance of ePAD.

Recently, we introduced pEC/MS (Fig. 1b and 1c), a technique that involves directing a microdroplet spray containing reagents or analytes towards a pEC cell. Application of a potential difference across stainless steel mesh electrodes generate intermediates and products in the paper electrolyte layer (saturated with KCl), which are then rapidly extracted into secondary microdroplets that travel to the mass spectrometer. The pEC cells are thin, flexible, cheap, modular, and disposable, enabling various physical configurations (Fig. 1b and 1c show planar and tubular configurations). The short electrode-paper-electrode path length in planar pEC/MS (~500 µm; Fig. 1b) and high velocity of the SSI microdroplets (~ 150 m/s) results in response times on the order of hundreds of milliseconds, providing fast analytical measurements and enabling capture of short-lived EC reaction intermediates. Another advantage of pEC/MS is minimal carry over effects and cross-contamination through the use of a fresh pEC cell or impact spot on the paper electrolyte layer for each analysis. Using a fresh spot also enables high-throughput experiments in which several EC transformations and reagent systems can be investigated with a single pEC cell. The benefits, performance, and capabilities of pEC/MS are briefly described below using planar pEC/MS to probe reaction mechanisms and detect analytes having poor ionization efficiencies. Generally, pEC cells make it easier to use EC online with MS. 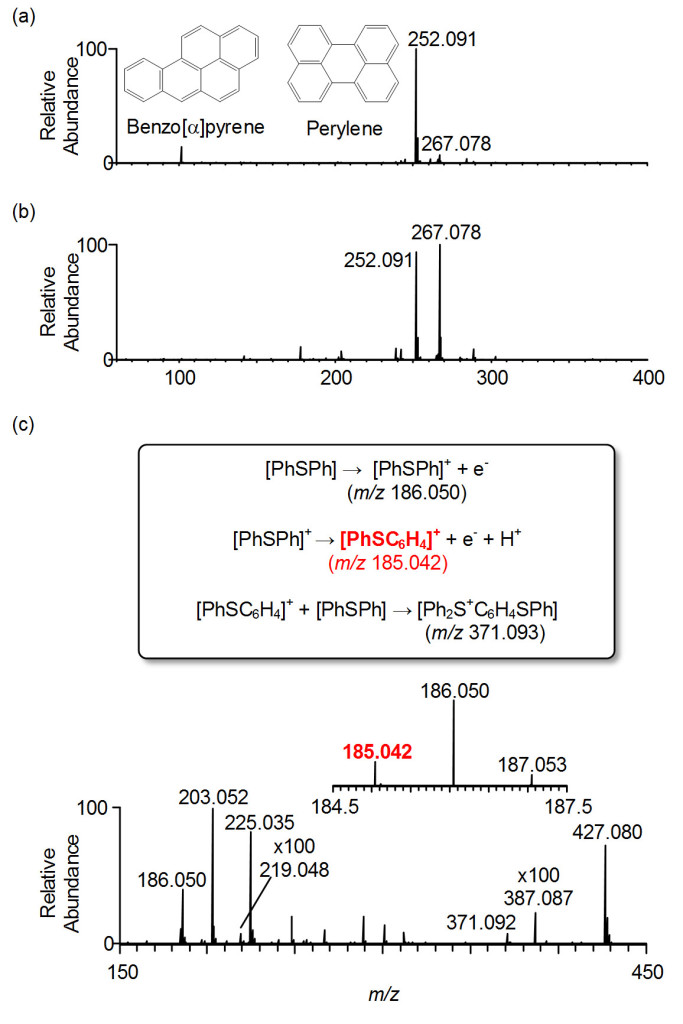 It is often necessary to characterize non-polar compounds such as such as polycyclic aromatic hydrocarbons (PAH) in crude oil. Carcinogenic PAH such as benzo[α]pyrene (BAP) and perylene (PER) isomers are undetectable by SSI-MS owing to their low ionization efficiencies. Using a planar pEC cell configuration, oxidation of a BAP:PER (9:1) mixture yields an intense radical cation signal at m/z 252.091 ([BAP]·+:[PER]·+; Figs. 2a and 2b), improving sensitivity and the limit of detection. The ion signal at m/z 267.078 forms from EC reaction of BAP and PER with water. The relative rates of BAP and PER reaction with water produce 252.091/267.078 intensity ratios that distinguish these isomers in acquired mass spectra (Fig. 2a and 2b).

Another important application of EC/MS involves identifying intermediates to understand redox processes. An important feature of pEC/MS is its high temporal resolution (~500 ms). Using, pEC/MS we identified a previously undetected intermediate [PhSC6H4]+ (m/z 185.042) during EC oxidation of diphenyl sulfide [PhSPh]·+ (m/z 186.050) to pseudodimer sulfonium ion (Ph2S+C6H4SPh; m/z 371.093), confirming a previously proposed mechanism  (Fig. 2c). The high velocity of the microdroplet spray rapidly transfers species generated at the electrode-paper interfaces into the gas-phase, enabling short response times and capture of intermediates with lifetimes on the order of hundreds of milliseconds.

The results described above and in J. Am Soc. Mass Spectrom. 2015, show that pEC cells operate on time scales amenable to MS, providing easy access to EC applications that improve analytical figures of merit such as ionization efficiency, sensitivity, and selectivity. In addition, the short response time of pEC/MS enables detection of fleeting EC reaction intermediates, a feature that has potential to advance our understanding of EC processes and provide new types of portable EC/MS devices for field applications.

Figures 1b, 1c, and 2 were reproduced from “Yao-Min Liu and Richard H. Perry, Paper-Based Electrochemical Cell Coupled to Mass Spectrometry, J. Am Soc. Mass Spectrom. 2015, 26(10): 1702-1712 (© American Society for Mass Spectrometry, 2015)” with slight modifications and with permissions of Springer.