Historically, the neurotransmitters function were analyzed only in animals with nervous system, and their initial role was associated mainly with the transmission of nerve (electrical) impulses. In the last decade of the 20 century, new views on neurotransmitters such as acetylcholine and biogenic amines (dopamine, noradrenaline, adrenaline, serotonin and histamine) have been formed because the compounds were also found in plants and microorganisms as well. 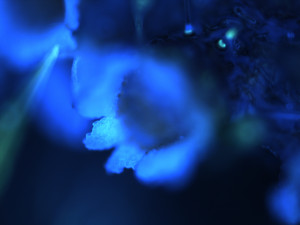 Fig. 1. Image of fluorescent products as a reaction on the presence of dopamine and noradrenaline on egg input of butterfly Vanessa sp. seen on the leaf of stinging nettle Urtica urens.. Both plant and insect contain the neurotransmitters, but in later the concentration is higher.

Therefore above-mentioned substances have appeared in ancient time, and their functions were changed during evolution of organisms. Neurotransmitters (better to call biomediators) may play universal role as elementary molecular agents of irritability in any living cell -animal, plant and microbial. The other functions of the substances are also known. They participate in the information processes in any cell and many functions in organism as a whole – from changes in ion permeability of membranes, energetic and metabolism to complex processes such as a fertilization, motility and lastly germination, growth and morphogenesis. Moreover, via the sensitivity to the universal compounds different organisms may communicate in Nature. The relations are from cooperative to parasitar. Other words, acetylcholine and biogenic amines may be considered as elementary units of irritability as one of the main characteristics of all living things.