Currently, ultrasound imaging is predominantly done by a probe that possesses many transducers, which are small devices that transmit, and then receive, acoustic waves. Decreasing the number of transducers, while maintaining image quality, is surely a desirable end, inasmuch as it reduces hardware complexity and cost. One way to achieve this goal is to make use of Compressive Sensing (CS), a rather recent and novel method of sensing that allows image reconstruction with fewer data than what other methods would require. 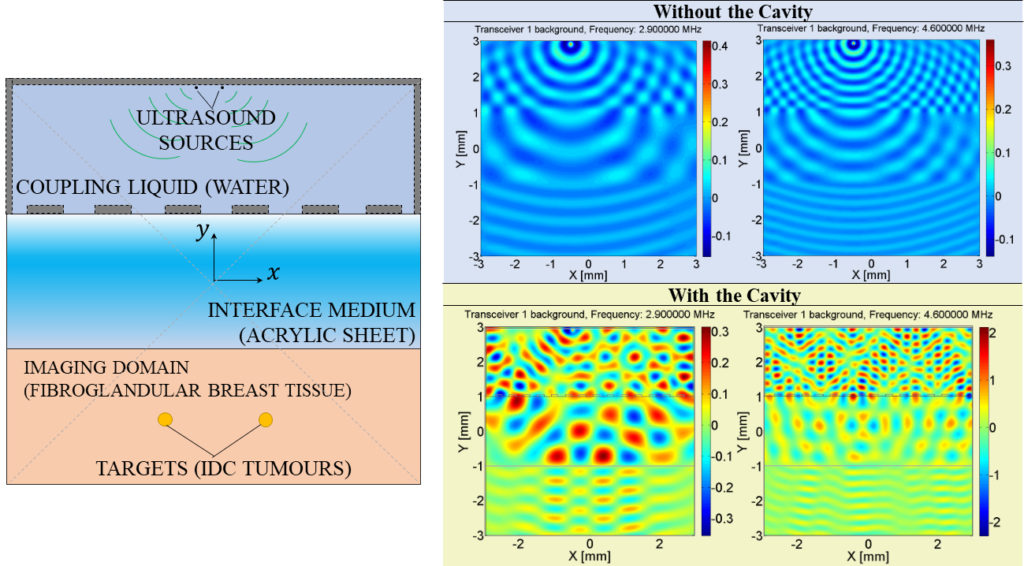 Fig. 1. (Left) The simulation geometry including two ultrasound transducers (point source) in water, an acrylic sheet, and a uniform medium (fibroglandular tissue of the breast) encompassing two targets (IDC tumors). The cavity (displayed in gray, around the water domain) can be present or absent in the data acquisition process. (Right) In the absence of the cavity, the waves propagate with very similar shape and behavior at different frequencies. But, when the cavity is added to the system, the behavior of the waves becomes dissimilar at various frequencies, reducing repeated data and giving us more useful information about the targets.

In CS, the fact that making the data that is collected from an imaging domain random can lead to more successful image reconstruction might, at first, seem counterintuitive. The reason why such observation might run counter to common logic is that one perhaps assumes that making the data random will cause loss of useful data from the target that is to be found in the domain. But, looking at the matter more closely, it is not difficult to realize that when data is randomized at disparate frequencies—so that at each frequency, ideally, a unique data is collected—the count of repeated data will go down and more useful data will become available. Thereby, as it has been shown in previous research, particularly in optics and electromagnetics, using masks, lenses, and reflectors that have a randomizing feature in them (such as a randomly uneven surface), with different responses at dissimilar frequencies, can significantly enhance imaging performance with limited data.

The same idea has been applied in this research by using a solid cavity that has slots (in a two-dimensional geometry, or holes in three dimensions) at its bottom. A cavity by itself exhibits dissimilar behaviors at different frequencies, especially due to having various resonant modes (similar to what is seen in many musical instruments, such as a flute), and the addition of slots (holes) renders these modes even more unique (Fig. 1, right side). In this work, two transducers were used to send and receive ultrasound waves at 81 frequencies, chosen equidistantly between 2-10 MHz, and two targets (early breast tumors, 100 microns in diameter) were located in a homogenous domain (fibroglandular tissue of the breast) as to-be-detected targets. Imaging was done by means of a CS optimization algorithm, known and abbreviated as ADMM.

The two-dimensional imaging results with and without the cavity were compared and it was shown that resolution, especially in cross-range, was significantly improved, delineating the targets more clearly, when the cavity was present (Fig. 2, middle row). The enhancement in the ability to focus the acoustic waves at a point was also lucidly observed in the presence of the cavity (Fig. 2, top row). It was also curious to investigate how the material of the cavity affects the results and an aluminum cavity proved to perform better than a plastic one in the absence of noise. However, when noise was added to the collected signals, only plastic cavity could image the inclusions (Fig. 2, bottom row).

Fig. 2. (Top) The ability to focus the ultrasound waves at a point is significantly improved using the cavity, with the aluminum cavity being superior to the plastic one. Side lobes are almost absent in the case of aluminum cavity. (Middle) Cross-range resolution (in the horizontal direction) in the images of the targets is clearly enhanced in the presence of the cavity. Aluminum cavity, again, surpasses the plastic one, in improving the resolution. (Bottom) In the presence of noise (with a signal-to-noise ratio of 15 dB), only the plastic cavity can image the targets, showing that the plastic cavity might perform better than the aluminum one in resistance to noise.

The implications of this proof-of-concept research are extensive as they pave the way for low-cost and fast-acquisition ultrasound imaging systems. One way to look at this potentiality is to note that in such CS systems, the complexity of imaging is shifted from the system’s hardware (data acquisition by a relatively low number of measurements) to its software (the CS imaging algorithm), lowering costs and increasing efficiency. Two research works, following this one, are under the publication process; one looks at another innovative method to randomize acoustic waves and the other extends the same cavity idea from two to three dimensions, using only a single transducer.