Confabulation: What is associated with its rise and fall? A study in brain injury

Confabulation is a relatively rare but debilitating memory disorder. It affects mainly (but not exclusively) brain injury survivors. Patients with confabulations have false memories, for example believing something happened to them which never in fact took place, or believing that something that happened many years ago, only took place yesterday. They do not realise they are mistaken, even when it is pointed out to them. Little is known about what causes confabulation, how it evolves over time and why it usually gets better. 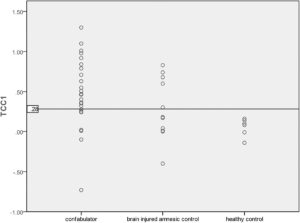 The aim of this study was to investigate the kinds of cognitive and emotional factors that are found in patients with confabulations, and whether they can predict who will do well or badly over time.

24 confabulating participants were compared with 11 brain injured survivors and 6 healthy controls on measures of cognition and emotion that have been shown to be linked to confabulation. These measures included: a. ‘temporal context confusion’ (TCC). TCC is a measure of a participant’s failure to update their memories in response to incoming external information; in other words, the degree to which they appear to be ‘stuck’ in the past; b. measures of mood state (elation, depression); and c. a measure of lack of insight which was specifically developed for this study. The participants were also tested in terms of their autobiographical memory, i.e. how well they remembered events from their life, and their executive function, i.e. how good they were at planning, problems-solving, organising and monitoring their thinking and behaviour.

There were two parts to the study. First, we compared confabulators with the other two groups. Second, we followed up the confabulators over 9 months to see what factors seemed to predict who recovered and who remained unwell.

We found that temporal context confusions (TCC) were more common in confabulating patients than in healthy controls (Fig. 1). Although the decline in errors on the TCC measure went in parallel with a reduction of false memories during recovery from confabulation (Fig. 2A), the two did not correlate closely together. We found that elated (over-optimistic) mood and lack of awareness of their own difficulties were increased in confabulating compared with non-confabulating patients (Fig. 2B), but these measures also did not correlate with either the severity of confabulation or change in confabulation scores over time. The strongest predictors of the severity of confabulation at the initial assessment and changes over time (over 9 months) were the severity of memory deficits (especially on autobiographical memory) and errors on executive tests (particularly in making cognitive estimates, such as estimating how fast can horses gallop); greater autobiographical memory and executive deficits were associated with more severe confabulation, and improvement in these measures was associated with a decline in confabulation.

Confabulation: What is associated with its rise and fall? A study in brain injury.
Bajo A, Fleminger S, Metcalfe C, Kopelman MD
Cortex. 2017 Feb