Confronting the paradox of irrigation efficiency

Why does the term ‘efficiency’, when applied to the irrigation sector, cause such confusion and misunderstanding? And why is promotion of increased irrigation efficiency likely to hinder achievement of the Sustainable Development Goal (SDG) 6: ‘Water for All’?

Increased efficiency implies ‘more for less’—more miles per gallon; more kilowatt hours per tonne of coal, etc.  In these cases, inefficiency implies waste:  energy that is not converted into motive power or electricity is lost as heat or steam into the atmosphere.

For the farmer, irrigation efficiency is the ratio of the volume of irrigation water beneficially consumed in crop production divided by the volume of water withdrawn or delivered to the farm.  The primary objective of increasing irrigation efficiency is to maximise such consumption—the very process that generates biomass, yield, and income—and to minimise ‘losses’ that consist primarily of runoff to drains and percolation of water below the root zone. 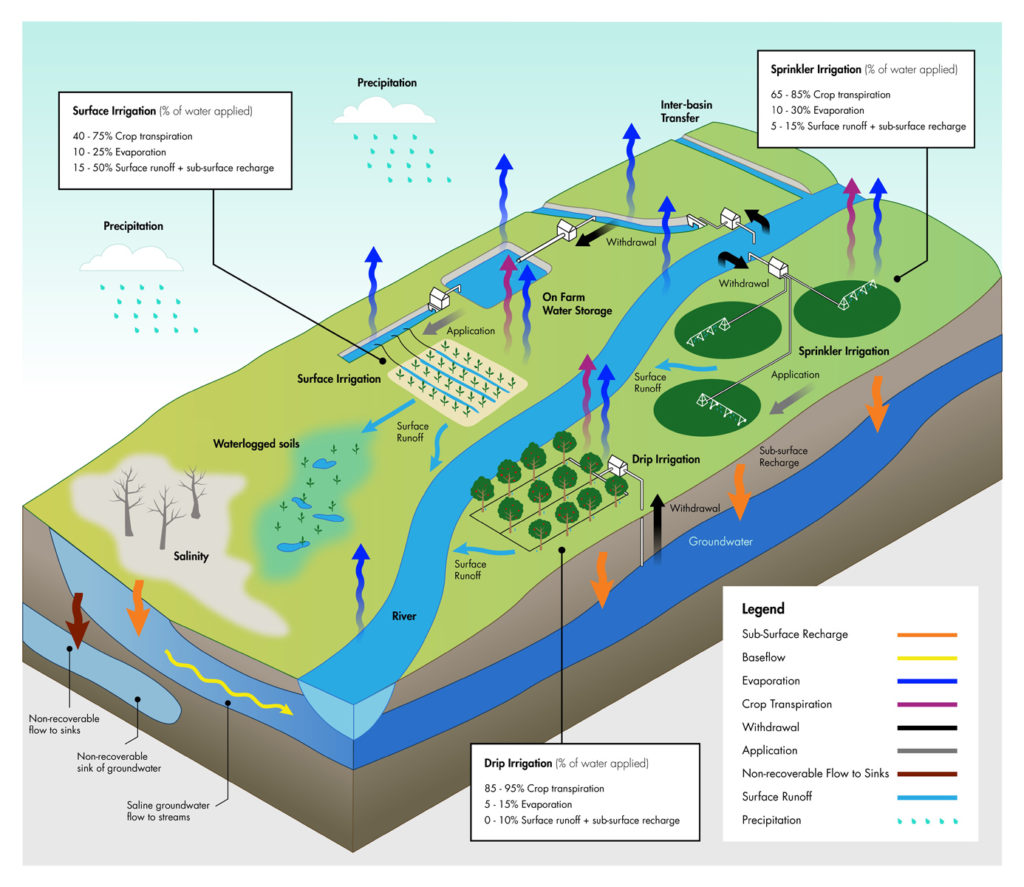 Unlike the losses from inefficient petrol engines and power stations, on-farm water ‘losses’ are return flows of water to the physical environment that can often be recovered and reused elsewhere. In other words, a return flow that provides no benefit to the individual irrigator does have value to other users, including the ecosystem.  If these return flows from an irrigator’s fields are not properly accounted for as irrigation technology is modernised and efficiency is increased, there are likely to be unintended consequences, namely, reduced water availability for other uses.

The paradox of irrigation efficiency is a major impediment to achieving SDG 6: Water for All, because irrigation is responsible for 70% of global freshwater withdrawals. The policy and water conservation challenges arise when governments promote increased irrigation efficiency. If this is not done without accounting for return flows, water is effectively transferred from one group of water users and will, typically, fail to reduce local water consumption.

In parallel with this physical transfer of water consumption to the more irrigation-efficient farmer, the same process increases the value of water delivered to that irrigator, generating an increase in economic demand for scarce water.

We demonstrate the paradox analytically, and with multiple cases including in: (1) Rajasthan, India whereby subsidies for farmers to use drip irrigation have increased the volume of water locally applied and consumed (Fig. 1); (2) the Snake River, Idaho whereby farmers, who have increased their irrigation efficiency over time, have collectively reduced groundwater recharge and the volume of water in the Eastern Snake Plain Aquifer; and (3) in the Souss and Tensift Basins of Morocco where the adoption of drip irrigation, supported by subsidies, has reduced recharge to over-exploited aquifers.
We explain that the water conservation challenge arising from the paradox can be mitigated by five key steps. First and foremost, physical water accounts are needed from the farm scale to the basin scale to make transparent ‘who gets what, when and where’. Second, control of water withdrawals is required to limit consumption to sustainable levels—often implying limits to the irrigated area. Third, water (including in-stream flows) must be valued to ensure that the public benefits of irrigation efficiency subsidies exceed their costs. Fourth, risk assessments are required of the effects of increases in irrigation efficiency, including the impacts on inflows and outflows. Fifth, a much better understanding is needed of the incentives that determine irrigators’ behaviour as irrigation efficiency increases.  These five steps are required to avoid or to mitigate the unintended consequences of increased irrigation efficiency, namely, reduced stream flows and aquifer recharge that can impose very large costs on other water users and threaten riparian environments.